Nicki Minaj doesn’t exactly strike us as someone we would want to mess with.

The Hip Hop queen has never shied away from telling folk how she really feels and at Sunday night’s BET Awards in Los Angeles’ Nokia Theatre she was gunning for one lady in particular.

Minaj accepted the award for ‘Best Female Hip Hop Artist’ for the fifth year in a row and while she was onstage thanking fans, in true Minaj style, she made sure to take a not-so-subtle pop at one of her fellow category nominees, Iggy Azalea.

The 31-year-old poked fun at rumours that Azalea works with ghostwriters such as mentor TI, with whom she performed alongside at the award ceremony. 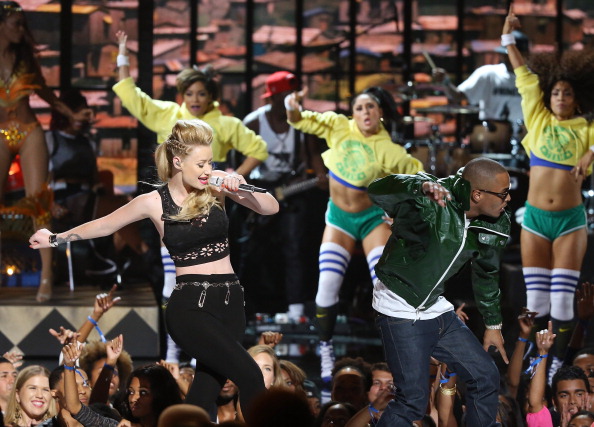 END_OF_DOCUMENT_TOKEN_TO_BE_REPLACED

In a bizarre turn, Minaj then explained to the audience that she would rather die than phone an ambulance and have notorious gossip site TMZ write about her.

"The other day, literally I didn't tell anybody this, I really thought I was about to die. Like, I was saying my prayers to die. And I didn't even want to call the ambulance because I thought, `Well if I call the ambulance, it's going to be on TMZ"'.

Nicki continued to shoot from the lip and finished her speech by saying, “I hope and pray that BET continues to honour authenticity”.

popular
Vicky Phelan says she wants to pass away in holiday home "for the kids' sake"
Scotland international rugby star Siobhan Cattigan tragically dies, aged 26
Meabh Feerick passes away after sharing that she felt "let down" by Irish healthcare system
Why Are Men so Obsessed With Boobs? The Answer is Pretty Surprising...
Ashley Cain decorates baby Azaylia's grave for Christmas
Vicky Pattison thanks fans for support after doctors find ovarian cyst
How to INSTANTLY unblock your stuffy nose (we swear this works)
You may also like
2 years ago
Turns out, this colour of wine gives you the WORST hangover
5 years ago
Pretty Little Liars actor Brandon Jones could be facing over five years in prison
5 years ago
Gwen Stefani Receives Massive Backlash After "Insulting" April Fools' Prank
5 years ago
Katie Price Names And Shames The Twitter Trolls Bullying Her Son Harvey
5 years ago
Kim Kardashian Blasts "Body-Shaming and Slut-Shaming" In Brilliantly Honest Post
5 years ago
WATCH: Emma Watson Launched HeForShe Arts Week On International Women’s Day
Next Page