Richard Madden has been around for a while now, however recently with the popularity of Bodyguard on BBC (it was recently released onto Netflix), the actor is having a moment.

We wanted to find out a little bit more about the gorgeous Scottish man, so we did a little digging and found these bits out:

His accent is real

If you've wondered whether Richard's accent in the Bodyguard is real, it most certainly is.

He grew up in Elderslie, Renfrewshire, just outside the city of Glasgow, and has younger and older sisters. His mam's name is Pat and she's a classroom assistant, while his dad is called Richard and he's a firefighter.

Great night at the @evening.standard theatre awards ??. Congratulations to all the winners! Have just about recovered now... Thank you @ferragamo for the perfect tux. Styling @stylegazer1 Grooming @charley.mcewen

Yep, Laura Whitmore was apparently linked to Richard several years ago. What happened in their romance and for how long they went out, we don't know... but we do know that we're maybe, kinda, sorta a bit jealous?

They include Jenna Coleman, Suki Waterhouse and most recently, Ellie Bamber (they broke up mid-2018, so he's newly single, ladies). 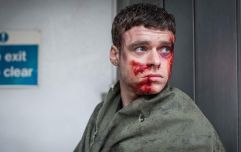 END_OF_DOCUMENT_TOKEN_TO_BE_REPLACED

Uh huh! He was spotted this week with his housemate, 13 Reasons Why's Brandon Flynn. The pair were seen making their way back from a super market (where they were buying marijuana cigarettes).

Brandon is also known for dating Sam Smith not so long ago.

He was the Prince in the live action remake of Cinderella

We only realised this yesterday! In the 2015 live action remake of Cinderella, Richard played Prince Kit.

He was all decked out in royal clothing and danced the night away with Cinderella - who was played by Lily James.

He could be the next James Bond

Rumour has it that he's been compared to Sean Connery and is reported to have been offered the role of James Bond to succeed Daniel Craig. He has said that he is "flattered and thankful" to be considered for the role.

popular
QUIZ: How well do you remember The Princess Diaries?
Will Smith admits to 'failing miserably' in 21-year marriage to Jada Pinkett Smith
James Franco Has Opened Up About His Relationship With Lana Del Rey
Here's what happens on every day of your menstrual cycle (roughly)
Why Are Men so Obsessed With Boobs? The Answer is Pretty Surprising...
Remember Christian From Clueless? This Is What He Looks Like Now
QUIZ: How well do you remember the 2005 movie Pride & Prejudice
You may also like
11 months ago
Everyone's devastated that Richard Madden didn't get an Emmy nom for Bodyguard
1 year ago
Looks like we may have to wait a bit longer for season two of Bodyguard
1 year ago
YES! Bodyguard writers are officially 'in talks' about season two
1 year ago
Jamie Redknapp just revealed his dream job, and we fully support it
1 year ago
Richard Madden has been chatting about Bodyguard season two and our bodies are ready
1 year ago
Richard Madden speaks out against 'unrealistic' body standards for men
Next Page