"Next year, the more the merrier."

Netflix have announced they are releasing a sequel to the Christmas movie, The Christmas Chronicles.

The festive film, which starred Kurt Russell as St. Nick himself, debuted on the streaming service last year - where it instantly captured the hearts of fans across the globe.

And taking to social media on Friday night, Netflix announced some really good news: there's a sequel on the way.

Not only will Russell be returning as Santa Claus, but it looks like there will be more of the actor's real-life partner, Goldie Hawn, as Mrs. Claus.

There isn't much else known about the sequel, besides the fact that it is "coming next holiday season."

But either way, we already can't wait. 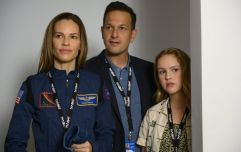 END_OF_DOCUMENT_TOKEN_TO_BE_REPLACED

If you're looking for more information on what else is landing on Netflix this Christmas, here are 7 Christmas movies and shows to keep an eye out for this holiday season.

Netflix also recently added A Cinderella Story: Christmas Wish to their catalogue, in case you're looking for another holiday film.

And you can find the codes to unlock all the Christmas movies on Netflix right here.

popular
Glossier: A first-time buyers guide to this cult beauty brand
QUIZ: How well do you remember The Princess Diaries?
J.K. Rowling has signed an open letter calling for the end of cancel culture
Someone has ranked the penis size of men from all over the world
James Franco Has Opened Up About His Relationship With Lana Del Rey
Our beloved Letterland characters - Where are they now?
Ellie Goulding Just Got Her Revenge On Ed Sheeran Over THAT Break-Up Song
You may also like
2 days ago
Dead To Me will be back for a third and final series
5 days ago
QUIZ: How well do you remember The Rugrats Movie?
6 days ago
New on Netflix this week: Angela's Ashes and Atonement
1 week ago
CONFIRMED: Ozark to return for an expanded fourth and final season
1 week ago
Netflix's Never Have I Ever has been renewed for a second season
2 weeks ago
WATCH: The first trailer for Netflix's The Baby-Sitters Club reboot is here
Next Page