The makeup artist was tuned in last night.

Last night saw Dec Donnelly host Saturday Night Takeaway by himself for the first time in the show’s 15 seasons.

Dec thanked fans for their support after he hosted the show without his longtime presenting partner, Ant McPartlin, for the first time.

Walking onto the set last night, Dec appeared to be visibly nervous - but that soon began to fade away when he got a standing ovation from fans.

The host received huge praise on Twitter from the general public and celebrities alike, with pretty much everyone delighted to see the show go off without a hitch.

One person who also shared support for the presenter was Ant McPartlin’s estranged wife, Lisa Armstrong.

The makeup artist and longtime friend of the presenter ‘liked’ a string of tweets from viewers who congratulated Dec on his performance on the show last night. 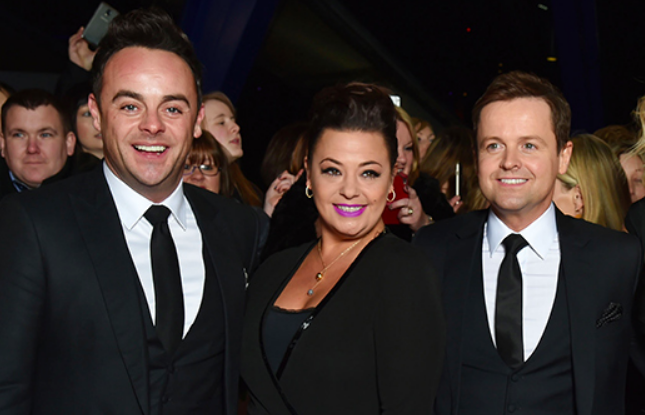 END_OF_DOCUMENT_TOKEN_TO_BE_REPLACED

From Ashley Banjo to Mark Wright, Lisa seemed to agree with the general consensus – Dec did brilliantly.

“Tonight’s episode of SNT was a triumph,” read a tweet from Corrie star Anthony Cotton that Lisa ‘liked’.

“Bravo to Dec. I’ve known those boys for 20 years, and they’ve been nothing but gorgeous to be friends with.” 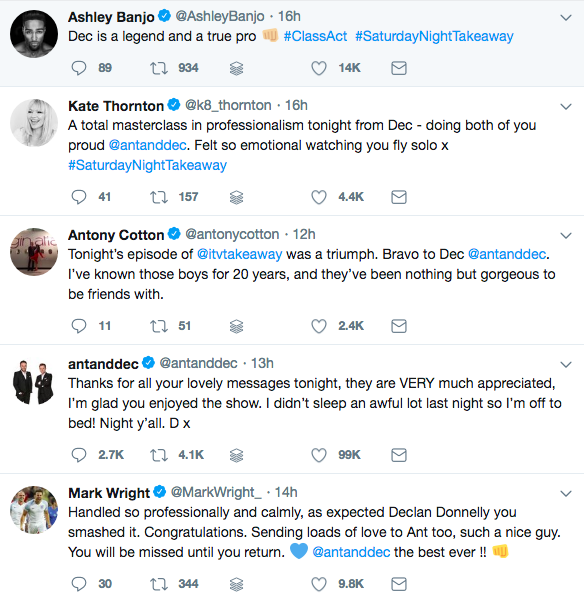 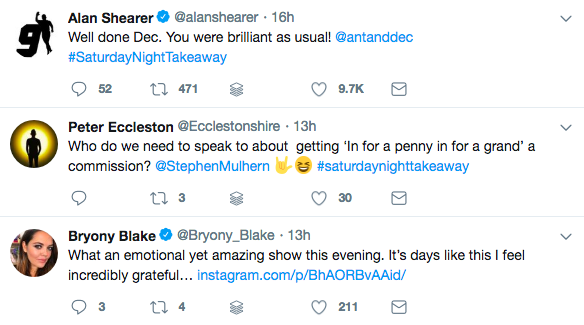 “Has the country ever wanted one person to do so well as much as tonight?”

Has the country ever wanted one person to do so well as much as tonight? #SaturdayNightTakeaway pic.twitter.com/wB95goS5b7

Ant made the decision to pull out of the remaining two episodes of the show after he checked back into a treatment facility after he was charged with drink-driving.

Lisa and Ant announced they were to divorce back in January after 11 years of marriage.

Girls With Goals || Her · Ep.161: Feeling Peachy - Sharon Keegan of Peachylean on being an absolute BOSS!
popular
Friends fans spot massive body double blunder in episode rewatch
Vicky Phelan "finally getting excited about coming home"
Love Island's Chloe Crowhurst injured in "serious car accident"
The DIY frozen coffee recipe that's so delicious you'll never pay for an iced latte again
TikTok star sentenced to 10 years in prison over "human trafficking"
Couple who can't agree on child’s name decide to each call her different things
"I was holding out for more the entire time": Why do so many of us go back to our exes?
You may also like
2 weeks ago
What a throwback: The first trailer for the iCarly reboot has dropped
2 weeks ago
The OC stars call Mischa Barton's bullying claims "completely false"
3 weeks ago
Holby City cancelled by BBC after 23 years on air
3 weeks ago
Kate Winslet refused to let director edit "bulgy bit of belly" from Mare of Easttown sex scene
3 weeks ago
Kate Winslet would "absolutely love" a second season of Mare of Easttown
3 weeks ago
We have an official date for Season 3 of Virgin River – and here is what we know so far
Next Page