Even though Ariana Grande has two dates in Dublin, they sold out very quickly. Both dates, the 22 and 23 September, went on sale at the same time, and within minutes the tickets for the two days were snapped up.

Well, those that missed out need not worry because the singer has just announced that she has added one more Dublin date.

Due to phenomenal demand @ArianaGrande has announced a 3rd and final date at @3ArenaDublin on 25 September. #Tickets go on sale this Friday at 9am https://t.co/tJ47w5VwZr pic.twitter.com/Gd9BHlWVfw 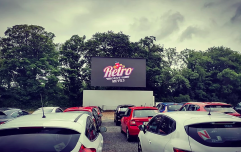 END_OF_DOCUMENT_TOKEN_TO_BE_REPLACED

The new date is September 25 and tickets for that date will go on sale Friday, March 1 at 9am. If we were you, we'd be on ticketmaster at nine of the dot.

Produced by Live Nation, The Sweetener World Tour kicks off March 18 in Albany, New York and will cross North America through June, before heading across the Atlantic beginning in London on August 19, culminating in Zurich on October 13

Girls With Goals || Her · Ep.160: The Beauty Of Coaching - Hayley Harrison joins us from Sport Ireland
popular
Regé-Jean Page arrives in Ireland to shoot new movie
A pink tampon disposal glove has been created - by three men...
486 jobs lost as Carphone Warehouse closes in Ireland
Police shoot and kill teenage girl in Ohio as George Floyd verdict announced
Kate Middleton has addressed the rumours that she's pregnant with her fourth child
Lyrid meteor shower to be visible from Ireland tomorrow
Fulfil launch new chocolate caramel protein bar... into space
You may also like
1 month ago
Woman arrested after multiple Garda cars chase vehicle from Ballymun to Wicklow and back
1 month ago
Teenager seriously injured in Dublin shooting
2 months ago
Deliveroo workers in Dublin seek meeting with Gardaí over threat of knife attacks
2 months ago
Central Bank to become the new headquarters for Pokemon
2 months ago
Teenage boy stabbed to death in Dublin
4 months ago
3 Dublin Christmas markets we're dying to check out this weekend
Next Page