"She loves the show as much as I do."

Caroline Flack has said she is "glad" that Laura Whitmore is replacing her on Winter Love Island.

The 40-year-old presenter announced that she was stepping down from the show earlier this week, after being arrested and charged with assault.

Whitmore was formally announced as her replacement today, confirming that she will indeed be jetting off to South Africa to host the first winter season of the show.

Flack has since taken to Instagram to give the Irish born presenter her blessing. 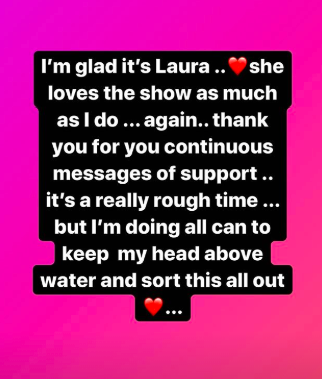 "Again, thank you for you [sic] continuous messages of support. It's a really rough time, but I'm doing all I can to keep my head above water and sort this all out."

Flack was charged with assault last week following an altercation with boyfriend, Lewis Burton. He has reportedly stated that he will not pressing charges.

Whitmore confirmed that she will be taking over hosting duties today alongside a photo of her own personalised Love Island water bottle.

"I will be hosting Love Island and Aftersun this series," Laura wrote on Instagram. "Whhhhaa???"

"To say I’m excited to be heading to Cape Town to host Love Island, the biggest show on television, is an understatement."

"I want to thank ITV for trusting me at the helm of this huge show," she continued. "I wish it was in better circumstances; Caroline is a brilliant host and friend."

END_OF_DOCUMENT_TOKEN_TO_BE_REPLACED

"We’ve spoken a lot in the last few days since she stepped down.

"She has been very kind to me and strongly pushed me for this role. I’ve watched her host every series and know I have big boots to fill. I will try and do it justice."