"What is she doing?"

We’re barely a week into the show and we’ve had enough arguments to fill an entire series.

Yes, it’s been going off inside the CBB house this year with housemates already threatening to walk... and we’re only six days in!

Well, as another argument kicked off last night, the attention of viewers at home was stolen by something else totally unrelated on the screen and they just couldn’t get passed it. 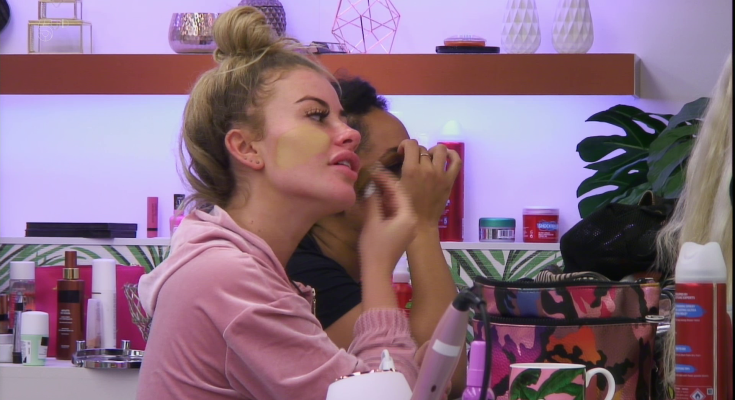 END_OF_DOCUMENT_TOKEN_TO_BE_REPLACED

While Gabby Allen and Natalie Nunn went head-to-head again in the bathroom, viewers were glued to Chloe Ayling as she applied her makeup.

The model sat while her housemates began to argue and continued to apply her foundation and viewers were shocked by the colour of it.

The argument might have been the main focus for showrunners but it was Chloe's beauty regime that had everyone on Twitter on talking.

Does Chloe know she’s wearing a foundation that’s about 10 shades too dark and it looks terrible ? #cbb

Seeing Chloe put that amount of foundation on with a sponge blender made me want to scream! Too much girl! #CBB

Yes, while Gabby and Natalie continued their screaming match, Chloe kept her focus on applying her makeup.

END_OF_DOCUMENT_TOKEN_TO_BE_REPLACED

Natalie called Gabby out for apparently not including the girls in her workouts and just inviting the boys. The resulting argument left Gabby in tears telling Big Brother that she wanted to leave because of “bully” Natalie.

Natalie is up for eviction this week against Hardeep. One of them will go home during Friday night’s show.

popular
Vicky Phelan says she wants to pass away in holiday home "for the kids' sake"
Scotland international rugby star Siobhan Cattigan tragically dies, aged 26
Stacey Solomon mortified after walking around shop in see through leggings
Meabh Feerick passes away after sharing that she felt "let down" by Irish healthcare system
Norma Foley addresses concerns over schools staying closed in January
You can now get Terry's Chocolate Orange mayonnaise
Why Are Men so Obsessed With Boobs? The Answer is Pretty Surprising...
You may also like
1 week ago
Everything we know about Selling Sunset spin-off, Selling Tampa
1 week ago
I'm a Celeb trials set to be different this year, producers say
2 weeks ago
Vogue Williams to host new body image show Send Nudes
2 weeks ago
Bake Off fans heartbroken after fan favourite leaves the tent
2 weeks ago
It's official, a Harry Potter cast reunion is taking place
5 days ago
I'm A Celeb bosses 'fear mass walkout' as three stars have medical treatment, report says
Next Page