Confirmed! A popular doctor is returning to Grey's Anatomy

If you thought there was unfinished business between Grey's Anatomy doctors Teddy Altman and Owen Hunt, it's been revealed that the pair will be reunited once again.

Yes, Kim Raver, who played Teddy on the show, is returning to the popular series and it's been suggested that she and Owen will pick up where they left off.

Although Teddy returned at the start of season 14 for a couple of episodes, it's thought that she will return for a longer period this time around. 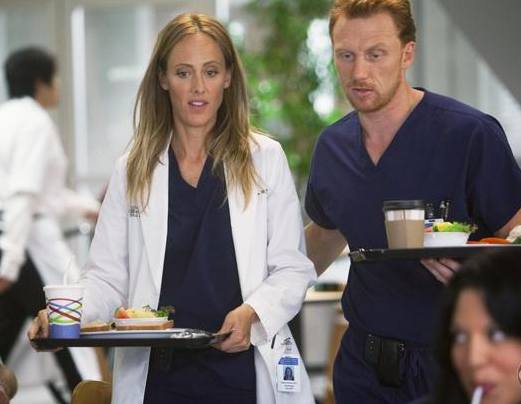 END_OF_DOCUMENT_TOKEN_TO_BE_REPLACED

Without giving too much away for anyone who hasn't caught up to the latest episodes, Teddy briefly returned to support Owen when he found out his sister Megan was alive.

The show is keeping the plot under wraps for now but it seems Owen is looking forward to his character embracing a new start.

As fans will know, his marriage to Amelia ended in divorce and now, a new start is on the horizon.

"I think he's going to have some fun finally. He's always chased this dream of being a father and having a child and having a family unit and I think his sister coming back, and all the guilt he carried with him for so many years, has all been lifted".

We're still holding out hope that Christina Yang will make a return to Grey Sloan Memorial at some point and the good news is she hasn't ruled it out completely.

popular
Late Late Show viewers are not happy with Ryan's questions for Billy Connolly
10 items from Zara for the perfect autumn capsule wardrobe
Friends actor James Michael Tyler has died, aged 59
Apparantly, there is one colour you should never wear at a job interview
The viral photo that can help women detect early signs of breast cancer
15 brilliant stocking fillers we are picking up from Penneys before they sell out
5 fabulous things to do in Ireland tomorrow for the Bank Holiday Monday
You may also like
3 months ago
Hope is missing from Virgin River season 3 - here's why
2 years ago
Tonight's episode of The Rotunda will have you in tears
2 years ago
Did you spot this massive Phoebe mistake in the first episode of Friends?
3 years ago
This is what First Dates' barman Merlin Griffiths does in real life
3 years ago
Love Island's Eyal linked to a contestant from last year's show
3 years ago
Nick left Home and Away 15 years ago and OMG, would you just look at him now
Next Page