The final kicks off tonight.

Dan Osborne has shared a fair few seemingly heartfelt pleas ahead of the I'm A Celebrity, Get Me Out Of Here final tonight encouraging the public to vote for his wife, Jacqueline Jossa.

The EastEnders actor, Roman Kemp, and Andy Whyment are the remaining three contestants battling it out for the title of king or queen of the jungle - but unsurprisingly, it's Jacqueline that Dan is putting his money on.

END_OF_DOCUMENT_TOKEN_TO_BE_REPLACED

Sharing a series of posts about how great his wife is and how excited he is to see her again, Dan urged the British public to vote for her in tonight's final.

He also shared a photo of their daughters, Ella and Mia, and said that he couldn't wait until there was "an extra person in bed with us tomorrow night." 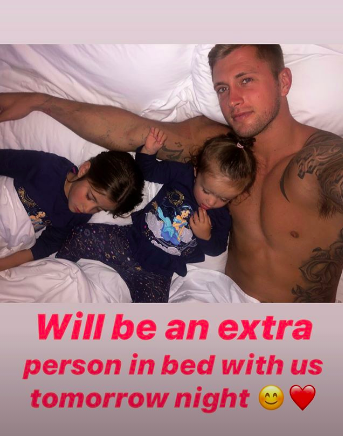 "These little faces tomorrow when they see mummy, it’s going to be beautiful!" he wrote on Instagram today.

"As much as it’s been tough at times, they have been amazing for me in the past month while Jac has been gone, I am so lucky to have you girls and your big brother.

"Thank you my babies for putting a smile on daddy’s face every single day even on the days that smiling just doesn’t seem possible. You are all incredible and my world!! Now let’s go get mummy back!!!!"

This comes after Jacqueline and fellow contestant Myles seemingly had a conversation in the jungle about Dan's alleged cheating.

END_OF_DOCUMENT_TOKEN_TO_BE_REPLACED

He reportedly informed Jacqueline that her husband had had an affair with Gabby, Myles's ex girlfriend.

Jacqueline then apparently threatened to leave the jungle unless she could speak to Dan. She was seemingly permitted to leave him a voicemail instead.

Dan and Jacqueline split for a brief period last year before reconciling ahead of the birth of their second daughter, Mia.

They then split again in March of this year following claims that Dan had cheated on his wife with Love Island's Alexandra Cane.

I'm A Celebrity, Get Me Out Of Here continues tonight at 9pm on Virgin Media One.

Girls With Goals || Her · Ep.161: Feeling Peachy - Sharon Keegan of Peachylean on being an absolute BOSS!
popular
My hair has never been this thick and healthy – and here is what I have been doing differently
The sad reason why viral gymnast, Katelyn Ohashi, isn't on the USA Olympic team
The First Quadrillionaire? Paypal Accidentally Gives Man $92 Quadrillion
All of the Love Island couples that are still together (and those that aren't)
Here's what happens on every day of your menstrual cycle (roughly)
Someone has ranked the penis size of men from all over the world
Why Are Men so Obsessed With Boobs? The Answer is Pretty Surprising...
You may also like
1 month ago
Love Island's Tommy Fury is getting the nod for this year's I'm a Celeb
8 months ago
Ex-housemate has no sympathy for I'm A Celeb's Jordan North - because he let her gerbil die
8 months ago
Vernon Kay appears to be name dropping every celebrity on the planet on I'm A Celeb
8 months ago
'Ghost' spotted on first night of 'I'm A Celeb' at Gwrych Castle
8 months ago
I'm a Celeb's Jess Plummer "secretly" split from boyfriend before show
8 months ago
I'm A Celebrity viewers baffled as they spot an "unnecessary" detail
Next Page