Several actors were spotted in costume on set throughout the past week.

According to reports, filming for season two of Bridgerton has commenced after actress Phoebe Dynevor was spotted in costume on set in London.

Dynevor, who plays Daphne Bridgerton, was snapped on the steps of the Bridgerton house yesterday. She was also seen getting into a carriage on set.

END_OF_DOCUMENT_TOKEN_TO_BE_REPLACED

Earlier this week, other members of cast were seen in costume at Greenwich Old Naval College. They included Melissa Advani and Priya Kansara, who will be joining the Bridgerton cast for season two.

Advani is set to play Lady Eaton while Kansara will take on the role of Miss Eaton.

The newcomers were joined on set by some familiar faces as well. Jessica Masden, who plays Cressia Cowper, one of Daphne's rivals was also spotted in costume.

While we don't know exactly when the new season of the series will air, fans can rest assured that there is plenty more Bridgerton on the horizon.

In April, Netflix announced that the show had been renewed for a third and fourth season. On top of that, a spin-off is currently in the works. 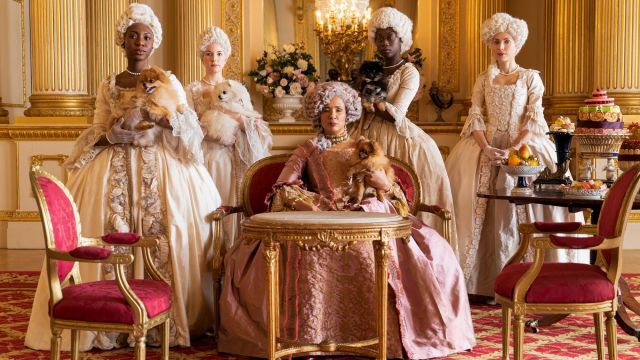 END_OF_DOCUMENT_TOKEN_TO_BE_REPLACED

The all-new series will focus on the origins of Queen Charlotte, who captivated audiences during the show's first season.

The upcoming season of Bridgerton, meanwhile, will focus on Daphne's brother - Lord Anthony (Jonathan Bailey) - and his quest for love.

END_OF_DOCUMENT_TOKEN_TO_BE_REPLACED

Viewers can also expect to met a whole new cast of characters. Among them is Theo Sharpe, who will be played by Irish actor Calam Lynch.

Earlier this year, fans were distraught to learn that leading man Regé-Jean Page would not be returning for season two.

popular
Little boy dies of cancer after doctors ignored mother's warnings six times
Baby dies next to mother who drank 'two or three' bottles of wine then fell asleep
Love Island's Zara's brother reveals the real beef going on between her and Olivia
Molly Mae: "Thank you for entering this world safely for us"
Funeral of Cork toddler takes place after choking accident
Abigail Breslin marries longtime love Ira Kunyansky
Lauren Goodger shares that she's "healthy again" amid her grief
You may also like
2 weeks ago
WATCH: The trailer for Pamela Anderson's Netflix documentary is here
4 weeks ago
All of the new Netflix movies and shows arriving in January
1 month ago
Netflix fans left on the verge of 'throwing up' and issue warning about 'upsetting' dog movie
1 month ago
Netflix teases UK version of Selling Sunset to begin next year
1 month ago
Check out the first look at Netflix's Pamela Anderson documentary
1 month ago
Royal family sources claim they were not contacted by Netflix about Harry & Meghan
Next Page