You may have seen during the Oscars that ten lucky Celeb-spotter tour bus members were brought out on stage by host Jimmy Kimmel and introduced to a whole host of stars.

What you didn't know was two of those brought out were Carlow father and daughter, Tom and Lisa. 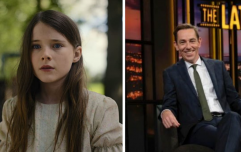 END_OF_DOCUMENT_TOKEN_TO_BE_REPLACED

Aer-Lingus cabin crew member Lisa, was on a three-day stop-over in LA, along with her father when they were very luckily selected to be brought out on stage.

The pair got to briefly meet with a host of stars including Ryan Gosling and Denzel Washington.

Tom loved the experience altogether but hadn't the slightest clue who Jennifer Aniston was when he was faced with her.

2FM’s Stephen Byrne was in LA covering the Oscars and met the pair on his flight home. Stephen got the low down on what happened to them and the pair also appeared on the Eoghan McDermott Show on RTÉ 2FM to discuss their unforgettable night.

popular
Baby found unattended in pram in Dublin, Gardaí reveal
Joanna Cooper heartbroken after her mum is diagnosed with dementia
Love Island first look: The Hideaway is open tonight as Ron has something to tell Lana
Toddler tragically dies in Wicklow following choking accident
No plans to abolish homework, says Minister Foley
Gwen Stefani reportedly pregnant with baby number four
Conor Mcgregor hit by car ‘at full speed’ while cycling
You may also like
3 days ago
Paul Mescal's reaction to his Oscar nomination is everything
3 days ago
Record Oscar nominations for Irish talent this year
3 months ago
Activist who rejected Oscar on behalf of Godfather star Marlon Brando dies aged 75
5 months ago
WATCH: Will Smith finally addresses the infamous Chris Rock Oscars slap
9 months ago
Liam Payne finally explains weird accent during hilarious Oscars interview
9 months ago
Will Smith's Oscar ban: Who else has been banned from the Academy Awards?
Next Page