An Irish makeup artist transformed herself into Conor McGregor

Irish makeup artist, Adrienne Kennedy Campion underwent the greatest challenge ever by transforming herself into the MMA star, Conor McGregor. 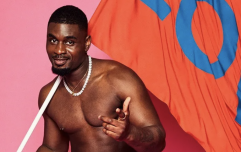 END_OF_DOCUMENT_TOKEN_TO_BE_REPLACED

Speaking to the Independent.ie Adrienne said: "I am not usually an advocate to violence and violent sports, but something has drawn me to Conor McGregor."

The makeover process involved blending, shading, shadowing and plenty of wool which can be seen in her overview video on Facebook.

She did such an incredible job and even included his iconic chest tattoo and nailed his smug pout. Impressive.

popular
Bobi the farm dog is the oldest living pooch ever aged 30
Police believe they know what happened to missing dog walker Nicola Bulley
Siobhan O'Hagan reveals she's expecting her first child
Louise Thompson required surgery after haemorrhaging at home
Love Island's Anna-May admits she thinks one of the girls is playing a game
Here's why Nicola Peltz-Beckham's family are suing her wedding planners
Natalie Imbruglia's Torn is actually a cover and the original just isn't the same
You may also like
1 month ago
Irish tourist dies after falling from moving train in Thailand
5 months ago
Irish person dies after drowning in Spanish resort swimming pool
8 months ago
Louise O'Neill: "It sometimes feels like we need to share our stories to be accepted as humans"
8 months ago
Tributes paid to Irishman found dead in LA after missing for weeks
10 months ago
7 of the best Irish prints you can buy on greeting cards now
11 months ago
Viewers left in shock after video of American woman making a cup of tea
Next Page