Louis Theroux is one of our favourite investigative presenters and we will, without fail, watch all of his documentaries.

They're extremely fascinating and dive deep into worlds that not many of us know much about.

However, one thing we definitely do know about is sexual assault and consent. The BBC Two documentary will go into American universities and will be called The Night in Question.

Louis will speak to those who have been sexually assaulted and how they strongly believe that guidelines, classes, and more information on the topic of consent is needed on campuses in the US.

The documentary will also follow alleged perpetrators who feel that their reputations have been tarnished by the sexual assault claims. 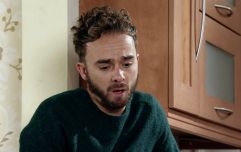 END_OF_DOCUMENT_TOKEN_TO_BE_REPLACED

University officials and other relevant authorities will also feature and speak about their experiences with sexual assault on college campuses.

The Night in Question does not have an official air date yet, however if it's anything like Louis Theroux's other documentaries, it's definitely worth the watch.

Louis' most recent documentary was called Altered States and episodes included titles such as Take My Baby, Love Without Limits and Cheating Death.

popular
5 new additions to Netflix to spend your weekend watching
Irish teacher Lucy Lanigan-O'Keeffe is engaged Prince William's best friend, Thomas van Straubenzee
Love, Guaranteed is the romantic comedy we never knew we needed
Someone has ranked the penis size of men from all over the world
Staycation: 5 incredible Airbnbs in Ireland to check out for the perfect getaway
Here's what happens on every day of your menstrual cycle (roughly)
Here's the average age people lose their virginity around the world
You may also like
6 months ago
General Election 2020: Where the parties stand on Domestic Violence and Sexual Assault
10 months ago
Holly Hagan reveals that she was sexually assaulted during her Geordie Shore days
1 year ago
'An upward trend': Sexual assault cases up by 30 per cent in a year, says FSI
1 year ago
The Louis Theroux documentary on sexual assault will air tonight
1 year ago
R. Kelly has been officially charged with aggravated sexual abuse
1 year ago
Upskirting to carry two year jail sentence in England and Wales under new law
Next Page