Have you seen her?

Love Island fans think they have sussed out a secret the show isn't telling them, that new girl Jazmine has left the villa.

Jazmine joined the show as one of the six bombshells as the girls left for Casa Amor, but she hasn't really been seen on screen since.

END_OF_DOCUMENT_TOKEN_TO_BE_REPLACED

One person wrote: "Jazmine walked through the door and was never to be seen again."

Is jazmine even in the villa? Not even a minute of screen time since the start of Casa! #LoveIsland pic.twitter.com/9ggMuYcHiM

END_OF_DOCUMENT_TOKEN_TO_BE_REPLACED

A third said: "Has Jazmine been locked in the bathroom these past few days? Where HAS she been?"

While a fourth said: "In all seriousness.. where is this girl in the Villa? Where is Jazmine?" 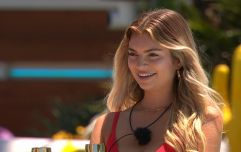 END_OF_DOCUMENT_TOKEN_TO_BE_REPLACED

Ahead of entering the villa, Jazmine said to prepare for the drama she was set to bring to Love Island.

The nightclub manager said: "A lot of drama but a lot of humour as well. I’m a very funny girl.”

“I get called Donkey from Shrek, that’s my nickname, as that’s my humour. Always coming out with my little oneliners.”

The 21 year old had her sight set for Jacques, who now seems to have his head turned but she also said she fancied Jay and Davide.

popular
Molly-Mae Hague fans think they officially know her baby's name – and it means cloud
Baby found unattended in pram in Dublin, Gardaí reveal
"I feel like I lost myself": Nathalie Lennon on her mental health struggles and her latest project with Pieta
Joanna Cooper heartbroken after her mum is diagnosed with dementia
Tasha Ghouri hits back at another islander who called her relationship fake
Gwen Stefani reportedly pregnant with baby number four
Conor Mcgregor hit by car ‘at full speed’ while cycling
You may also like
13 hours ago
Love Island's Haris could be questioned by police after street fight video
1 day ago
Adam Collard opens up on dating life since Paige Thorne split
1 day ago
Love Island's Haris responds to street fight video following dumping
1 day ago
Montana Brown hints at when her baby's due date is
2 days ago
Another bombshell might be entering the villa tonight
2 days ago
Love Island first look: Two islanders are dumped as Aaron has eyes for Zara
Next Page