Love Island's Hannah Elizabeth has given birth to her first child

She finished runner up on the first season of the show.

Love Island's Hannah Elizabeth has given birth to her first child.

The former reality star welcomed a baby boy via C-section this week.

She took to Instagram in the early hours of this morning to confirm the news, saying: "Today is the best day of my life."

Hannah announced that she was expecting her first child with partner and YouTuber George Andreeti earlier this year.

She confirmed just six days ago that she had decided to split from Andreeti because he is "not well."

“I left George when I found out I was pregnant, I had to do what is right for me and my baby," she told Mail Online. 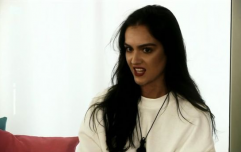 END_OF_DOCUMENT_TOKEN_TO_BE_REPLACED

“He isn’t well at the minute and I don’t agree with what he is posting online. I'm going into this as a single mum, on my own with no support.

“I want my baby to have the best and healthiest upbringing and I am not going to let anyone come between that.”

Lets do this 💙✨. Thank you all for the amazing msgs so lucky 🙏✨ @taliawhitephotography

Andreeti added: "I will always have her back whenever she needs it hopefully she can reach out to me and let me be there for my son as a father should."

29-year-old Hannah starred in the first series of Love Island back in 2015.

She reached the final and was eventually named runner up alongside then-boyfriend Jon Clarke.

Jon shocked the nation back in the day by asking Hannah to marry him on the show, but the pair eventually split a few months later.

She later became engaged to Andreeti, before their relationship ended.


popular
Apparently, this is the unique name Conor McGregor and Dee Devlin gave their second child
Say hello to the €40 M&S dress that will instantly brighten your spring wardrobe
Tony McGregor speaks out about finally marrying Conor and Dee
The €30 New Look skirt we're going to be living in for the next few weeks
Groom calls his fiancée a 'toddler throwing a tantrum over a sparkly toy' for not wanting to buy a €90 wedding dress
We are absolutely obsessed with this grey teddy coat, and it's just €29 in the Zara sale
Meghan and Prince Harry issue statement after agreement to leave the royal family is confirmed
You may also like
18 hours ago
It looks like winter Love Island may soon be getting their first Irish contestant
1 day ago
Love Island's Amy Hart says she will freeze her eggs over early menopause fears
1 day ago
The Love Island Villa is under quarantine due to an outbreak of a vomiting bug
2 days ago
Love Island: Nas's reaction to Siannise going on a date was nothing short of incredible
2 days ago
Ex-Islander Sherif Lanre apparently thinks Ollie's exit has been 'made up'
2 days ago
Love Island's Sophie goes on a date with newbie Connagh tonight so let the drama commence
Next Page