END_OF_DOCUMENT_TOKEN_TO_BE_REPLACED

A sordid story of Stockholm Syndrome and erotica that is often as far away from consensual as you could get, the film relied on a narrative filled with graphic sex and power imbalances to trundle through its plot, the end of which may have left audiences wanting more... but predominantly because the ending was just that bad.

Following its initial release, a petition was launched to ban 365 Days from Netflix due to its undertones of sexual assault and violence, with singer Duffy (who had recently told of her own kidnapping ordeal), writing an open letter to Netflix stating that the film "glamorises rape."

Still though, that apparently wasn't enough to stop 365 Days from entering the streaming services's daily Top 20 in over 90 countries - and for Netflix to announce two more sequels.

According to Deadline, the upcoming sequels (two of them!) see Laura and Massimo reunited, "but their new beginning is complicated by Massimo’s family ties and a mysterious man who enters Laura’s life to win her heart and trust at any cost."

The films will be based on the book trilogy by Polish author Blanka Lipinska, who co-wrote the first script with Mojca Tirs. However, it is looking likely that much of the controversial content will be changed or "softened" for the upcoming projects.

“365 Days was one of our most popular films for our members in 2020,” Netflix’s Łukasz Kluskiewicz, Content Acquisition Manager of films for CEE and Poland, told the publication. 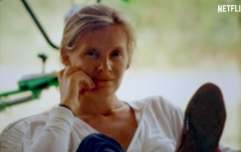 END_OF_DOCUMENT_TOKEN_TO_BE_REPLACED

“We’re working closely with Blanka Lipinska, the author of the 365 Days trilogy of books and writer of the film, to continue Laura and Massimo’s story on screen. Their journey together is full of many twists and turns as our characters continue to grow and learn more about themselves."

“I’m hugely honoured that the remaining two parts of my 365 Days trilogy – This Day and Next 365 Days – will be brought to life on screen by Netflix,” added author Blanka Lipińska. “I’m so excited to show fans of my novels all over the world this fresh look at the characters and to continue Laura and Massimo’s story.”

Girls With Goals || Her · Ep.161: Feeling Peachy - Sharon Keegan of Peachylean on being an absolute BOSS!
popular
Couple who can't agree on child’s name decide to each call her different things
Four day working week pilot scheme launched in Ireland today
Love Island featuring show's first contestant with a disability
This wedding hangover kit is going viral on TikTok
Irish woman tragically drowns in the south of France
The DIY frozen coffee recipe that's so delicious you'll never pay for an iced latte again
"I was holding out for more the entire time": Why do so many of us go back to our exes?
You may also like
1 week ago
WATCH: The trailer for Atypical's final season is here
1 week ago
Revealed: Meet the contestants in this year's Too Hot To Handle
1 week ago
Irish Too Hot To Handle star just got a huge record deal
1 week ago
Irish actress Amybeth McNulty cast in Stranger Things season 4
2 weeks ago
Opinion: The Bold Type is so bad it's good - here's why we can't get enough
2 weeks ago
Sophie Turner joins Colin Firth in HBO's true crime series The Staircase
Next Page