Including a new Stephen King film. Heaven for horror fans.

It's fitting that Netflix marked Friday the 13th by releasing some terrifying details about their upcoming films and if you're already excited about the Halloween period, you'll be very happy to hear that the online streaming giant will be adding plenty of new and original titles.

In terms of the main draws, we're very interested to see what the latest Stephen King adaptation, In The Tall Grass, has in store while Eli, Fractured, and Rattlesnake all sound interesting too.

Fans of serial killer dramas will definitely want to check out In The Shadow Of The Moon.

Here's what's on the agenda along with some plot details;

In The Tall Grass

Plot: When siblings Becky and Cal hear the cries of a young boy lost within a field of tall grass, they venture in to rescue him, only to become ensnared themselves by a sinister force that quickly disorients and separates them.

Cut off from the world and unable to escape the field’s tightening grip, they soon discover that the only thing worse than getting lost is being found. Based on the novella by Stephen King and Joe Hill.

Need something to watch tonight? These four Irish movies are all on Netflix

END_OF_DOCUMENT_TOKEN_TO_BE_REPLACED

The trip takes a turn for the worse when Peri is hurt in an accident and the family rushes to a nearby emergency room run by a staff with dubious intentions. After being sent away for further testing Peri and Joanne vanish and all records of their visit disappear. Ray’s concern turns into a desperate race to find his family and discover the truth of what happened to them.

Plot: Eli is the story of a young boy (Charlie Shotwell) plagued with an unknown, debilitating illness that requires him to live completely sealed off from the outside world.

After exhausting every option, his parents (Kelly Reilly and Max Martini) put their trust – and his life – in the hands of a doctor (Lili Taylor) whose experimental, cutting edge treatments at her clean house facility may hold Eli’s last hope. As Eli undergoes the tremendously intense process that could potentially cure him, he begins to be haunted by experiences that make him question who he can trust and what is lurking inside the house. 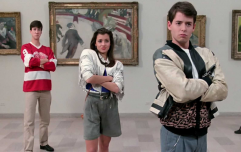 END_OF_DOCUMENT_TOKEN_TO_BE_REPLACED

Plot: Katrina (Carmen Ejogo) is a single mother driving cross country to start a new life with her young daughter Clara (Apollina Pratt) when their car breaks down in the middle of nowhere. As Katrina changes the tire, Clara wanders off the desert road and is bitten by a venomous rattlesnake.

Desperate to save her daughter’s life, Katrina accepts the help of a mysterious woman, but after she miraculously heals Clara, Katrina is asked to repay the good deed by killing a stranger in exchange for the life saved.

In The Shadow of the Moon

Plot: In 1988, Philadelphia police officer Thomas Lockhart (Boyd Holbrook), hungry to become a detective, begins tracking a serial killer who mysteriously resurfaces every nine years. But when the killer's crimes begin to defy all scientific explanation, Locke's obsession with finding the truth threatens to destroy his career, his family, and possibly his sanity.

Here's a look at some of the titles.


popular
'That’s the most honest answer': Skeet Ulrich reveals why he is leaving Riverdale
Someone has ranked the penis size of men from all over the world
Debby Ryan got married and her dress was absolutely stunning
QUIZ: How well do you remember Angus, Thongs and Perfect Snogging (the movie)
After days of silence, Scott and Sofia finally comment on the break up rumours
Selena Gomez Speaks Out About Those Cara Delevingne Dating Rumours
So, William and Harry have a step sister... and who knew?
You may also like
4 weeks ago
QUIZ: Can you guess the Disney movie from its opening line?
1 month ago
Just got Disney Plus? Here are five classic feelgood movies to stream this weekend
1 month ago
J.K. Rowling has launched a brand-new online Harry Potter universe
1 month ago
Here are the 7 best movies on TV this Saturday
1 month ago
Netflix's Love, Wedding, Repeat is the romantic comedy we never knew we needed
1 month ago
Just My Luck is on TV this morning and that's our Saturday sorted
Next Page