When it was first announced that Mary Berry, Sue Perkins, and Mel Giedroyc weren't going to be returning to Bake Off once the show made the leap to Channel 4, people were worried.

They worried that the show wouldn't be the same. 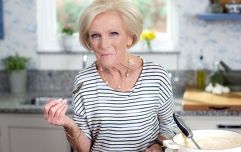 So, Mary Berry was arrested 25 years ago and the story is hilarious

END_OF_DOCUMENT_TOKEN_TO_BE_REPLACED

They worried that the spark original Bake Off had would be lost.

They worried that Noel Fielding would be too strange to present a programme about baking.

Thankfully, all of these worries were not warranted because this year's Bake Off was as lovely and entertaining and delicious and dramatic as always.

One thing, however, that did remain the same about GBBO was Paul Hollywood.

The only judge or presenter to make the switch, Hollywood again graced our tellies this year with his steely blue stare and abundance of handshakes.

As it turns out though, Paul wasn't all that impressed when Mary Berry and the others quit the show.

And he's still not that impressed now.

“I stayed with Bake Off. The girls abandoned it. But I was the one put under siege.

“I became the most hated man in the country! It’s not fun for someone that doesn’t like being in the limelight."

Paul also went on to say that he just wanted to be a chef and that he never asked for the fame that came with Bake Off.

He also stated that if he got a cheque, he'd never be seen again.

When asked how big the cheque would have to be, Paul said: "Not much, to be honest."

Yesterday, the pair stated that they were splitting after 19 years of marriage.

"It is with sadness that we have decided to separate.

"Our focus continues to be the happiness of our son, and we would ask the press and public to allow us privacy as a family during this very difficult time."

The couple previously split up for a time in 2013 after Paul had an affair.

popular
A celebrity hairstylist just shared a genius hack for the perfect messy bun
What we can expect from Emily in Paris seasons 3 and 4
Penneys has a new homeware collection – and it looks so high-end
Here are all the Instagram accounts of the stars of Netflix's Cheer
5k walk in aid of Women's Aid to take place in honour of Ashling Murphy
Ashling Murphy will be laid to rest in Tullamore on Tuesday
"Traumatised" 10-year-old girl escapes from car as man steals it
You may also like
2 years ago
Kate Middleton shares Prince Louis' first word, inspired by the fabulous Mary Berry
4 years ago
Mary Berry opens up on the loss of her son in heartbreaking video
4 years ago
Mary Berry is coming back as a judge for a new cooking show
4 years ago
Mary Berry's latest dish has caused controversy online
4 years ago
Mary Berry's secret spaghetti ingredient might just blow your mind
4 years ago
Mary Berry reveals the thing that drove her mad about the Bake Off
Next Page