REVIEW - Twenty Feet From Stardom, Most Certainly Worthy Of That Oscar

8 Shares
Sue Murphy
They are so often the forgotten heroes of the masterpiece, yet they are the voices that we identify with and sing along to. Their names are often unknown, but we can recognise their harmonies from tracks almost immediately. It's hard to believe how overlooked backup singers can actually be, yet on a daily basis we still manage to talk about the Rolling Stones Gimme Shelter when really we should be talking about Merry Clayton's amazing guest vocal on Gimme Shelter.
Advertisement
Thankfully, Morgan Neville, the man behind Johnny Cash and The Cool School decided that it was their time to take that walk from the background to front of stage for their moment in the sun. Twenty Feet is one of those documentaries that has gained critical acclaim but essentially gains ground from word of mouth; this particular piece is beloved by many the music lover and it's easy to see why.
Following the careers of the most prominent backup singers who are well known in the music world for their work, Twenty Feet perfectly interweaves stories that began way back in the 1940's right up to the present day. Our main storytellers have literally worked with the who's who of the music world, Sting, Bruce Springsteen, Michael Jackson and the Rolling Stones, yet most of their names will not be known to many an audience member who will attend the film. 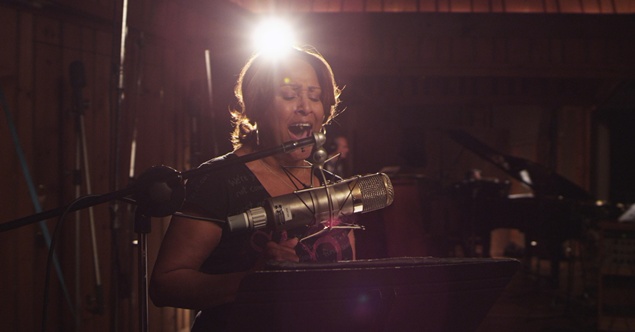 Merry Clayton takes us on her journey, beginning with the Raelettes, right through to her attempts to forge her own career under her own name. Darlene Love who worked for The Crystals (literally, she was the lead vocal but never credited), Judith Hill who was the backup singer for Michael Jackson and the brilliant Lisa Fischer who has worked from everyone from the Stones to Eric Clapton. Not only does the documentary take us through these amazing careers, it talks to some of the singers who have made sure these women have their time in the spotlight, Sting, Bruce Springsteen and the inimitable Mick Jagger.
Advertisement
Despite the fact that most may think backup singers are just that because they cannot make it to the microphone, some prefer working at the back of the stage, blending their harmonies with the voices of others, contributing to the all round feel of the band on stage rather than taking their own personal glory. However, there are some whose dream it was to take centre stage and their heartbreaking reality colours this piece absolutely beautifully. Gone is the non-recognition, this is their moment.
This is a film essentially for music fans who will die for some of the most accelerating and beautiful harmonies to make it to the small screen but it is so much more than that. This is a film for anyone and everyone who has not been recognised for an achievement in their lives but quietly sat by and waited their turn, only to be ignored. It is a celebration of music, as even those who continue to remain in the shadows on stage soldier on for their love of their art.
Advertisement
This is simply a must see.

popular
Late Late Show viewers are not happy with Ryan's questions for Billy Connolly
10 items from Zara for the perfect autumn capsule wardrobe
WATCH: Parents see person walk past daughter's crib in creepy baby monitor footage
Former detective chief says Brian Laundrie discovery is "strange"
It's Happening! '23 Jump Street' Announced
Paris Hilton says she was "slapped" and "strangled" as a teen in youth care
This is how much 91-year-old Queen Elizabeth drinks every day
You may also like
1 month ago
One of the best comedies of the last 20 years is coming to Netflix
1 month ago
"It is really amazing:" The Little Mermaid star gives update on live-action remake
1 month ago
Netflix reveals release dates for all of the huge movies still to come in 2021
2 months ago
The full list of all the new shows and movies coming to Netflix in August
3 months ago
QUIZ: Can you guess the movie from its pixelated poster?
4 months ago
Steven Spielberg just signed a massive deal with Netflix
Next Page