Last night, the third last ever episode of Game of Thrones aired in the States.

In case you, like many of us over here in the UK and Ireland, have yet to see it, we won't spoil any pivotal moments for you. That would be very unfair and also we haven't watched it so how could we?

One thing we will spoil, however, is the illusion of Westeros. Or rather, the show has done that itself by accidentally leaving a genuine Starbucks cup in the shot during a pivotal scene.

The blunder appeared towards the beginning of last night's episode as most of the cast were enjoying a bit of a celebration following a successful Battle of Winterfell.

Daenerys, struggling to get involved in the festivities due to the loss of her good friend Ser Jorah (and the realisation that she may not sit on the Iron Throne after all), sat silently at the end of the table drinking it all in.

Or rather, drinking a Venti macchiato as per the Starbucks cup sat right in front of her. 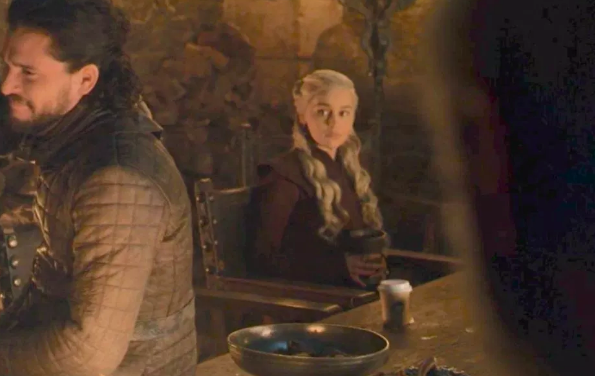 Game of Thrones fan, of course, noticed the entirely out of place beverage and took it upon themselves to mention it many times online.

Sure what else would you be doing with your Monday?

They legit forgot a Starbucks cup on set 😂😂😂 pic.twitter.com/LWDpAKaf55

There's literally a Starbucks cup on the table. Like wtf? You took 2 years to film 6 episodes. #GameofThrones pic.twitter.com/3pK42AoaPk

Game of Thrones fans have only got another two episodes (three if you haven't seen episode four yet) to go until the show finishes forever.

Emilia Clarke said last week that upcoming episode five (next week's episode) is going to be even more shocking and intense than the Battle of Winterfell.

We honestly can't imagine how but yeah alright, fair.


popular
Olly Murs has shared an incredibly emotional tribute to his dear friend Caroline Flack
Penneys is currently selling €11 loafers that look JUST like the famous Gucci ones
Holly Willoughby just wore the cutest €40 dress from Marks and Spencer
Say hello to the €45 face oil that Kate Middleton absolutely SWEARS by
Hallelujah! The 3 quickest ways to get rid of belly bloat
Say hello to the €46 Bershka dress that everyone needs in their spring wardrobe
Tonight's episode of Love Island will not be aired following the death of Caroline Flack
You may also like
3 weeks ago
Did you spot the Game of Thrones actor that was in Sex Education season 2?
4 weeks ago
Game of Thrones prequel House of the Dragon looks set to arrive in 2022
2 months ago
Game of Thrones' Emilia Clarke was 'in hell' while filming Daenerys' final big speech
2 months ago
Game of Thrones fans raging as official Twitter page shares cryptic message
2 months ago
Game of Thrones' Kristofer Hivju says there's an alternate ending to the series
2 months ago
Emilia Clarke says she was told she'd 'disappoint' GOT fans if she didn't do nude scenes
Next Page