If you're on TikTok, you might have noticed the upsurge in all-male podcasts who love to spout 'hot takes' about women.

They're misogynistic, annoying, and totally miss the mark.

END_OF_DOCUMENT_TOKEN_TO_BE_REPLACED

If you don't know, these podcasts generally promote the idea that men are dominant, women are inferior, and the hosts tend to pass derogatory remarks about women's appearances and actions.

Recently, Jack Denmo, host of Good Bro Bad Bro podcast went viral for asking viewers if girls had hobbies and saying he did not know any women who "actually have hobbies".

Other episodes of his show see him discussing the importance of a woman staying in shape, complaining about women who can't cook, and ranting about how only men have to put effort into dating while women just have to exist. 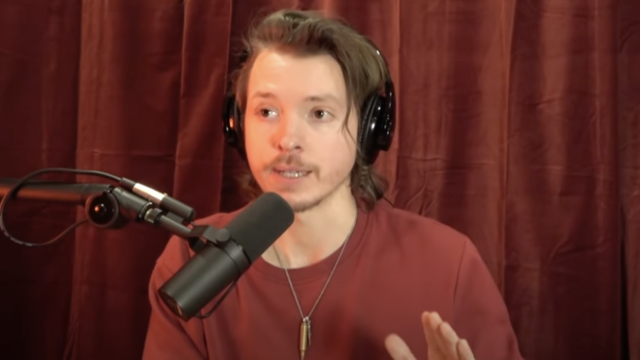 END_OF_DOCUMENT_TOKEN_TO_BE_REPLACED

Before that, a podcast called NoFilterPod, hosted by brothers Anthony Casasanta, Nick Casasanta and friend Jason Girratano came under fire when a host said he would leave his wife if she "let herself go" after childbirth.

And they just keep coming.

Several more men have carved out a very misogynistic niche for themselves with similar podcasts and are being referred to by TikTokers as “alpha male podcast hosts". For the most part, they just attract backlash and only receive a small numbers of listeners from the alpha male subculture. But it's still scary to think that men like this even exist in 2022.

The collective frustration many people feel when stumbling across these videos has manifested itself into a hilarious viral trend, which parodies these types of men by mirroring their behaviour to show how ridiculous they sound.

The funniest (or scariest) part of it all is that those doing the parodying did not even have to stray far from the actual words of the podcast hosts.

@lizbelortiz I couldn’t stay away from the podcast talk this exactly how they be sounding to us ? #podcastclips #fyp #freshandfit #podcastclips #misogynistic #fy ♬ original sound - LizbelOrtiz

Many other have responded to the videos by wondering what is going on with the recent rise in podcasts with hosts like this.

"Hey, to the factory somewhere that's producing in mass these copy/paste misogynistic podcast host robots - can you slow the f*ck down please?" one TikTok user said.

So why the hell are there so many men just dying to shamelessly share their sexist views publicly lately?

Elsa Lakew, the user behind the satirical trend, thinks these are men who are simply clinging on to the patriarchy.

"We are seeing this shift in terms of our social and economic standing," she told Insider.

"And men are trying to use all of this very bravado-esque, alpha-male podcasting as a way to instill fear in women and try to keep them at the same status that they've always been.

"I feel like most of the credit really does go to the other girls who have duetted this and really made this what it is. My TikTok was funny, but theirs are just absolute gold."

popular
Bride asks for divorce day after wedding following groom's disrespectful cake stunt
Gwen Stefani reportedly pregnant with baby number four
Police believe they know what happened to missing dog walker Nicola Bulley
Natalie Imbruglia's Torn is actually a cover and the original just isn't the same
Couple decide to live on cruise ship permanently after finding it's cheaper than paying mortgage
These are the most popular names for babies born in February
If you constantly have a cold nose, this could be the reason why
You may also like
4 months ago
"Home alone" – Prince Louis memes are taking over the internet
5 months ago
Andrew Tate has – finally – been banned from Facebook and Instagram
6 months ago
Sonya Lennon reveals ‘judgement’ her daughter, 17, experienced when buying pregnancy test
7 months ago
Here's how to make Hailey Bieber's TikTok famous Strawberry Glaze Skin Smoothie
7 months ago
Mass in Mayo church goes viral after spooky incident happens over livestream
7 months ago
People on TikTok are making 'healthy Coke' with just two ingredients
Next Page