Coke is getting a makeover.

And a rather fancy one at that.

If you have a mate that's a little bit fussy about what they drink (you know the ones, they only want elder flower tonic in their G&T, and god FORBID it's not in a bowl glass), then this new Coke is definitely for them.

The global drinks company has created four new crafted Coca-Cola Signature Mixers, which have been specifically designed to be paired with premium dark spirits.

Ana Amura, Senior Brand Manager at Coca-Cola said: "Coca-Cola has always had a synergy with dark spirits and classic cocktails, from the inception of the iconic Cuba Libre in the late 1900s to the popular Whiskey & Coke in the early 20th century.

"With the rise of mixed drinks, we're excited to announce the launch of Coca-Cola Signature Mixers, a specific range uniquely created to mix with dark spirits. 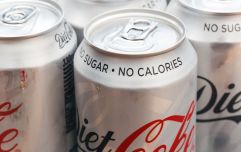 END_OF_DOCUMENT_TOKEN_TO_BE_REPLACED

"Working with an inspirational group of global mixologists to create amazing flavour combinations, we hope Coca-Cola Signature Mixers open up the world of mixology to an even wider audience."

After mixologists were brought on board, taste tests were carried out to members of the public and four were chose: Smoky, Spicy, Herbal and Worthy.

Do you think you'll try them?

popular
Irish influencer Lisa Jordan reveals her little boy's name and it's so cute
The 2021 Ikea catalogue has been revealed – and it is filled with ideas and inspiration
WATCH: Former 'Charmed' actress shows off shocking hair loss due to COVID-19
It turns out we may have been brushing our hair wrong the whole time
83,000 people uninstalled Covid Tracker App following battery issue
Bacteria watch: 7 dirty things to clean in your home immediately
90-year-old grandfather comes out as gay in viral post and inspires millions!
You may also like
8 months ago
The Coca-Cola truck will visit Dublin, Mayo, Galway, Cork, Waterford, and Belfast very soon
1 year ago
Oh, please NO! The price of a can of Diet Coke is set to RISE
1 year ago
Pubs across Ireland will offer free soft drinks to designated drivers in latest Coca-Cola campaign
1 year ago
YES! We officially have ALL the dates of the Irish Coca-Cola Christmas truck tour
1 year ago
People are seeing the Coca-Cola Christmas ad for the first time and they're going MAD
1 year ago
6 makeup trends that have officially made a MAJOR return
Next Page