The findings suggest that black tea, even at higher levels of intake, can be part of a healthy diet.

Irish people are well-known for their love of a nice cupán tae.

Thankfully, new research has found that such pleasures may have health benefits.

END_OF_DOCUMENT_TOKEN_TO_BE_REPLACED

A study of nearly half a million tea drinkers in the UK showed that higher intake of the beverage was associated with a "modestly lowered risk of death".

Led by researchers at the National Cancer Institute, part of the National Institutes of Health in the United States, the study analysed the potential mortality benefits of drinking black tea.

Black tea is the most common type of tea consumed in Ireland and the UK. 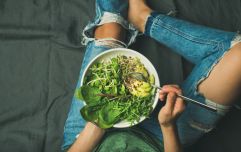 END_OF_DOCUMENT_TOKEN_TO_BE_REPLACED

The analysis involved 498,043 men and women between the ages of 40 and 69 who participated in a large cohort study and were followed up with for about 11 years.

Researchers found that people who consumed two or more cups of tea per day had a 9% to 13% lower risk of death from any cause than people who did not drink tea.

"Higher tea consumption was also associated with a lower risk of death from cardiovascular disease, ischemic heart disease, and stroke," the National Institutes of Health said in a statement.

END_OF_DOCUMENT_TOKEN_TO_BE_REPLACED

It added that this was seen regardless of preferred tea temperature, the addition of milk or sugar and genetic variations affecting the rate at which people metabolise caffeine.

The findings were published on Tuesday (30 August) in the Annals of Internal Medicine and can be found here.

popular
Two Love Island 2022 stars have just become step siblings...
Gwen Stefani reportedly pregnant with baby number four
Female child rushed to hospital after violent incident in Co. Clare
Young girl found injured in Co. Clare house is in critical condition
Abducted in Plain Sight: True crime drama follows girl who was kidnapped twice by the same man
Molly Mae Hague shares emotional moment she discovered she was pregnant
Joe Swash has reportedly flown to South Africa to film I'm A Celeb All Stars
You may also like
3 days ago
Sick of being sick? 5 easy ways to boost your immune system
1 week ago
5 small things you can do to feel calmer and more in control every day
1 week ago
Skin positivity: Dealing with so-called 'bad' skin - inside and out
2 weeks ago
Free contraception for women aged 17-25 comes into effect tomorrow
2 weeks ago
Government urged to raise minimum age of sale of tobacco products to 21
2 weeks ago
5 easy Sunday rituals I swear are making my life easier all through the week
Next Page