"My body never stopped me. The attitudes did."

Today is World Obesity Day and people are taking to social media in an effort to change the narrative around obesity across society. Weight stigma, also known as weight bias or weight-based discrimination, is an issue that many people face on a daily basis, it refers to discrimination or stereotyping based on a person's weight or size.

Fear of this stigma can lead to an avoidance of seeking medical care, disordered eating, depression and in extreme cases weight stigma has been directly associated with suicidal ideations and acts. 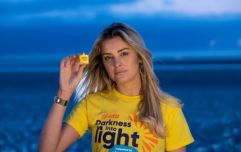 "It gives people the opportunity to feel that solidarity": Louise Cooney on the power of Darkness Into Light

END_OF_DOCUMENT_TOKEN_TO_BE_REPLACED

Broadcaster and beauty columnist, Louise McSharry, has spoken out today in an effort to highlight the need for change when it comes to other people's attitudes towards weight. In an Instagram post, Louise shared that her weight has never negatively impacted her life, and that it's society that has the issue, "Today is #WorldObesityDay, the day the world gets together and tries to solve the problem of people like me. Except, I'm not a problem."

Louise went on to explain how she was placed on her first diet at the age of six and how it led to years of pointless dieting:

"Their feelings about my body led to years of pointless yoyo dieting which, would you believe, is really bad for your health. Their feelings about my body and what it is and isn't capable of meant I never tried out for the school dance team, even though I wanted to, because I had been taught that bodies like mine didn't belong there. It meant I stopped going on acting auditions because an agent told me I 'better get my body together' as she handed me a script at age sixteen. It meant I settled for substandard relationships with shit people because I had been taught that I'd be lucky if anyone was ever attracted to me. I can dance. I can act. I am attractive. My body never stopped me. The attitudes did."

The drivers of any sort of stigma are usually rooted in deep misunderstanding. It is never acceptable to discriminate against someone based on their size, but shaming, blaming and concern-trolling is something we're seeing more and more of in today's society. If you'd like to educate yourself on obesity and issues surrounding weight, you can find further information here or follow the hashtag #EndWeightStigma on social media.

Girls With Goals || Her · Ep.160: The Beauty Of Coaching - Hayley Harrison joins us from Sport Ireland
popular
Why Prince Harry and William aren't walking together at Prince Philip's funeral
Kate Middleton has addressed the rumours that she's pregnant with her fourth child
TV host makes baffling remark about Meghan Markle's 'reaction' to royal family photo
The Queen has banned Meghan Markle from wearing any of Princess Diana's jewellery
A royal insider has revealed the truth behind Meghan and Kate's rumoured feud
Prince Philip 'advised Prince Harry not to marry Meghan' for a brutal reason
We're living for these cheeky T-shirts from Joanne Hynes at Dunnes Stores
You may also like
3 years ago
Nando's listed as one of the most unhealthy restaurants for children to eat in
1 month ago
5 really simple fitness tips you can do at home
1 month ago
Menopausal women aren't talking about the menopause
1 month ago
Feeling a little down? 3 quick and easy changes to get you out of a slump
1 month ago
Endometriosis and fertility – 6 things all women should know
1 month ago
Hazel Chu: "At what stage did we stop giving a crap about women's issues?"
Next Page