You is a TV show about a serial killer who also happens to be hot.

It's also about the dangers of social media stalking, stalking in general, and lads who appear to be perfect but are actually psychopaths.

Nothing about the show is reflective of how a healthy relationship should be, but part of what made You so successful and so unnerving were the aspects of Joe's character that made him appear so normal.

Sure, haven't we all vaguely stalked a person's social media before going out with them and subsequently murdered their boyfriend and best friend in cold blood?

You definitely have. And 'freeclimbing' isn't all that different.

According to research compiled by Vivastreet, Freeclimbing is the act of going deep (and we mean deep) on a person's social media who you plan to potentially date in the future.

Going deep on the lurk front may seem like a good idea at the time, but realistically you're going to end up coming across a post or a photo that you don't like.

It's in that way that the act can be a tad dodgy or, if you want to get dramatic about it, dangerous. 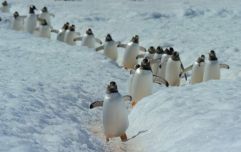 END_OF_DOCUMENT_TOKEN_TO_BE_REPLACED

Talkto explains the origin of the trend's namesake, citing Freeclimbing as:

“The act of searching through a dating prospect’s social media accounts and going backward in their history. This is characteristically dangerous, just as free climbing is, hence the term.”

Vivastreet decided to do a bit of their own research and figure out how many people are potentially being freeclimbed without knowing it.

Turns out, a good few.

They discovered that one in five people don't actually know whether their social media profiles are public.

As well as this, 30 percent of people are likely to do a bit of a stalk before dating someone, so it's absolutely worth knowing what you've got on display.

popular
Aww... Actor Sam Page Shares Wedding Snaps on Instagram
'That’s the most honest answer': Skeet Ulrich reveals why he is leaving Riverdale
Gwen Stefani reportedly pregnant with baby number four
Someone has ranked the penis size of men from all over the world
After days of silence, Scott and Sofia finally comment on the break up rumours
Cristiano Ronaldo has been called 'racist' for his latest Instagram post
Kourtney Kardashian and Scott Disick are officially back together
You may also like
1 day ago
Steve Carrell's Space Force landed on Netflix today, just so you know
6 days ago
Netflix's Sweet Magnolias is the perfect series to bingewatch this weekend
1 week ago
QUIZ: How well do you remember Angus, Thongs and Perfect Snogging (the movie)
1 week ago
The creator of Big Little Lies is teaming up with Netflix for a gripping new thriller
1 week ago
Here is everything that is going to be coming to Netflix in June
1 week ago
ATTENTION: Angus, Thongs, and Perfect Snogging is dropping onto Netflix next month
Next Page