A petition to protect a marriage equality mural in Dublin City Centre has attracted almost 20,000 signatures since it was created this morning.

Dublin City Council has threatened to remove the striking Joe Caslin mural, which depicts two men in an embrace and has become an iconic image of the upcoming same-sex marriage referendum, as it does not have planning permission. 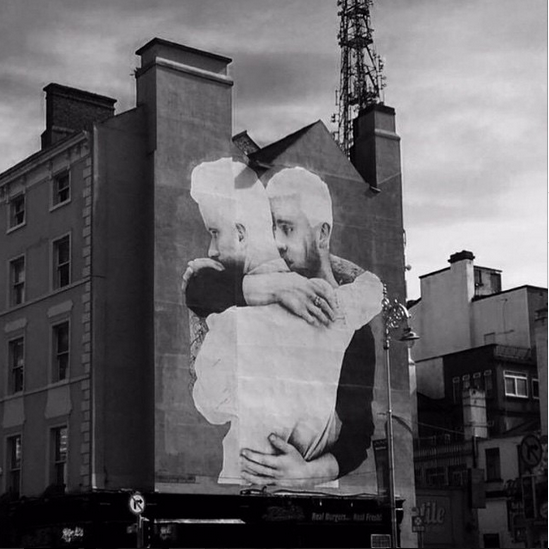 However, there has been mass opposition to these plans by proponents of the 'yes' campaign, with over 19,000 signing an online petition for the retention of the drawing over the last twelve hours.

"The building owners have given consent for the mural to be placed there, there was no building, simply a paper mural being erected on the side of a building, this should not be a planning matter, as many of the buildings in the area also dawn murals," said Jamie, the creator of the petition.

"We are asking that Dublin City Council do NOT buckle to the pressure, and allow the mural to stand high and proud on South Great George's Street, Dublin 2."

popular
QUIZ: How well do you remember 13 Going on 30?
Someone has ranked the penis size of men from all over the world
Kate Middleton has addressed the rumours that she's pregnant with her fourth child
The entire Twilight Saga is coming to Netflix this month, and we're so ready
QUIZ: How well do you remember The Lizzie McGuire Movie?
Gwen Stefani reportedly pregnant with baby number four
Here's how long sperm actually lasts for after sex
You may also like
3 days ago
Bewley's is set to open its doors... again!
1 week ago
Staycation scams: Warning issued for home holiday makers this summer
1 week ago
104 Pandemic Unemployment Payments cut following airport checks
1 week ago
Polar bears could be extinct by end of century due to climate change, predict researchers
1 week ago
"The best dad": Daughter of Mater doctor who passed away from Covid-19 remembers father's bravery
1 week ago
Taoiseach Micheál Martin apologises to Ruth Morrissey and family
Next Page