Almost 25,000 Irish women have traveled to the UK for an abortion in the last five years

On average, UK abortion clinics are performing 100 terminations on Irish patients every week.

According to new figures by Belfast-based journalism project Detail Data, and the Department of Health in the UK, 25,000 abortions have been performed on Irish women in England and Wales in the last five years alone.

In the years between 2010 and 2014, 19,947 girls and women from the Republic of Ireland and 4,652 from Northern Ireland made the journey across the Irish Sea to have an abortion. The figures are thought to be possibly even higher reveals Detail Data, as these numbers only account for those that have given an address in Ireland.

END_OF_DOCUMENT_TOKEN_TO_BE_REPLACED

The recently released figures also includes the number of girls under the age of 16 who had traveled for abortions, revealing that 152 young girls from the Republic and 69 under-16s from the north of Ireland had found themselves on a boat or airplane to the UK for a termination in the last five years.

The data obtained by the project also reveals not only how many women traveled, but also the individual clinics the women attended, with the map above illustrating the journeys they undertook to bypass strict abortion laws at home. 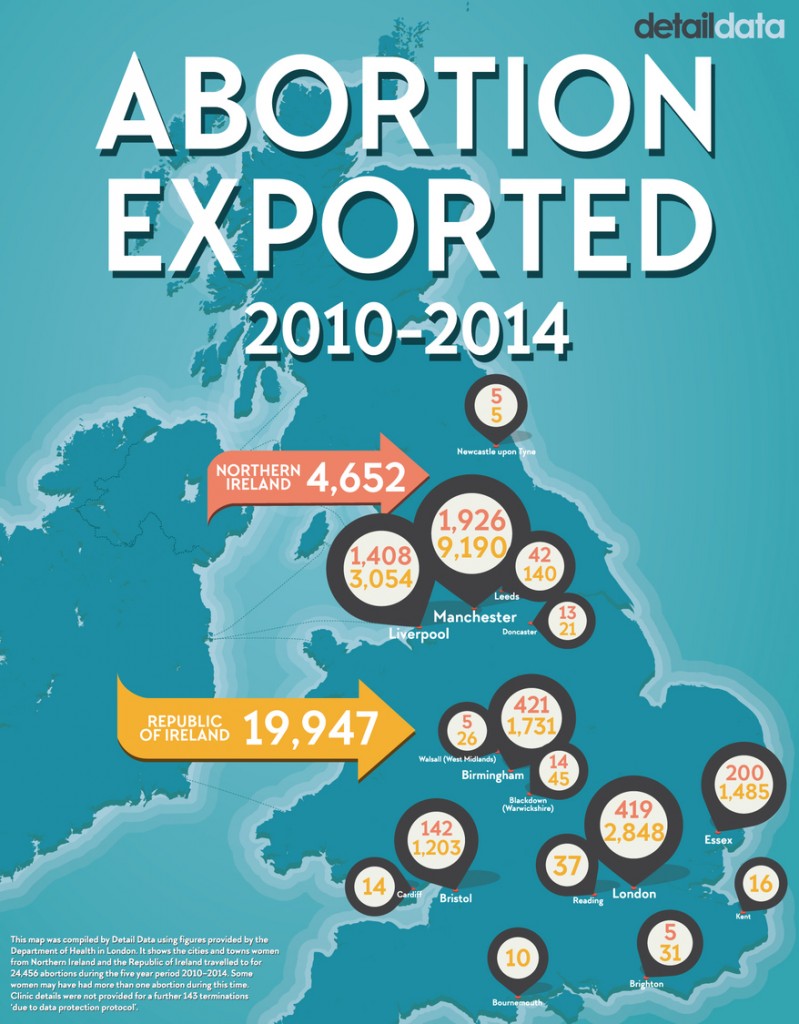 For a third of those traveling for a termination, Manchester was the destination.

END_OF_DOCUMENT_TOKEN_TO_BE_REPLACED

Women boarded planes or ships to travel to this city in the north-west of England to terminate over 11,000 pregnancies. Thirty percent of all of the abortions recorded (7,182) took place in one clinic there - Marie Stopes International Manchester.

As well as the psychological stress, having to travel to the UK for a termination can cost a women anything from £400 to £1,500 for the treatment alone, with travel and potential accommodation costs on top of this.

One abortion provider told the Detail Data researchers about women travelling for late term abortions (after 20 weeks gestation) in cases involving fatal foetal abnormalities most often decide to carry their baby’s remains on flights for burial at home. Some sought official permission from airlines for this – others just hoped the remains wouldn’t be found in their luggage.

Currently, abortions are only available in Northern Ireland if a woman’s life is at risk or if there is a risk of a serious long-term effect on her physical or mental health. In the Republic, as we know, abortion is currently illegal, except in circumstances where there is a real and substantial risk to a mother’s life.

END_OF_DOCUMENT_TOKEN_TO_BE_REPLACED

The punishment is life imprisonment for anyone who unlawfully performs a termination.

Last month, Belfast’s High Court ruled that Northern Ireland’s current abortion law is incompatible with human rights law in the case of pregnancies resulting from rape or incest or where there are fatal foetal abnormalities, but whether or not the law will be changed, remains to be seen.

The issue of abortion is a hotly debated topic of both sides of the Irish border, and these findings will no doubt add fuel to that already burning fire and debate around the repealing the eighth amendment, which gives equal status to the right to life of the unborn and the mother in the Irish constitution.

Are YOU shocked by these numbers? Where do YOU stand on the eighth amendment? Join the conversation with us on Twitter at @Herdotie