Bride in shock over personalised wedding gift sent by stranger

Such a lovely gesture.

An engaged couple from the US got more gifts than they'd expected ahead of their big day thanks to some generous strangers.

Mary Hall from Wisconsin is due to marry her fiancé Chuck Neese next week, 20 January.

END_OF_DOCUMENT_TOKEN_TO_BE_REPLACED

They were taken by surprise by a package that arrived for them recently which was labelled 'Please Open BEFORE Wedding Day'.

Inside was a pair of vintage champagne glasses and some Converse shoes along with a letter.

The glasses were engraved with the words "Let me dance with you forever, Mary & Chuck". 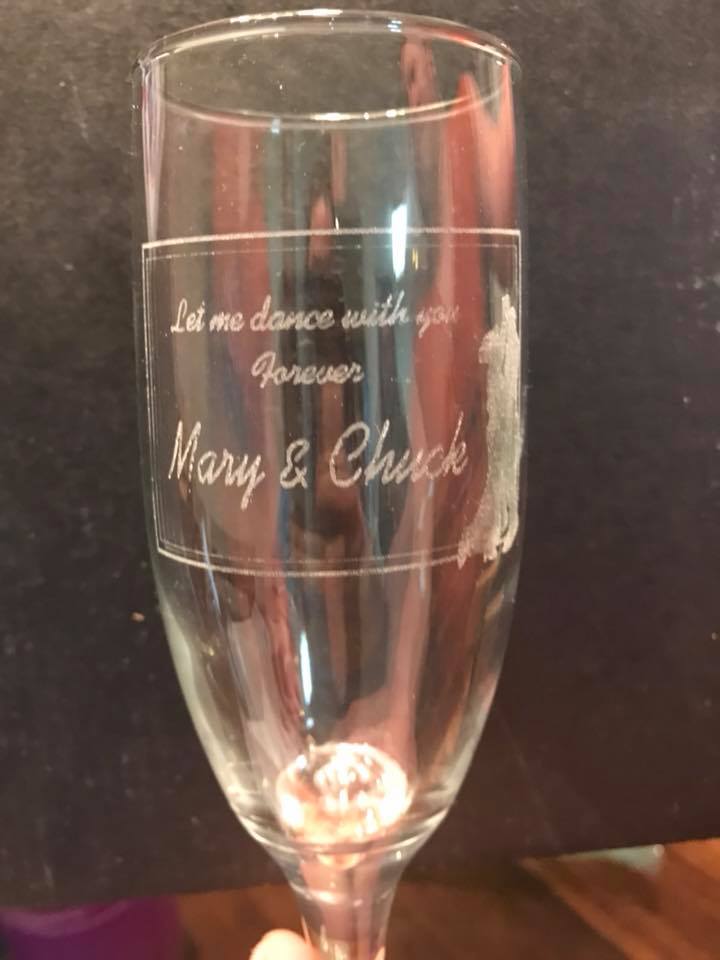 It had been sent by siblings whose parents were also called Chuck and Mary.

"You do not know us, but we found your names through a google search 'Chuck and Mary engagement notice'," the letter read.

"Through a little bridal gift registry 'detective work' we found an address to send this gift."

The champagne glasses had once belonged to the original Chuck and Mary. 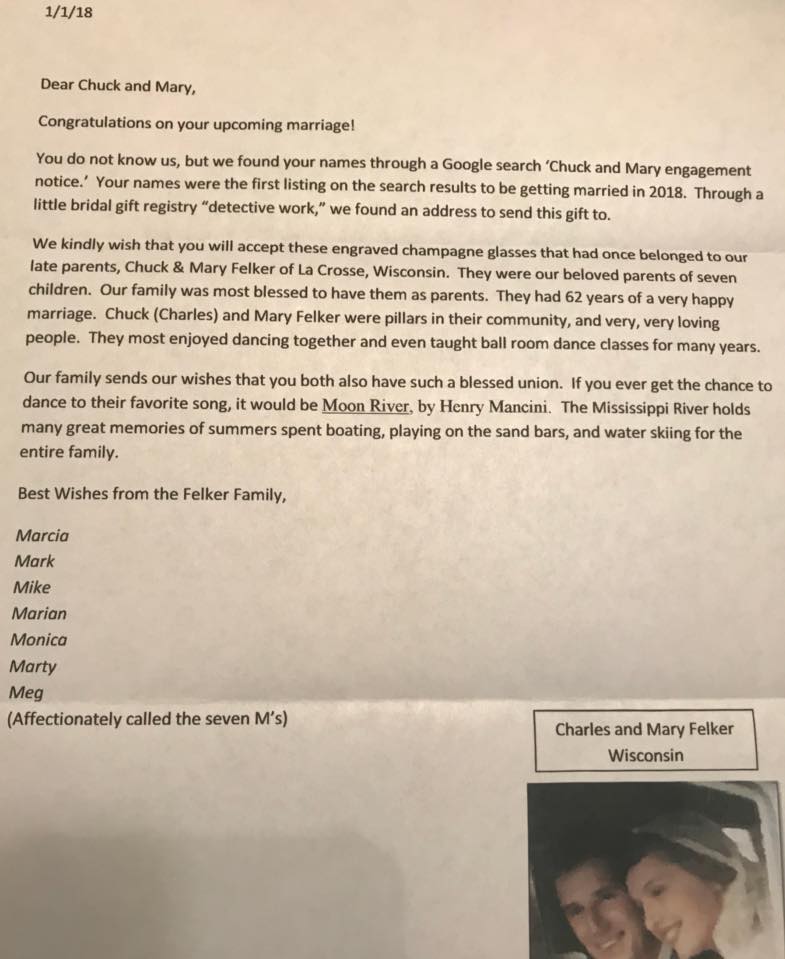 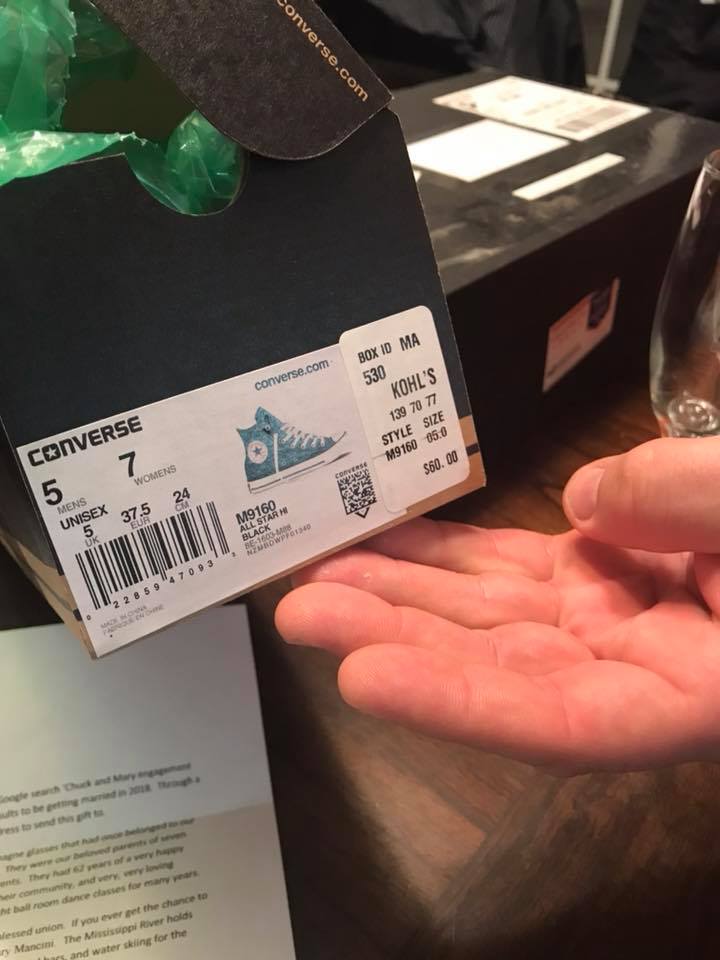 "They were our beloved parents of seven children," the letter continued.

"They had 62 years of a beloved marriage. Chuck and Mary Felker were pillars of their community, and very, very loving people. They most enjoyed dancing together and even taught ballroom dance classes for many years.

"Our family sends our wishes that you both also have such a blessed union."

"I just got chills and goosebumps all over," Mary told Liftable. 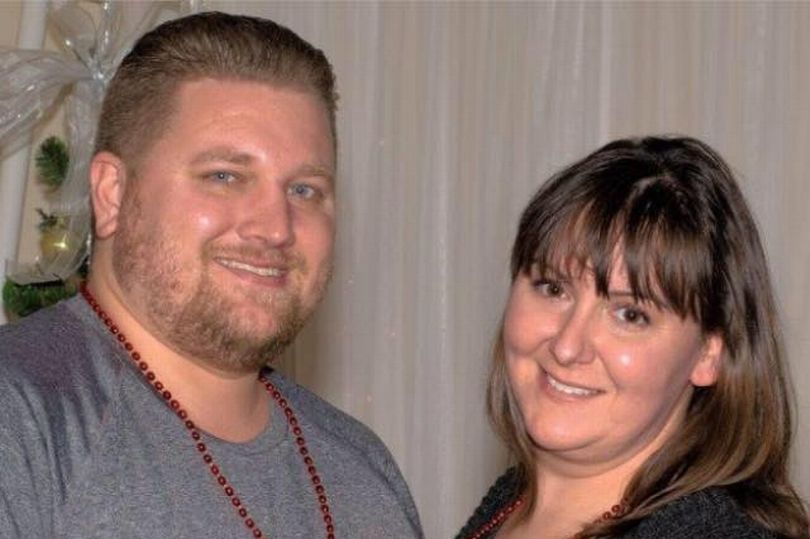 As it happened, Mary and her bridesmaids were to wear Converse on the big day.

"It was just all very much a bunch of coincidences all together. It’s all really cool."

Chuck and Mary have invited the seven siblings who sent the package to their wedding and say they plan to carry on the tradition and send the glasses on to another Chuck and Mary in the future.

popular
Irish mams are falling for the "nosey challenge" on TikTok and it's gas
This simple messy ponytail is everywhere and its effortlessly glam
The reason why Strictly Come Dancing's Pasha Kovalev left the show is actually really sad
Why Are Men so Obsessed With Boobs? The Answer is Pretty Surprising...
Love Island's Millie and Liam are moving in together
Here's what happens on every day of your menstrual cycle (roughly)
The 'real' reason Brendan Cole left Strictly Come Dancing has been revealed
You may also like
2 weeks ago
Married At First Sight star removed from show for "unacceptable" behaviour
3 weeks ago
Love Island’s Camilla Thurlow and Jamie Jewitt have gotten married 4 years after the show
4 weeks ago
Chloe wants a "flamboyant" wedding proposal from Toby
1 month ago
Bride left furious after catching groom watching football at their wedding
1 month ago
Model Sophie Anderton donates wedding dress to Irish cancer charity
1 month ago
Best man ordered to leave wedding by bride after risky joke backfires
Next Page