Hackers have reportedly leaked the personal details of millions of users of the website AshleyMadison.com.

According to a number of reports, hackers have access to the details of about 37 million customers, having reportedly appointed themselves as ‘the moral judge, juror, and executioner’ of the popular affairs website.

The hackers had threatened in July to release the details unless the website Ashley Madison and a second site were taken offline. 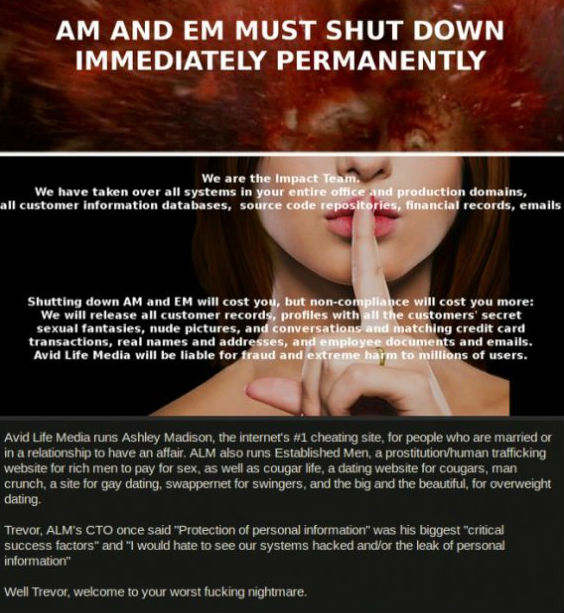 END_OF_DOCUMENT_TOKEN_TO_BE_REPLACED

“Avid Life Media has failed to take down Ashley Madison and Established Men,” the hackers, who call themselves The Impact Team are quoted as saying by Wired.

“We have explained the fraud, deceit and stupidity of ALM and their members. Now everyone gets to see their data.”

They reportedly used the dark web, which is only accessible using a specialized browser, to release the data.

popular
Claire Byrne Live viewers in shock as woman shares family DNA secret
Gogglebox fans show an outpour of support for star after hospital picture
Lesbian couple attacked in Dublin thank public for support
Two youths found guilty of violent disorder after girl pushed under DART
Saoírse Ruane's family "so grateful" after surgery goes as planned
Man behind Marilyn Monroe dress says letting Kim Kardashian wear it was a "big mistake"
Ex police officer pleads guilty to manslaughter of George Floyd
You may also like
3 months ago
Sex after Covid? Becoming intimate post-pandemic
3 months ago
Relationship troubles? An expert reveals this is probably your man's fault
3 months ago
Jenny Keane: "There is a huge vulnerability when it comes to exploring your sexuality"
3 months ago
Best friends find out they're pregnant on the same day and give birth an hour apart
4 months ago
Study shows over half of people open to getting with their flatmates
4 months ago
Text your ex over Christmas, yeah?
Next Page