They said it themselves, it is a cliché... but a funny one at that. We've seen it in movies and on TV shows but we've never actually come across it in real life... until now.

Yesterday, the Dublin Fire Brigade Twitter shared a post about one of its firemen rescuing a cat from a rather tall tree. 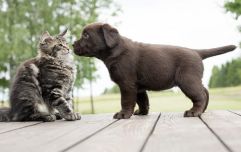 END_OF_DOCUMENT_TOKEN_TO_BE_REPLACED

It's always heartbreaking to see an animal in need, however this little kitty didn't look too happy about the man coming to save it.

Dublin Fire Brigade wrote: "It's a cliché but we do assist animal rescue rescue organisations when, for example, longer ladders are required. The rescued animal normally looks a bit happier though."

It's a cliché but we do assist animal rescue rescue organisations when, for example, longer ladders are required. The rescued animal normally looks a bit happier though ? #Dublin #fire #community pic.twitter.com/TBchWeugqB

The fireman looks more scared of the cat than the cat of the fireman, if we're honest...

Many followers of DFB found the picture absolutely hilarious and loads commented on it:

He does not look oovercome with gratitude, that's cats for you

How pissed off is that cat ??

Girls With Goals || Her · Ep.161: Feeling Peachy - Sharon Keegan of Peachylean on being an absolute BOSS!
popular
Harry Styles accepts BRIT for Best British Single - with American accent
Is that Seth Rogen without a beard?
Woman buys 148 year old house, goes viral after finding secret passage way
Penneys issues statement after shoppers try to sell appointments for €100
9 Dublin restaurants with outdoor dining we've already booked a table for
Nine-year-old boy dies after being struck by lightning in UK
Here's what happens on every day of your menstrual cycle (roughly)
You may also like
1 month ago
Missing cat returns home after 14 years away
1 year ago
Bad news klaxon! Kissing your pet on the mouth may be damaging your health
1 year ago
Cat ladies unite! Research shows that owning a cat is good for your health
2 years ago
Juju the cat was born with no elbows and she's the most precious little thing
2 years ago
Cat that went missing 10 years ago has just been found
2 years ago
Woman reunited with pet kitten after months-long custody fight
Next Page