Every single one of us has been ghosted.

It's the norm these days.

Meet someone you vaguely like, go on a few dates with them, text from time to time, maybe even start to develop some actual real-life feelings and then BOOM - ghosted to fuck.

A lot of people will say it's not personal, but it is.

You, specifically, have just been ghosted - ignored, let down, and essentially dropped, either because something better came along or they just can't be bothered with you anymore.

Dunno which is worse, tbh.

Or so they say. 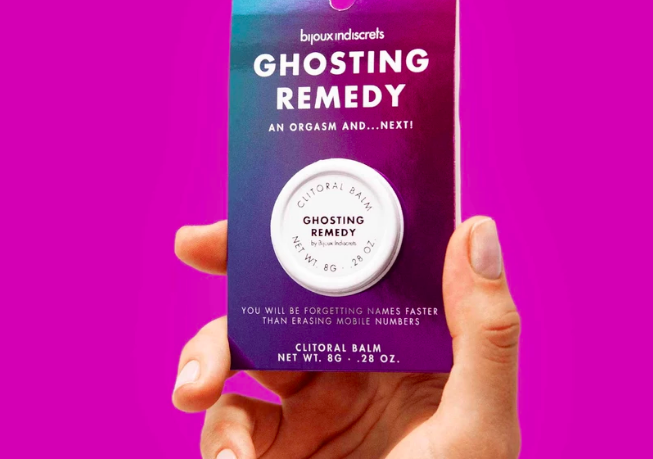 END_OF_DOCUMENT_TOKEN_TO_BE_REPLACED

"You'll forget his name in less time than it takes to clear his number," reads the product description.

"This special clitoral balm prepares your body for more intense orgasms. It offers a soft texture thanks to its base of coconut oil and almond oil, and provides an instant heating effect that activates the blood circulation in your clitoris to increase the sensitivity.

"Put your finger on the surface of the balm and apply it on your clitoris: you will instantly notice its heating effect!"

The balm encourages increased sensitivity via its heating effect, which lasts around half an hour depending on the person.

It also only costs €9.95 not including shipping for a 28oz pack too so, you know, more bang for your buck.

popular
Selling Sunset's Chrishell Stause reveals "the brokerage has split"
Kate Middleton has addressed the rumours that she's pregnant with her fourth child
Dirty Dancing officially arrives on Netflix today and that's our Sunday sorted
Here's what happens on every day of your menstrual cycle (roughly)
There's a Friends makeup collection coming, featuring Phoebe, Monica, and Rachel palettes
All of the Love Island couples that are still together (and those that aren't)
15 signs that prove someone is falling in love with you
You may also like
4 months ago
'Not just a celebration': Creators of Avocado Toast the series talk sex, sexuality, and swinging
4 months ago
Paul Mescal 'incredibly proud' of sex scenes in Normal People despite criticism
5 months ago
Are the IT GALZ up on their sexual health knowledge? We tested them to find out
7 months ago
QUIZ: Are you using condoms properly?
9 months ago
The average couple gives up more than a week of sleep to have sex
9 months ago
The lotus sex position, ideal when you're feeling lazy AF
Next Page