"I was holding out for more the entire time": Why do so many of us go back to our exes?

Except, we do, actually. For all of the discourse around never going back there after a breakup, a substantial number of us continue to do it. For another chance, for sex, for the comfort of knowing exactly what it is we're signing up for.

For all the reasons why we shouldn't, for all the friends telling us to please move on, for a lot of people, the temptation of returning to the past remains. But just what is it about exes that have the power to pull us back in, and is it ever, ever worth it?

END_OF_DOCUMENT_TOKEN_TO_BE_REPLACED

Maura* ended things with her ex the first time because he cheated on her... with his ex. "How fitting," she tells Her.

She had tried to move past the cheating and tried to enjoy a physical relationship, but her ex was still jealous and possessive, which was ironic, considering the cheating. In the end she simply decided that irrespective of how good he was in the bedroom, it wasn't worth it.

"I completely unsubscribed on an emotional level, but I was still signing up for D appointments," she says. "It was messy. So messy.

"Because I had been cheated on I was capable of having no strings attached sex but it led to murky water. We both deserved clean breaks. His feelings were hurt and I felt empty by the end of it.

END_OF_DOCUMENT_TOKEN_TO_BE_REPLACED

"I was going back for sex because it was easy for me, but he was essentially trying to get back together and it was very difficult for him. We couldn't maintain a friendship after that. I think we would have had a better shot if we just fully detached from one-another."

According to poll conducted on Her's Instagram Stories, 70% of people say they would never get back with an ex in the future. A further 41% of people, however, admit to having already done so in the past. 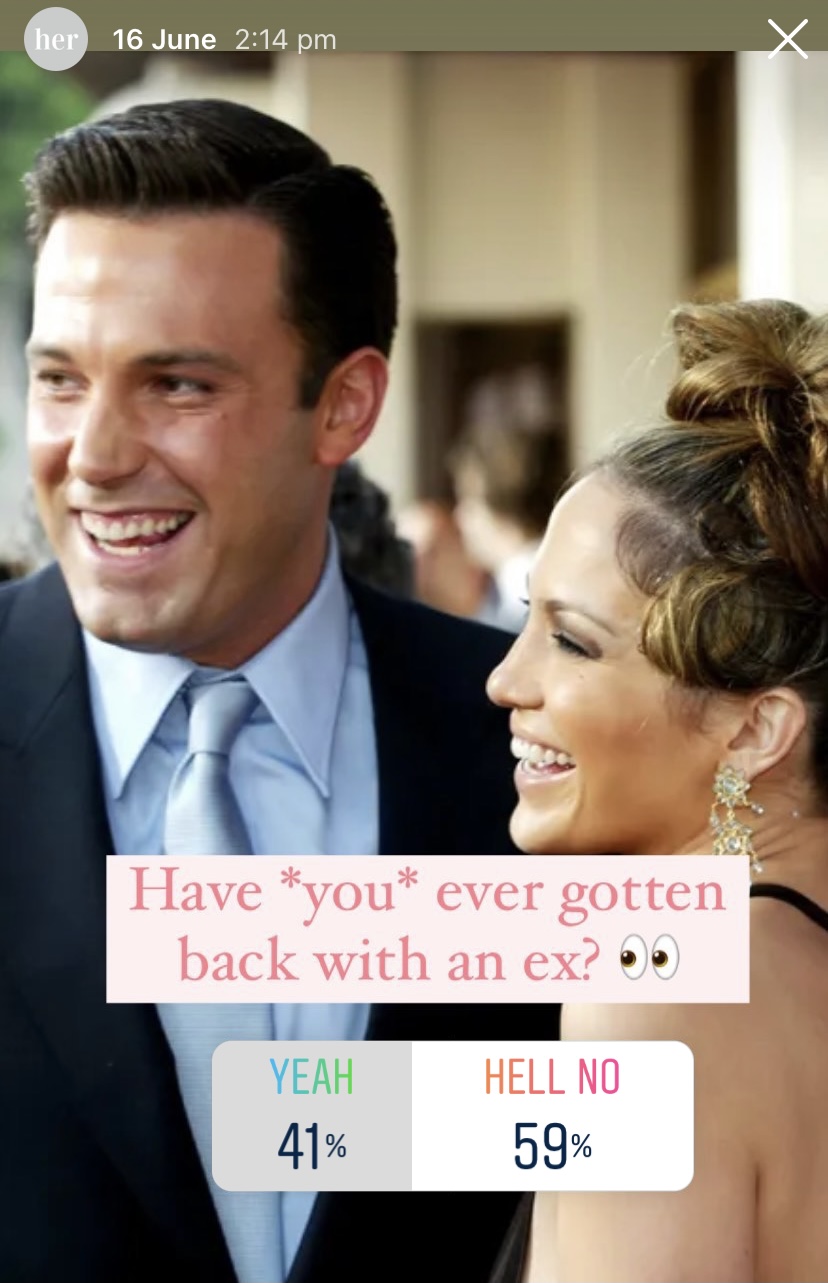 Those who went back for more say they did it because their partner redeemed themselves, or because they made a mistake the first time round. One or two even reported eventually marrying the ex they had split from.

END_OF_DOCUMENT_TOKEN_TO_BE_REPLACED

Others simply say that they did it for sex, for comfort, or because they were bored. Others say they actually preferred the relationship as casual, rather than as serious as it had been before.

Caroline* started seeing her ex again about a year after they called it quits. What started out as casual messaging and the odd social media catch up soon turned into what she describes as a "friends with benefits situation" - one that is currently going a lot smoother than when they were actually a couple.

"I find there’s less pressure, since we aren’t 'together together,'" she says. "I don’t feel bad if I don’t have time to see them whereas in relationships I can find myself feeling really guilty for not prioritising who I’m dating - habits I learned from a previous relationship. With this situation I feel there isn’t a standard I’m supposed to be living up to."

While most people are immediately dubious when a friend says they've gotten back with an ex, Caroline says that there are plenty of reasons why it happens - and plenty of times that it does work out.

"An important part is understanding your own expectations and theirs," she says. "Keeping lines of communication open is essential. There’s a lot to consider when having an ex be a part of your life again. There’s no point if one person is doing it for something casual and the other is hoping to win them back." 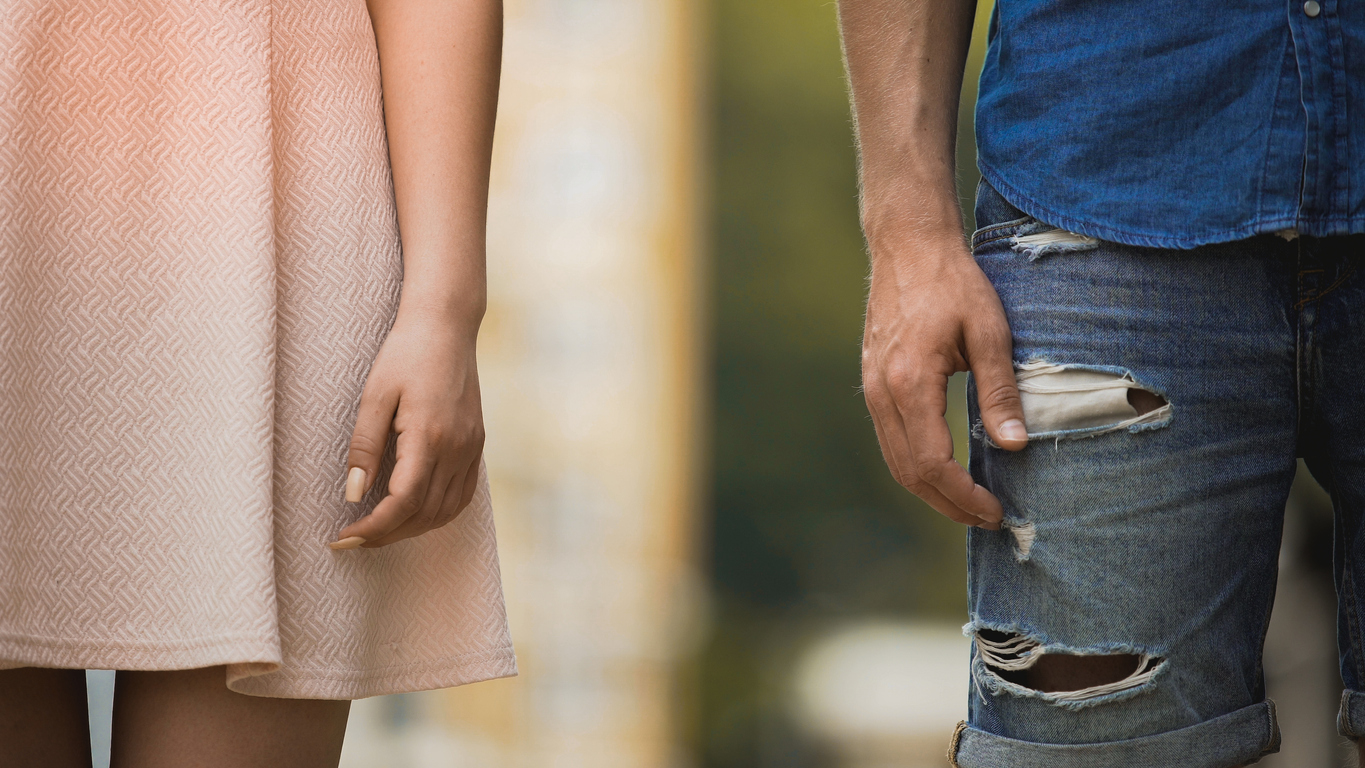 Kate* was unfortunately trying to win someone back when she got back with her ex. And she was hoping he would want her back too.

After her relationship ended, she began seeing other people but her ex was constantly on her mind. Eventually, they refollowed each other on Instagram and started chatting again. He wanted to meet up for sex, and he wanted to keep things casual.

"I, of course, was holding out for more the entire time," says Kate. "And in fairness, when a lad is telling you he thinks you're amazing and wants to see you all the time, what're you supposed to think? You don't really expect him to be sleeping with other people.

"He would invite me over to his house and then talk about the other girls he was seeing. He'd always say that it was fine to mention because I wasn't his girlfriend. I never mentioned anyone I was seeing because I thought it was pretty rude. I was also still hoping he'd eventually want to be exclusive again."

Kate says that although she's aware every situation is different, she would never go back to an ex again. Not just because she's afraid of the same thing happening, but because she wants to be able to trust her judgement the first time round.

"I have huge regrets," she says. "I'm not mad at myself for going back there, I thought it would make me happy at the time, but he wasn't a good person and I suppose I needed a bit of extra time with him to see that. If I didn't, I'd always have wondered whether we would've worked. At least now, I know."

A 2019 survey revealed that just 15% of people actually manage to win their ex back, while 14% just end up breaking up again anyway - which begs the question, why are we bothering with it at all?

"We all love a bit of a danger zone don't we?" Maura says. "We know exactly what's on the menu. It's like going back to a restaurant you used to like but haven't tried in awhile.

"Dating, while fun, is time consuming and it comes with disappointments. We know what we're getting when we engage with our exes."

popular
Netflix's true crime series Sins of our Mother is seriously insane
Why Are Men so Obsessed With Boobs? The Answer is Pretty Surprising...
So, William and Harry have a step sister... and who knew?
Dyson's new limited edition hair tools is our Christmas list sorted
Smyths issues warning to parents ahead of Christmas
Brian O'Driscoll brings the wrong dog home from the groomers
Riverdale actor Ryan Grantham charged with murder of his mother
You may also like
3 days ago
Rylan Clark was hospitalised with two heart failures after marriage breakdown
1 month ago
Jeremy Kyle's security guard Big Steve is now on Drag Race
1 month ago
Forget hygge and lagom – there's a new Scandi lifestyle trend to obsess over
1 month ago
McDonald's increases menu prices due to rising inflation
2 months ago
People everywhere swear their lives changed using this manifestation method
2 months ago
Warning issued as UK could hit 41 degrees today
Next Page