Instagram Yogi Hits Back At Body Shamers With ‘No Apologies’

This week saw Essena O’Neill take down her own Instagram presence this week, after deleting her social media accounts and revealing a series of poses and endorsements she was paid to promote.

Deleting her Instagram photos, the Insta model then launched a new site and is now being accused of faking the entire exposé. 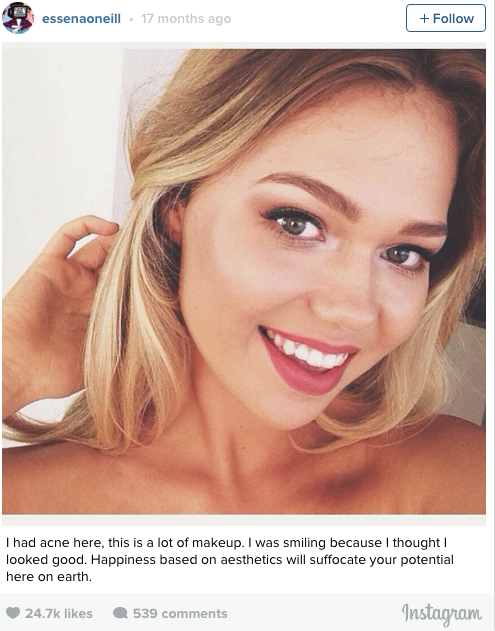 END_OF_DOCUMENT_TOKEN_TO_BE_REPLACED

Now, one Instagram fitness star and yoji Sjana Earp has revealed to her nearly 1 million followers that she’s started censoring her comments – to remove ‘negativity’ from her page.
Scrolling through Earp’s feed, the travelling yogi takes time to share dramatic poses – with followers noting her form and figure on a series of beaches worldwide.

The yogi has explained that she now refuses to let anybody shame her about her “skinny” body, and has decided to block out comments or followers that are set to make negative comments on her appearance.

“I am so much more than a body - I know that. I am not defined by numbers OR by other peoples opinions of me. And the body I have, as imperfect or "skinny" or "gross" as people may think it is, is MY imperfect body. And I am happy with it despite their irrelevant opinions. My imperfect body helps me to move, travel, explore, play, and even hug people. To me, that makes it beautiful.

My body is natural and unmanipulated - that to me means that nothing about it can be "wrong". We don't look at a landscape and criticise the shape of a valley or the size of a mountain do we? So why are we so quick to judge other natural things like the human figure?”

She continues: “It is probably sad, but I have become so used to peoples comments on my external appearance that they no longer bother me. I simply block any user and delete their comments if they are critical of me OR anyone else OR if they swear because I want this space (my profile) to be a place of love, empowerment and positivity… Not judgment and criticism.”

END_OF_DOCUMENT_TOKEN_TO_BE_REPLACED

Earp adds that she’s not going to apologise for posting an image of herself:

“I'm not going to shame my own body because other people don't believe it is attractive or "normal". I have never and will never suggest that other people should aspire to have my body. In fact, it's the opposite. Me posting an inage which has my body in it is about celebrating the human form DESPITE the way it does or doesn't meet social expectations and standards.”

Which is a pretty powerful message from a 20-year old – to recognise that your value should come from your resilience, character and personality:
“…their resilience, their strength, their determination, their values, the way they see the world." To me, that is beautiful. Not being a certain weight, size or body shape.”

popular
Gardaí seize two cars linked to Ashling Murphy death as they question new suspect
A celebrity hairstylist just shared a genius hack for the perfect messy bun
What we can expect from Emily in Paris seasons 3 and 4
Penneys has a new homeware collection – and it looks so high-end
Campaign to decommission Operation Transformation garners over 8,000 signatures
Zayn Malik has reportedly signed up for a dating app after Gigi Hadid split
Love Island's Chloe Crowhurst is pregnant with her first child
You may also like
4 days ago
Government to consider new bill around issue of harmful online content
1 month ago
Everything you need to know about Instagram's new 'take a break' feature
3 months ago
9 of the best memes from when Instagram and WhatsApp were down
3 months ago
Facebook, Instagram and WhatsApp down as outage hits for hours
3 months ago
Hallelujah! Britney Spears returns to Instagram
4 months ago
Why did Britney delete her Instagram?
Next Page