"They leave you feeling so degraded" - Street harassment needs to stop

The least we should expect is that women and girls can walk down the street without fear.

Too many times, I’ve found myself dealing with street harassment. I’ll be walking alone, minding my own business, when some bystander thinks my day will be made if they fire a sexually suggestive remark my way.

END_OF_DOCUMENT_TOKEN_TO_BE_REPLACED

And too many times, I’ve been told to take it as a compliment.

But it doesn’t feel like a compliment. It feels like an exercise in male power, an attempted enforcement of dominance, a way to dehumanise me - and it's humiliating.

Former Love Island star Maura Higgins recently spoke out about her experience with street harassment, following a scary ordeal at the NTAs when a man tried to pull her into a car. This type of behaviour, she said, is “actively predatory, repeatedly violating women’s personal space and boundaries.”

The tragic murder of Sarah Everard, and now the similar murder of Sabina Nessa, have prompted much discussion about women’s safety in the streets. Both women were just walking home. These recent events instill a deep-rooted fear in many women and despite the insistence that something like catcalling is harmless - it’s not. It holds the threat that we might face a similar fate to these women.

END_OF_DOCUMENT_TOKEN_TO_BE_REPLACED

The first time I was followed home was after a late shift at work. I was walking alone when a group of men appeared behind me and immediately started firing unwanted ‘compliments’ my way. I didn’t look back and began walking faster.

“Leave her alone, you’re being rapey,” one said of them said to another. "She thinks we’re gonna rape her.”

His comment was met with a chorus of obnoxious laughter. The sound of the r-word was a trigger, like it would be to any woman, and I started running. Thankfully, I was only metres from my apartment and made it home safely but I dread to think what could have happened had I not been so close.

Now any time I walk alone at night, I walk fast, I take out my headphones, and I hold my house key in my clenched fist - as a weapon.

I have yet to talk to a female friend who doesn’t have a similar story. And no, we don't think all men are out to get us, we just want to walk the streets without fear. 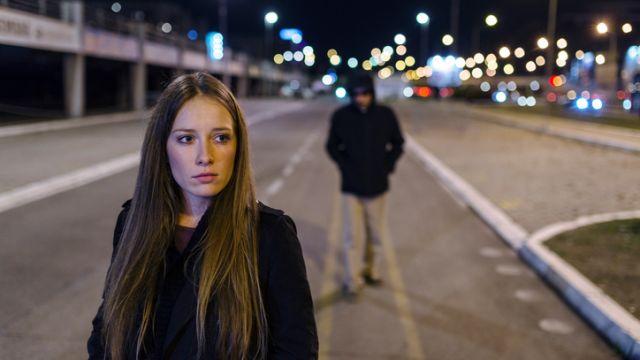 Three Irish women shared their experiences of street harassment with Her.

Christina, 27, says she has been randomly grabbed and catcalled in the streets on numerous occasions, but recalls a time when things became a little more sinister on an evening walk home.

"When I got off the bus, I noticed a man lingering around me. I started walking and he followed. He told me he had noticed me on the bus and had to tell me how beautiful he thought I was. I was visibly uncomfortable but just laughed awkwardly and said thanks.

"He kept grabbing my arm and pulling me towards him and I kept pulling away to try to get my arm free. He was quite aggressive but trying to play it off as flirtatious, laughing. I was close to tears the entire time. So I ended up giving him my Facebook because I thought at least I can block him and at least he’d let me go.

"For a long time, any time I walked alone at night, I would start to panic if I heard footsteps behind me.”

‘He immediately just grabbed me down there.”

Laura*, 24, says the first time she remembers experiencing street harassment was when she was 15 years old.

“I was walking home from my friend's house with a few other girls,” she says. “There was a group of men outside a pub and one of them wolf-whistled at me. My friends were disgusted and one of them shouted over: ‘She’s only 15!’

“They all just continued to laugh - they thought it was hilarious. I remember feeling really embarrassed and wondering if I should have covered up more - even though I wasn’t wearing anything revealing.”

Catcalling is something Laura has unfortunately become accustomed to over the years, but one darker experience has stayed with her forever.

“Another time, at Electric Picnic, I was going to the rave in the forest and I fell back behind my group in the crowd. So I was by myself, trying to catch up.

"A group of lads stopped me and one of them was wearing a high-vis jacket. He said he had to search me before I went in. I assumed it was just a regular security check - I had a few drinks in me at that point of the night.

"He immediately just grabbed me down there. I was so shocked and tried to push him away. All of them started laughing at me. It was an awful experience because you don’t know if people are going to believe you about if it even happened. That really sticks with me a lot to this day, to be honest with you.”

“They leave you feeling so degraded.”

Ceara, 28, says that not all street harassment involves something as big as being followed or attacked, some are smaller “micro-actions” and even occur in broad daylight.

“Sometimes it’s not as big as being followed or attacked, it’s like micro-actions. Numerous times I’ve been shouted at and groped in the street and it’s always infuriating. Once, on a packed train platform, someone just ran by and slapped me on the ass. It's these kinds of actions, they leave you feeling so degraded.

"I remember a hot summer day eating an ice-pop on a busy street in Dublin, when I walked past a group of men. One shouted 'You can suck on my lollipop any day!' Everyone in the street looked at me, the men erupted in laughter, and I threw my ice-pop in the bin. I was on the verge of tears.

"It seems like such a small thing, but for a long time, I felt uncomfortable eating in public. There is a difference between getting a compliment and getting harassed and I think it's an obvious one.”

So, what can be done to make women feel safer? There is no one answer but what can help is a larger discourse around the topic. Talk to your friends about why it’s not okay. Call street harassment out when you witness it. Don’t stand by, say something.