Michaella McCollum has a new career and it might surprise you

Can't say we predicted this.

Michaella McCollum has become somewhat of a household name after she and Melissa Reid were convicted of smuggling almost 11 kilos of cocaine, worth an estimated €2 million, in 2013.

It has been almost a year since the duo were released after serving one-third of their prison sentences in a Peruvian jail and now, reports suggest Michaella has landed a new career as a TV presenter.

According to Mail Online, the Tyrone native will front a new crime series, where she will interview international drug dealers and examine "unsolved or unusual crime cases around the world".

"Michaella was meeting with potential interviewees for her new documentary series.

"There are several international drug dealers from the city and this is going to form a few episodes of the series". 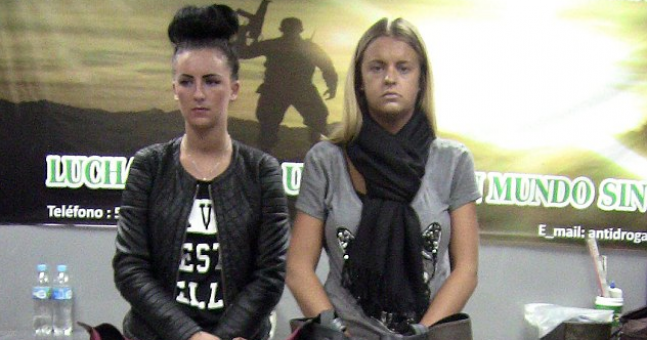 Melissa and Michaella pictured during their Peru tenure

There are rumours that 24-year-old Michaella has been offered a six-figure sum to take part in the programme, reportedly based in Liverpool's Merseyside area.

In addition to this, Michaella and Melissa, who hails from Glasgow, are thought to be in 'advanced talks' to appear in the new series of Big Brother, which is believed to have a 'pairs' theme this year.

popular
Miracle baby on the way for bride whose partner died on wedding day
Johnny Depp confirms he will be back as Grindelwald in Fantastic Beasts 3
How to INSTANTLY unblock your stuffy nose (we swear this works)
Someone has ranked the penis size of men from all over the world
Here's the average age people lose their virginity around the world
Margot Robbie is reportedly pregnant with her first child
Why Are Men so Obsessed With Boobs? The Answer is Pretty Surprising...
You may also like
1 day ago
Gardaí renew information appeal for 25-year-old hit-and-run case
1 day ago
New 911 call claims Brian Laundrie 'slapped' and 'hit' Gabby Petito
2 days ago
Dad pays tribute to two children, their mother, and friend killed at sleepover
2 days ago
Woman in her 50s dies following Monaghan road collision
2 days ago
Body found in search for missing YouTuber Gabby Petito
5 days ago
Mother charged with murder of three children in New Zealand
Next Page