Everyone grows up reading the wonders of Roald Dahl. Whether you’re a chocolate dreamer like Charlie, or wish to get lost in a world of books and magical spells like Matilda, the master storyteller had a way with words we still cherish today.

So when an aspiring 17-year old author wrote to Roald Dahl, we can’t imagine his reaction when he got a response from one of his idols.

Jay Williams sent a sample of his writing to the famous author in 1980, with dreams of being mentored by the wordsmith.

Instead he got some pretty blunt, if not helpful, advice. But being a Roald Dahl fan we bet he was pretty excited to get such attention from the man himself.

Williams, said he hoped to hear how he was a talented writer, saying:

“As a callow youth, I was expecting him to tell me how marvellous the story was, and offer to introduce me to his publisher. Instead he gave me this fairly forthright criticism

“The story was for an A-Level English Literature project, and was probably really self-indulgent, overflowing with flowery adjectives, which Dahl quite rightly bristled at.

“After considering his advice, I have to admit it was probably fair and I’ve taken heed of it ever since.”

In fairness, if you have to take constructive criticism – at least it’s from the best." 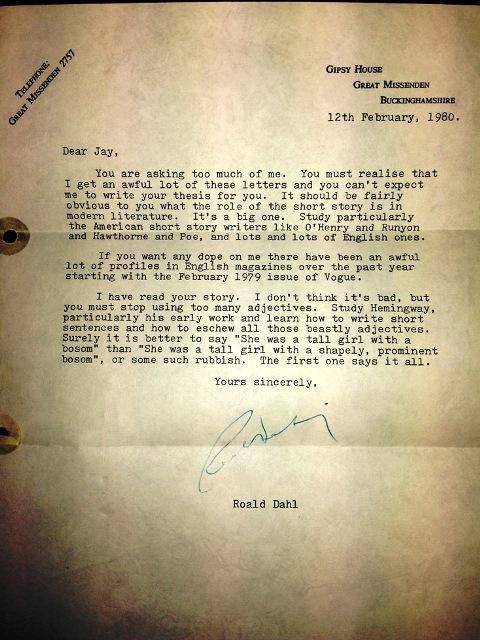 Girls With Goals || Her · Ep.160: The Beauty Of Coaching - Hayley Harrison joins us from Sport Ireland
popular
ASOS is selling moob tubes and we all know someone who'd wear one
Man discovers 'fake cupboard' in kitchen is actually a dishwasher
More footage of Tristan Thompson cheating on Khloe has emerged
Hailey Bieber addresses pregnancy rumours after Thanksgiving photo sent fans wild
How to INSTANTLY unblock your stuffy nose (we swear this works)
Someone has ranked the penis size of men from all over the world
Khloe Kardashian has JUST confirmed she is pregnant
You may also like
1 month ago
5 new books released this April we're dying to tuck into
1 month ago
Stacey Solomon: How to make your own watering can garden light
1 month ago
Stacey Solomon: How to turn your old perfume bottle into a fragrance diffuser
1 month ago
Irish authors Naoise Dolan and Kathleen MacMahon longlisted for Women's Prize for Fiction
3 months ago
Books: 7 new releases to get stuck into this February 2021
4 months ago
85 brilliant books that we can't wait to curl up with in 2021
Next Page