R. Kelly is finally found guilty - but why did it take so long?

The verdict is welcome, but it is long overdue.

Yesterday, R. Kelly - whose real name is Robert Sylvester Kelly - was found guilty on all nine charges in his sex trafficking trial.

The verdict follows a six-week trial in which nine women and two men spoke about the sexual violence and abuse they experienced at the hands of the musician.

END_OF_DOCUMENT_TOKEN_TO_BE_REPLACED

Kelly was charged with eight counts of sex trafficking and one charge of racketeering, after the court heard how he sexually abused women and girls through a criminal scheme.

The rapper now awaits sentencing on 4 May, and he may spend the rest of his life in prison.

In their impact statements, a number of survivors shared their reaction to the verdict.

One woman, identified in court as Sonja, testified that Kelly drugged, imprisoned and raped her. She wrote yesterday: "I'm ready to start living my life free from fear and to start the healing process."

END_OF_DOCUMENT_TOKEN_TO_BE_REPLACED

Lizette Martinez, who also testified against Kelly, said that she was "relieved" by the verdict.

She added: "I'm so proud of the women who were able to speak their truths."

Indeed, the guilty verdict was welcomed by survivors of rape and sexual violence, not only in the trial, but around the world. However, it's also difficult to ignore one glaring question. Why, despite the overwhelming body of evidence against Kelly, did it take so long for justice to be served? 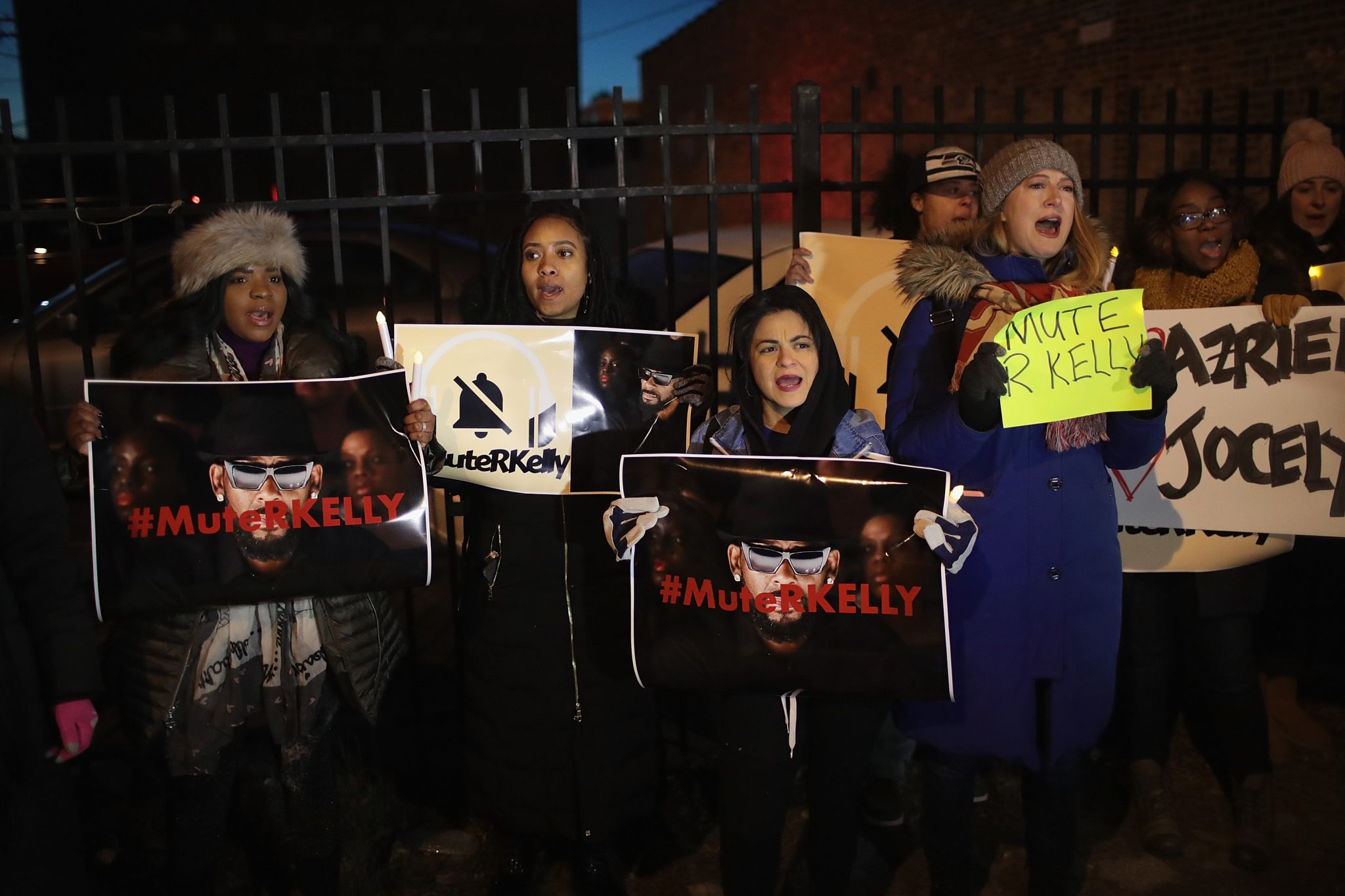 END_OF_DOCUMENT_TOKEN_TO_BE_REPLACED

Allegations against Kelly have been circulating for almost 30 years. In 1994, he married Aaliyah when she was just 15 and he was 27. Then, in 2002, he was charged with 21 counts of making "indecent images of children", as reported by Sky News. The trial was delayed 2008 and Kelly was eventually acquitted.

Years later, in 2019, the release of the documentary Surviving R. Kelly detailed further sexual abuse allegations against the musician.

Kelly was able to get away with his crimes for so long due to numerous reasons. For starters, he was propped up by his fame, money and influence. The rapper was operating from an undeniable position of power. All the while he was committing abuse, his net-worth climbed, as he sold 100s of millions of records around the world.

On top of that, prosecutors said that managers, security guards and members of Kelly's entourage helped facilitate Kelly's abuse.

Crucially, Kenyette Tisha Banes, one of the founders of the #MuteRKelly movement, says that the reason Kelly was not held accountable for so long was because he targeted "young black girls from inner-city Chicago."

He said: "What the 48 women whose stories I've told in the last 21 years have all said to me is that nobody matters less in America than young black girls. They are simply not believed, and women in general are not believed about a sexual abuse story. But black girls in particular."

Even in the aftermath of the #MeToo movement, the experiences and testimonies of Black women and girls are routinely sidelined. According to a report published on now.org, unfounded biases often lead to reports of sexual violence against Black women being ignored or dismissed. Additionally, studies show that Black women experience higher rates of intimate partner violence.

While R. Kelly's guilty verdict is welcome, it is long overdue. The case points to the need to treat the reports of survivors of sexual assault seriously, and to tackle the power systems - systemic racism and misogyny - that allow abusers to get away with their crimes.

popular
Primark reintroduces female-only fitting rooms after two men walk in on woman
Davide Sanclimenti opens up on having kids with Ekin-Su Cülcüloğlu as he turns down Dancing On Ice
8-year-old Ukrainian girl stabbed in Clare 'out of danger'
Anna Delvey is set to be released from prison
Man and woman charged with murder of four year old boy in 2021
Woman tells Kate Middleton 'Ireland belongs to the Irish' during Belfast visit
Why Are Men so Obsessed With Boobs? The Answer is Pretty Surprising...
You may also like
1 hour ago
Grey's Anatomy star Kate Walsh accidentally spills engagement news
1 hour ago
Meteor shower to be visible over Ireland tomorrow
2 hours ago
Samantha Womack to start chemotherapy after breast cancer diagnosis
2 hours ago
Every first-time buyer needs to check out this FREE virtual mortgage event
2 hours ago
Love Island's Dr Alex shares that he has ADHD
3 hours ago
My Therapist Ghosted Me adds a third 3Arena date
Next Page