It's tradition, but where does it come from?

Some women have dreamed of getting married from a young age. The dress, the venue, the person they love. Before the marriage, comes the engagement and we're sure many of you have dreamed of that too.

Where it will happen, what the ring will be like, who will be the person bending down on one knee?! 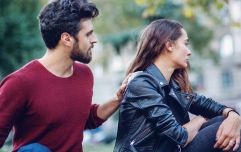 Man sues friend for £1.9m after she refused to be his girlfriend

END_OF_DOCUMENT_TOKEN_TO_BE_REPLACED

Bending down on one knee has been the tradition for centuries and we've seen it both in movies and in real life... but where does it come from?

In fairness, when you think about it, it's a strange tradition. Why do they have to literally go down on the ground? On their knees?!

Well, wedding website Engagement Ring Bible wanted to find out exactly why it happens, and it turns out it goes back to actual medieval times.

"Knights would get down on one knee in front of their lord as a display of respect, obedience, and loyalty. It was also a common occurrence in religious ceremonies, and in those days marriage and religion were intrinsically linked.

"So when a courteous gentlemen was proposing to his lady, pledging his allegiance to her and declaring his undying love for her, getting down on one knee was the natural thing to do."

While many may choose to not go down on one knee (which is absolutely fine - they're still asking you to marry them!), if they do it's basically a very old way to show you they love and respect you.

popular
Looks like Maura Higgins knew Molly-Mae's baby name this whole time
Here's why Nicola Peltz-Beckham's family are suing her wedding planners
Tommy Fury responds to Jake Paul ruining his baby news
Love Island's Zara speaks out after being dumped from the villa
Chrishell Stause faced "unbelievable" trolling for relationship with G-Flip
Wayne Lineker called out for comment on Tommy and Molly-Mae's baby news
Bachelor Nation star Sarah Herron's baby passes away shortly after birth
You may also like
4 weeks ago
What is 'damp January' and why are people trying it this month?
4 weeks ago
It's official - the Irish accent is the sexiest
4 weeks ago
These are the "luckiest" days of the week for each Zodiac sign
1 month ago
10 New Year's resolutions that might actually end up changing your life
1 month ago
Buying your first home in 2023? This FREE online mortgage event is perfect for you
1 month ago
People are just realising the special Christmas feature Ring doorbells have
Next Page