This is why the royal family don't wear seatbelts while driving

Prince Philip caused quite a bit of bother last week.

The Duke of Edinburgh's Land Rover collided with another vehicle and overturned last week near the Queen's Sandringham estate.

Two women in the other car were hospitalised following the incident. A baby had also been present in the vehicle. 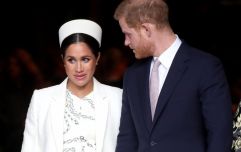 Breaking royal birth protocol? Or just doing what any normal person would do?

END_OF_DOCUMENT_TOKEN_TO_BE_REPLACED

48 hours later, Prince Philip was spotted driving near the entrance to Sandringham in a replacement Freelander without a seatbelt.

However, now a former royal security officer has said that it's not uncommon for the royal family to go without a seatbelt. Apparently, it means in the case of an emergency, they can escape more easily than if they were strapped in.

Former royal protection officer Simon Morgan told Hello! Magazine: "There are always anomalies. In the threat and risk matrix it's a matter of looking at each individual situation to decide what is the best way of achieving what needs to be achieved.

"For example, considering that a quick entry or exit to a vehicle is easier when people aren't strapped into seat belts."

He added, "Also, what is significant about this event or situation? Is an individual's look and appearance important? And also an individual's choice. Protection is a very unique area of policing and there are a lot grey areas, but you are always judging each situation to weigh up the risks and threats with the outcomes you are trying to achieve."

popular
Ireland to be swarmed with freezing weather in the minus figures next week
Rob Kearney and Jess Redden arrive at wedding venue ahead of big day today
Stacey Solomon mortified after walking around shop in see through leggings
Here are the new restrictions being considered for Christmas
These are the most popular baby names for 2021
8 gorgeous Irish Christmas markets you need to visit this winter
Irish man in his 20s dies after being kicked by a horse
You may also like
3 weeks ago
Bear Grylls says it was a "privilege" to feed Prince George his "first ant"
1 month ago
Review: Kristen Stewart is unflinching and unpredictable in Spencer
1 month ago
Japanese princess gives up royal title to marry college sweetheart
1 month ago
Queen Elizabeth cancels trip to Ireland based on "medical advice"
2 months ago
Princess Beatrice reveals the stunning name of her baby girl
2 months ago
Princess Beatrice has given birth to her first child with Edoardo Mapelli
Next Page