A 'sexy' Handmaid's Tale Halloween costume has been recalled due to the severe amount of backlash it received online.

The costume, sold as a 'Brave Red Maiden' outfit, appeared for sale by online retailer Yandy earlier this week.

It featured a long red cape and a white bonnet headpiece as per the popular Hulu series, The Handmaid's Tale, and a short red dress and sultry-looking model as per a sexy Halloween costume.

"An upsetting dystopian future has emerged where women no longer have a say. However, we say be bold and speak your mind in this exclusive Brave Red Maiden costume." 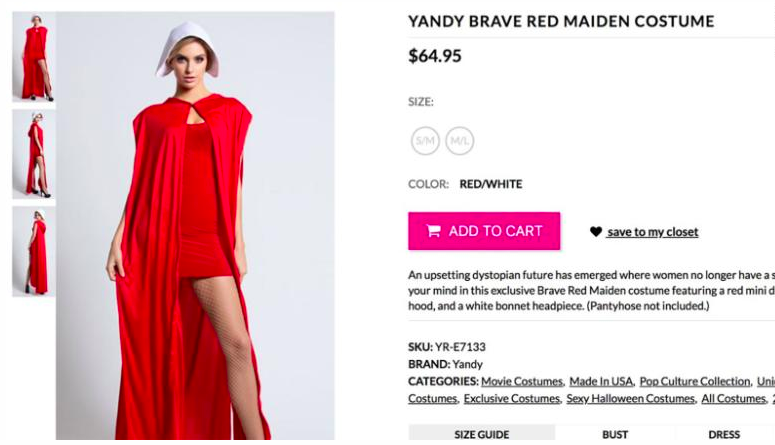 The outfit garnered a lot of criticism online due to the plot of the series itself, which follows a group of women who are dehumanised and raped, their only function being to carry children.

In the show, the women wear long red capes and white bonnet headpieces to keep their bodies and faces hidden from the public.

Many took to Twitter to express their confusion and annoyance that such a costume exists.

Yes, this is what the handmaid's tale was missing - more leg https://t.co/7A6vI7Vpnd

We're now beyond satire. "Sexy" Handmaid's Tale outfit. There's nothing like fighting the patriarchy by sexualising a show about misogyny and rape. ht @bustle pic.twitter.com/aTaAsc0Zhf

However, others thought that the costume represented exactly what The Handmaid's Tale was trying to portray - that women will always be sexualised by men even when wearing a long red cloak with a bonnet.

These people were mercilessly shouted down by the other people who found the costume offensive, however, eventually leading to Yandy removing the product from their website and issuing a statement.

"Over the last few hours, it has become obvious that our 'Yandy Brave Red Maiden Costume' is being seen as a symbol of women's oppression, rather than an expression of women's empowerment.

"This is unfortunate, as it was not our intention on any level.

"Our initial inspiration to create the piece was through witnessing its use in recent months as a powerful protest image."

popular
Paul Mescal wore O'Neill's shorts while carrying cans of pink gin so I bought O'Neill's shorts and cans of pink gin
Women and girls struggling with access to period products during #Covid-19, research shows
This amazing hanging egg chair is coming into Aldi next week and go, go go (but safely)!
5 reasons why we need more videos of Doireann Garrihy's new puppy immediately
Her Quarantine Quiz Week 9: Iconic Irish music videos
"What a gent": Matt Damon signs Irish artist's drawing in aid of Pieta House
After days of silence, Scott and Sofia finally comment on the break up rumours
You may also like
6 months ago
'Come on, it’s 2019' Molly-Mae Hague is getting slammed for her Halloween costume
6 months ago
Met Eireann give weather update for Halloween night and it's not looking good
7 months ago
Rocks thrown at Dublin Fire Brigade as they tried to extinguish bonfire
7 months ago
10 amazing (but scary) mummy cakes your Halloween needs
7 months ago
QUIZ: Can you guess the horror movie from just a single image?
7 months ago
Hocus Pocus fans rejoice! A sequel is now officially being developed
Next Page