Shifty First Dates - The Her.ie Guide To Dating in Ireland: Revenge Is Best Served In A Casserole Dish

In a new weekly feature, Her.ie goes behind enemy lines to see what it's really like to be single in Ireland.

From speed dating to making speedy escapes, our no-holds-barred blog will follow one girl's attempts to venture into the dating jungle, play the field and share any wisdom that she finds along the way!

END_OF_DOCUMENT_TOKEN_TO_BE_REPLACED

Week Three: Revenge Is Best Served In A Casserole Dish

After a few weeks of random matches, conversations and coming up with excuses, I finally threw caution to the wind and went on my first Tinder date. As we discussed last week, I don't find initial dates all that enjoyable due to a colossal dose of stage fright. Luckily, on the night of my date, I had to work late, thus giving me no time to come up with worse case scenarios and eliminating the whole 'what do I wear?' meltdown.

I always like to be the first to arrive for a date because it gives you time to get a drink, find a seat and you don't have to deal with the concern of not recognising someone from their profile photo. However, the first pangs of panic hit me when I arrived at the bar to find it absolutely packed to the rafters. Throwing aside my usual strategy, I took the opportunity to touch up the hair and make-up and grabbed a glass of wine before texting the man in question to see where he was.

END_OF_DOCUMENT_TOKEN_TO_BE_REPLACED

A minute later, he arrived behind me at the bar and I was relieved and pleasantly surprised to discover that he was a) just as cute as i'd hoped, b) seemingly friendly and c) did not appear to be concealing an axe or any other instrument that could lead to my fatal demise.

For a second, it looked as if we were going to have to awkwardly huddle in a corner (and I thanked the heavens that i'd worn flats) but luckily, we managed to find a cosy seat in the corner before beginning the interrogation, sorry, date.

First dates are funny things, as both people are on their best behaviour and the pressure is on to appear as some gorgeous, articulate, intelligent, humourous dream woman. This can usually result in stilted conversation and a lack of any real banter.

So, I was delighted when my partner for the evening, who will henceforth be referred to as The Snowboarder as he was heading on an action holiday to Austria a few days after our meeting, dropped a few potentially offensive but hilarious jokes and accidentally knocked a pint over the table within twenty minutes of sitting down. Feeling reasonable confident that (for once!) I wasn't going to be the 'foot in mouth' candidate, I instantly relaxed and, horror of horrors, actually enjoyed myself!

END_OF_DOCUMENT_TOKEN_TO_BE_REPLACED

With the date going well and drawing to a close, it was inevitable that something would throw a spanner in the works and sure as you know it, when The Snowboarder moved in for a sneaky kiss, we discovered that a stray pair of boxer shorts and a solitary shoe had been stuffed down the side of the couch where i'd been sitting (pictured below, so you know that not even I could make up such a random dating story!). 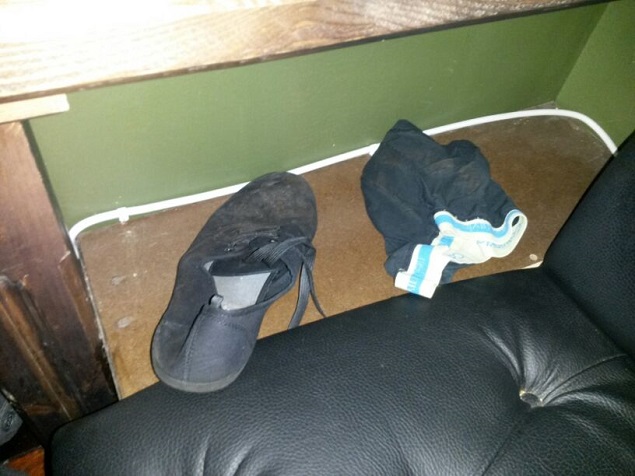 Now, a lesser man may have decided that close contact with someone else's discarded underwear could have spoiled the mood but with the determination of a young Brian O'Driscoll approaching the try line, he chanced his arm regardless and I mentally ticked off another box of the my first date checklist. Having managed to avoid assaulting me in a manner similar to an enthusiastic Golden Laborador, choking me with his tongue or giving my face a bonus exfoliation with his stubble, The Snowboarder had officially qualified as a good kisser.

With the lights coming on, it was time to leave the bar and as I managed to hail a taxi with my first attempt, I felt like I had handled the night like a pro. Unfortunately, I was quickly reminded that I am definitely more Bridget Jones than Carrie Bradshaw when I got distracted saying goodbye and managed to walk into the side of the aforementioned taxi, leaving me with a painful bruise on my leg and a severely dented ego.

He wasn't put off though and has been in regular contact since so it looks like date number two may be on the cards. Success!

Unfortunately, just as I was revelling in the afterglow of my dating adventure, a friend of mine was having an altogether different experience.

She had been seeing this guy for a few weeks, who we had dubbed The Feeder, due to his fondness for turning up at her apartment with lovingly prepared dinners. However, his eagerness after just a few dates had become a bit overwhelming and one evening, having made a loose plan to meet up, my friend was confronted with yet another guilt trip (and a Shepherd's Pie) after she was delayed in work until midnight.

Having decided that enough was enough, she cut him loose and thought that she could now happily move on with her life and return to eating takeaway Thai food at her desk at whatever time she chose. Little did she know that, in his pettiest move yet, The Feeder was about to instigate a custody battle and two weeks later, she received a direct message on Twitter saying: 'Hey, can you send me back my pie dish thingy, lads need the shepherd's pie like'.

Yes, you read that right. For The Feeder, revenge is best served in a casserole dish.

Needless to say, the prospect of carting crockery around Temple Bar didn't really appeal and the much-loved Pyrex met a untimely death on her kitchen floor. Serves him right.

Has you ever had a similarly crazy request from an ex? Leave us a comment and tell us all about it!

popular
Bride asks for divorce day after wedding following groom's disrespectful cake stunt
Has the Call Her Daddy podcast just pulled the best marketing stunt of all time?
Tributes paid following tragic death of Emma Pattison and her family
Head of dive squad searching for Nicola Bulley thinks 'something's not right'
Stacey Solomon hints at baby girl's name as due date nears
Love Island fans are calling for Ron to be dumped after accusing him of "gaslighting" Lana
Teenager killed in shark attack after swimming with dolphins in Australia
You may also like
33 minutes ago
Here is a list of every Bank Holiday in Ireland in 2023
2 weeks ago
Irish names among the top 10 hardest words for British people to pronounce
2 weeks ago
Patient in his 80s killed in Cork hospital ward following attack
2 weeks ago
Nadine Lott's killer scarred for life following prison attack
3 weeks ago
Gardaí are reviewing "helpful, new" information in Sophie Toscan du Plantier case
1 month ago
Ireland set to ban "cruel process" of conversion therapy
Next Page