The Way His Penis Hangs Reveals The Way He Thinks

We've all heard it said that men think with their penises...

Now, according to new research, men's brains are linked to their penises in some quite surprising ways. 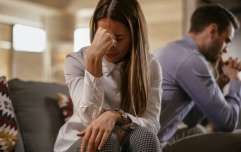 END_OF_DOCUMENT_TOKEN_TO_BE_REPLACED

The study, published in the journal of Human Reproduction suggests that the direction in which a man's flaccid penis hangs can reveal a lot about how he thinks.

Authors of the study uphold that if a man's penis hangs to the left, it suggests that they are "left-brain dominant".

Those who are more left-brained tend to be more organised and systematic that their creative and intuitive right-brained counterparts.

Other signs of left-brain dominance are a larger right foot, right handedness and other forms of body asymmetry, according to the authors.

Learn something every day!

popular
BBC apologises after calling Paul Mescal 'British' in Oscar coverage
Toddler tragically dies in Wicklow following choking accident
Stacey Solomon reveals she's having a baby girl
Adam Collard opens up on dating life since Paige Thorne split
Britney Spears asks fans to respect her privacy after police call to house
Irish women call for access to drug to treat Hyperemesis during pregnancy
Barry Keoghan dedicates Oscar nomination to his baby son
You may also like
1 year ago
Vast majority of Irish people think there is a problem with understanding sexual consent
1 year ago
Study finds husbands with controlling wives live longer and are healthier
1 year ago
Red flag: Study shows men on dating apps focus more on women younger than them
2 years ago
Sleeping with your dog in bed can actually be good for your health, shows study
2 years ago
Research confirms gender gap participation in STEM professions
2 years ago
Children with ADHD can be prescribed a special video game, says FDA
Next Page