The world of dating can be a weird one.

The world of dating apps is even weirder.

It's safe to say that anyone who is on a dating app is pretty sick of getting unsolicited messages from randomers.

The dick pics, the inappropriate texts, the aggressive messages if you turn them down.

Yep, it's a weird one indeed, but now Tinder is going to add a new feature in the hopes to stop all that.

Taking a cue from Bumble, Tinder is introducing a feature that will allow only women to message men if they're interested.

But the best thing? You can choose to turn it on or off, so it's all up to you. 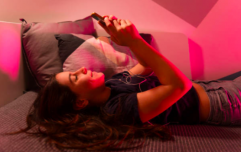 END_OF_DOCUMENT_TOKEN_TO_BE_REPLACED

Mandy Ginsberg, the chief executive of Match Group Inc, the company that owns Tinder told Market Watch: "Often, women don't really want the pressure of kicking off the conversation, but if they want it, that's great.

"Giving people the choice versus telling people how to engage is the big difference.

"We have to constantly listen to what women want and address their needs, not just on Tinder but on all products."

At least we get to choose what we want to do now.

popular
Paul Mescal didn't win an Emmy and that's okay
"Winter like" weather on the way for Ireland this week
5 Netflix releases to keep an eye out for in October
There's a Friends makeup collection coming, featuring Phoebe, Monica, and Rachel palettes
QUIZ: How well do you remember the first episode of Gilmore Girls?
Selling Sunset's Chrishell Stause reveals "the brokerage has split"
The sentimental engagement ring trend you're going to see a lot of for the rest of this year
You may also like
4 months ago
10 virtual date ideas for the person you just matched with
5 months ago
Author Penelope Winters on love, hope and Finding a Guy Like Gilbert
5 months ago
Dating in lockdown: Finding new ways to connect when you physically can't
5 months ago
Can #SocialDistance dating work? We asked a relationship expert for the lowdown on how singles can still make connections during the crisis
7 months ago
Study shows it takes men four months of dating before they’re happy to share food with their partner
7 months ago
RTÉ are looking for single city slickers to swap the big smoke for the countyside
Next Page