US President Barack Obama recently appeared on Ellen, and the two of them had a heartwarming chat about the recent advancements made in terms of LGBTQ+ rights in America.

He spoke about his pride in having made some positive changes for so many people across America during his time in office. Having worked on banning employer discrimination, achieving marriage equality and repealing Don't Ask Don't Tell, he has done more for LGBTQ+ people than any other president.

“It's one of the things I'm proudest of, because my whole political career has been based on the idea that we constantly want to include people and not exclude them. How do we bring more and more people into opportunity and success and feeling hopeful about their lives?” 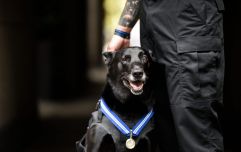 END_OF_DOCUMENT_TOKEN_TO_BE_REPLACED

However, Obama also praised Ellen for coming out in 1997, crediting her for making it easier for others to follow:“You being willing to claim who you were, that suddenly empowers other people,” the president said. “And then suddenly, it's your brother, it's your uncle, it's your best friend, it's your coworkers. And then attitudes shift.  And the law is followed, but it started with folks like you. I'm so proud of you.”

Ellen responded in a typical way with: “Well, thank you,” she said. “I’m not really gay.", and Obama replied “But, on TV, you play one and it's great”.

Watch the video below:

Image and Video via ellentube

popular
Bride asks for divorce day after wedding following groom's disrespectful cake stunt
Molly Mae shuts down backlash over her baby girl's name
Emma Pattison made distressed call to her sister before murder-suicide
Expert team end search for Nicola Bulley declaring she’s not in the water
Madonna calls out "ageism and misogyny" following Grammys appearance
Brother and sister abducted in March 2022 have been found alive
Here's why Nicola Peltz-Beckham's family are suing her wedding planners
You may also like
7 months ago
What celebrities have said about Roe v Wade's overturning in America
1 year ago
"Our best friend and loyal companion" – Barack and Michelle Obama's dog, Bo, has died
2 years ago
Barack Obama says he "screwed up" not giving Dolly Parton a Presidential Medal of Freedom
3 years ago
Barack Obama just wished Michelle a happy birthday with the CUTEST Instagram post
3 years ago
Michelle Obama has shared a family photo for Thanksgiving, and we hardly recognise Malia and Sasha
3 years ago
Here are all the brilliant books on Barack Obama's summer 2019 reading list
Next Page