2016 was the year everything went to shit, except Twitter.

You can always rely on Twitter to cheer you up with dank memes, fake stuff and sick wordplay when times get tough. 2016 was so unbearably awful, but at least we were able to seek comfort with gay abandon on Twitter.

Here's 100 of the funniest tweets you might've missed this year (in chronological order because organised fun is the best kind of fun).

strippers who dress up as police and don't say "FREEZE! L.A.P.D...a.n.c.e" don't deserve their jobs

Please be the guy on the right x pic.twitter.com/jnRkvqIyZ5

Wait a minute, Kanye WAS saying she's a Gold Digger!

New favourite game = finding Americans on Facebook that have no idea they are Corrie characters pic.twitter.com/Z1DWkXudoq

This must look like the plot to a fantasy adventure movie to non-Irish people pic.twitter.com/BmlQo8ei7U

Being alone on pancake day is far worse than being alone on Valentine's day because nothing is sadder than flipping a pancake in silence.

"We can't put it off any longer Alan, our daughter needs new shoes"

CENTIPEDE DAD: [staring out the window] This is gonna bankrupt us Susan

Needless to say, I don't think it's good news. pic.twitter.com/LuGppvSycJ

#WorldBookDay
Forgot they had to be in costume, so they're going to school as pages 89 & 165 of the Argos catalogue pic.twitter.com/5JHnHlRbte

Manic Street Preachers tried to warn us, but we didn't listen... pic.twitter.com/rmQmSLP4Fz

why does this read like Stephen Gately somehow mysteriously killed a child with his jacket pic.twitter.com/VEegLWFy3O

who painted this you made me fuck up my car pic.twitter.com/E1qG0c0eDi 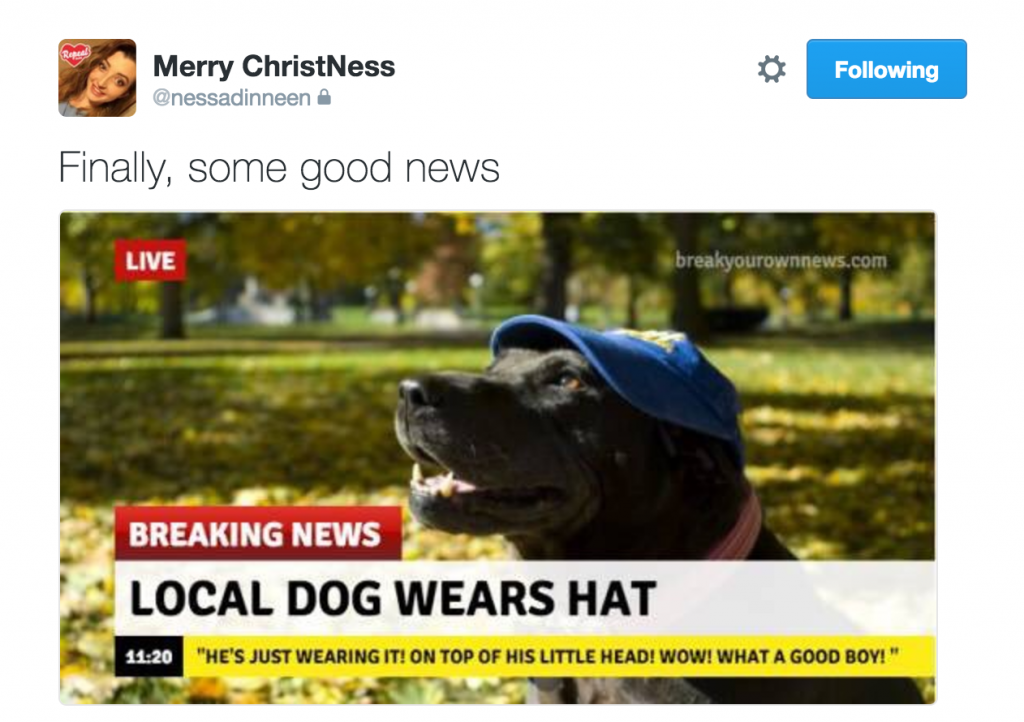 When you haven't drank in a few days and you're seriously proud pic.twitter.com/hjFniYAHIZ

She truly is the world's greatest athlete pic.twitter.com/bYpqw8OmD0

all text and images shift. 4 new pages appear. in the distance, sirens.

I want a kiss cam at my funeral

I assume this was the last of the Famous Five books. pic.twitter.com/WaRpAPKXXL

I'd like to meet the person who ticks the last one. pic.twitter.com/0FUTuJffxW

this is my university everyone ???????? pic.twitter.com/5wxdBRfDTB

Happiness, ranked:
3. Graduation
2. Birth of first child
1. Woman you admire tells you, unsolicited, that you nailed your winged eyeliner

Tom Hardy always looks like he's charging his phone across the room and he just saw someone almost touch it pic.twitter.com/2lIIGEh1dZ

It doesn't matter how old you get, buying snacks for a road trip should always look like an unsupervised 9-year-old was given $100.

Very lifelike, but I wonder how well he'll sell pic.twitter.com/4Ip9xzkVr2

Waiter: Sir that was the entire block of cheese

Me: *leans in way too close* Go get another

are you even a girl if you don't tell people you're wearing jeans and a nice top ????

You (hasn't seen Ratatouille): gross get this rat outta here

Me (smart, has seen Ratatouille): now wait just a minute

Your apologies mean little to us Shrek fans, we are strong and resilient pic.twitter.com/OIjAAx4IcZ

i paid for in-flight wifi so i could tweet this immediately pic.twitter.com/nnwpcyYC8V

Harry Potter and the pic.twitter.com/8rdW5YL6tf

And the award for best "Friends" extra goes to woman who sips coffee then chews it. pic.twitter.com/LQtycvoS9w

Nothing quite says "Chinese, xfactor, missionary for 10 minutes then bed" quite like a couple going to a Kodaline gig together

be the change you want to see in the world pic.twitter.com/x5CjWXJgHz

Me making new life plans every time I have a hangover pic.twitter.com/qEuAX6noqL

God *giggling*: They are gonna be so tiny.

God *suddenly tearing up*: but omg so strong.

This cigarette packet started singing Fairytale of New York at me? pic.twitter.com/Uza82pT7tY

my dad has just taken dad jokes to a whole new level pic.twitter.com/S7pklb4EhX

Still everything to play for, in the Men's Hoovering #Rio2016 pic.twitter.com/L1JwxBk4u8

*gymnast does a triple-double ultra-spin backflip-frontflip but takes a tiny step when she lands*
ME: [mouthful of Pringles] what a loser

Adele got a billboard just to gloat pic.twitter.com/8lVUhy2rm1

When your ex comes to your Olympic meet. #Rio2016 pic.twitter.com/T3igVFsp4Y

wife: Why is your back all scratched up?
[flashback to me chasing a raccoon after she told me to leave it alone]
me: I'm having an affair

Jobs: You Need To Have Your BA
*got BA
Jobs: you need 5yrs experience
*5years later
Jobs: You need a MA
*Got MA
Jobs: we need some1 young

Their bravery will not be forgotten pic.twitter.com/mRUNeim9WI

The boom is back pic.twitter.com/XNPN3iILSo

oh no why did I bring my bird to see sully

Nobody at the Women's Weekly has noticed that their automatic tweet program "Adobe® Social" has stopped including links to their stories pic.twitter.com/Bf6cLg2f3o

My cousin went swimming with dolphins the other day and let's just say it could have gone better. ?? pic.twitter.com/i10P8xCBWs

for someone who didn't start a fire, Billy Joel sure is defensive about it

I am in no position to judge Trump on this. I, too, made poor investment decisions in 1995. pic.twitter.com/9BZcq3f4JG

frank underwood: (to camera) the rice is irrelevant. but for now i'll play his game.

Did you know Sia's last name is Wouldntwannabia?

Right it's getting closer tae Halloween and a have no idea how 2 beat last years Chucky.. Ar La pic.twitter.com/GxOde9Un3M

AMAZING! This guy took a photo of himself every day for two days: pic.twitter.com/GRPcyzWHLo

we wrote our own wedding vows pic.twitter.com/Vi5nnpte1f

fuckinghell they're letting every Tom Dick Ann harry on the chase these days pic.twitter.com/y0wnro0PUs

when u sit down and look at your stomach pic.twitter.com/hsWDIbLjbR

If you're having a bad day just remember @TheNotoriousMMA cropped me out of our photo pic.twitter.com/KIvyUGGM9Y

OOH BABY DO YOU KNOW WHAT THAT'S WORTH pic.twitter.com/KtGBBOw6kI

My dad looks like he just got a letter pic.twitter.com/m5IDHRzrem

*listens to Mr. Brightside once* pic.twitter.com/4gNSitoIoJ

No, he hasn't - I've just looked at a map and it's still there pic.twitter.com/ibFTF1afxW

get this for ur nanny for christmas it's in forever 21 rn pic.twitter.com/UrTXM6oB5Z

pull the plug on 2016 pic.twitter.com/WGKAJHozA6

This advent calendar is shit. There's no chocolate and it just makes me cry all the time. pic.twitter.com/iZDYRl20Qt

Hollister models always look like they're about to fuck up a pitch on The Apprentice. pic.twitter.com/XhcexH9QPO

popular
Paige Thorne breaks her silence on Jacques O'Neill drama
Top tips for keeping your fake tan on for longer as the weather heats up
Love Island producers respond to claims Jacques was kicked off the show for "bullying"
Apparently, THIS is the reason why Louise Redknapp split from Jamie Redknapp
Met Éireann extends high temperature warning for Ireland this weekend
Ekin-Su Cülcüloğlu signs the biggest fashion deal in Love Island history
Survey reveals the sexual positions women hate most
You may also like
2 months ago
WATCH: People are losing it over clip of Kendall Jenner trying to climb stairs at Kourtney's wedding
3 months ago
Hilarious moment Irish Rail passenger spots "collapsed man" on platform
9 months ago
You's Penn Badgley and Cardi B are fangirling over each other on Twitter
10 months ago
Bride receives bouquet of chicken nuggets from best friend on wedding day
10 months ago
These newlyweds wore tracksuits to their reception
1 year ago
Tom Daley went viral for knitting at the Olympics - and it's all for charity
Next Page