It helps you get from place to place without having to be near any disgusting muggles on public transport.

There's a secret world that exists between car drivers, much like the one between bus drivers when they go past each other and give a cheeky wave and a flash of the lights. We can communicate so much by doing so little. A simple hand movement gets across more feelings than a Shakespeare soliloquy. 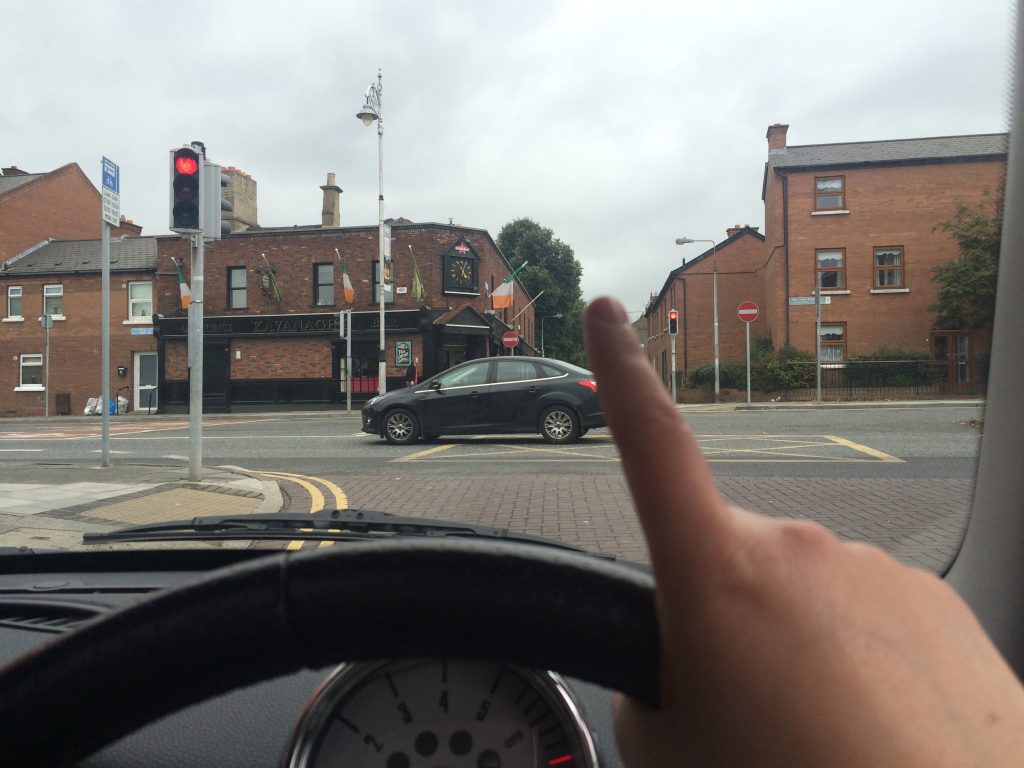 END_OF_DOCUMENT_TOKEN_TO_BE_REPLACED

This is the standard one finger salute. It's used by all learner drivers in conjunction with a death grip on the steering wheel, so as to maintain control. It is also used by motorists that don't particularly like or care for who they are acknowledging, and it's the main form of communication used by all motorists 'down the country'. 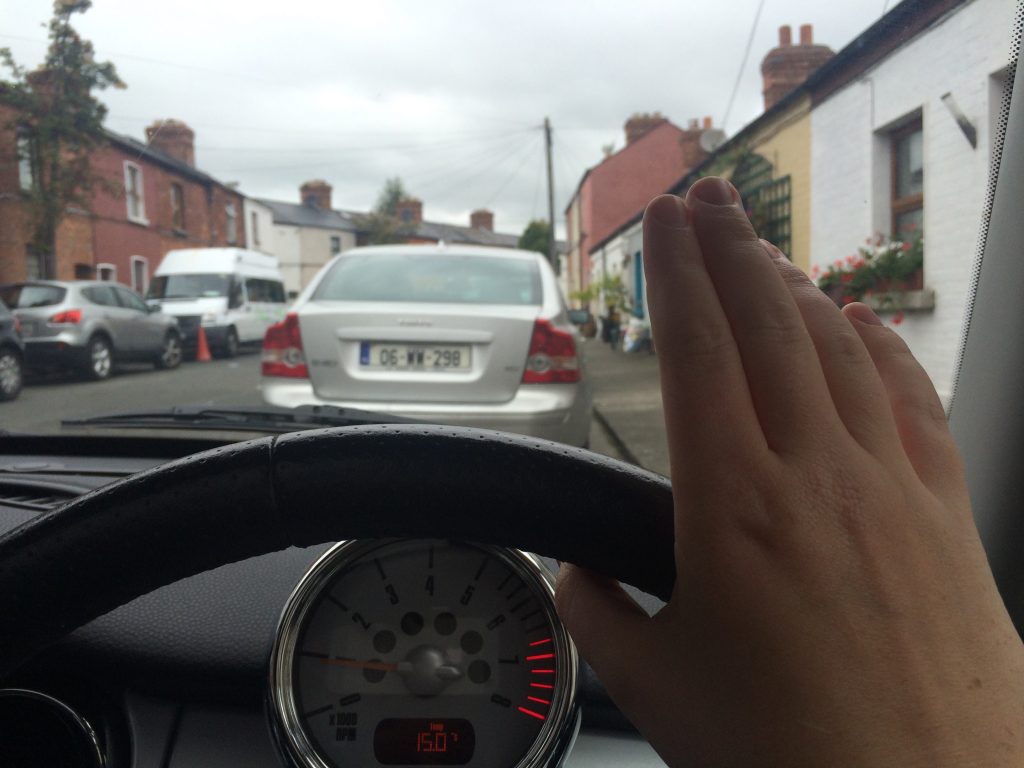 END_OF_DOCUMENT_TOKEN_TO_BE_REPLACED

This is a slightly more enthusiastic wave, most commonly used when a decent soul kindly allows you out into a line of traffic. It is usually accompanied by a smile and mouthing the words 'thank you'. It's efficient and very, very effective. 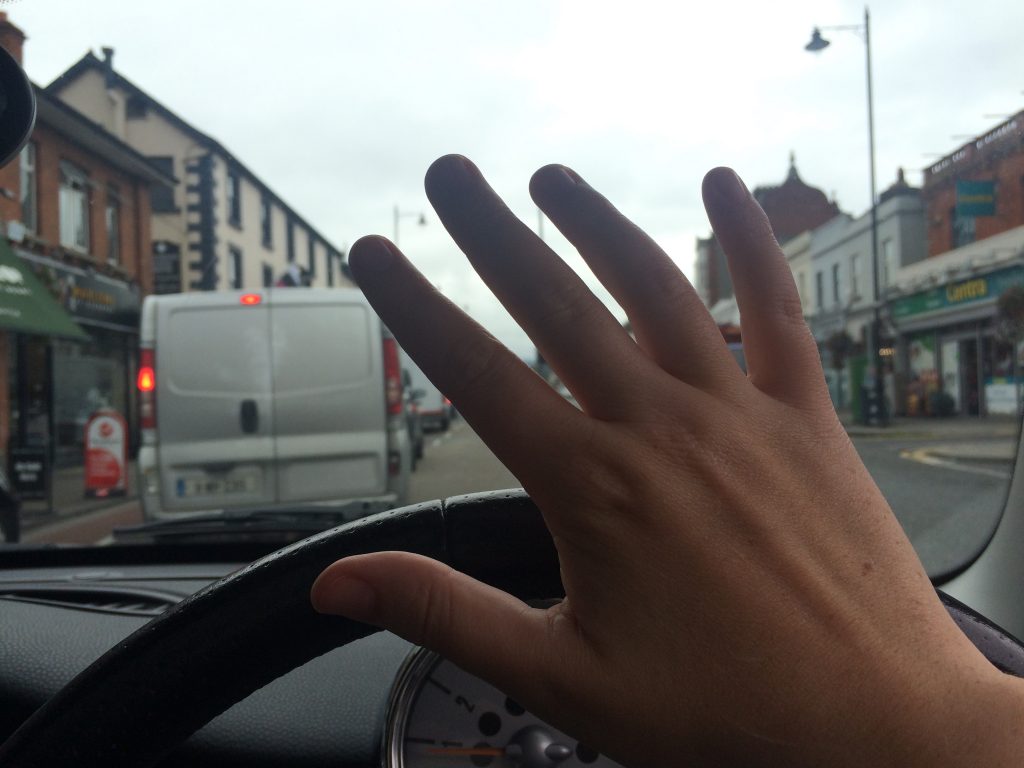 The rarest of waves, this is the utmost symbol of appreciation. Perhaps another driver has just handed you a cheque for €500, or simply allowed you to perform a tricky manoeuvre at the expense of their time. This wave is also used when you pass one of the girls on the road, accompanied by flashing lights and a very excited expression. 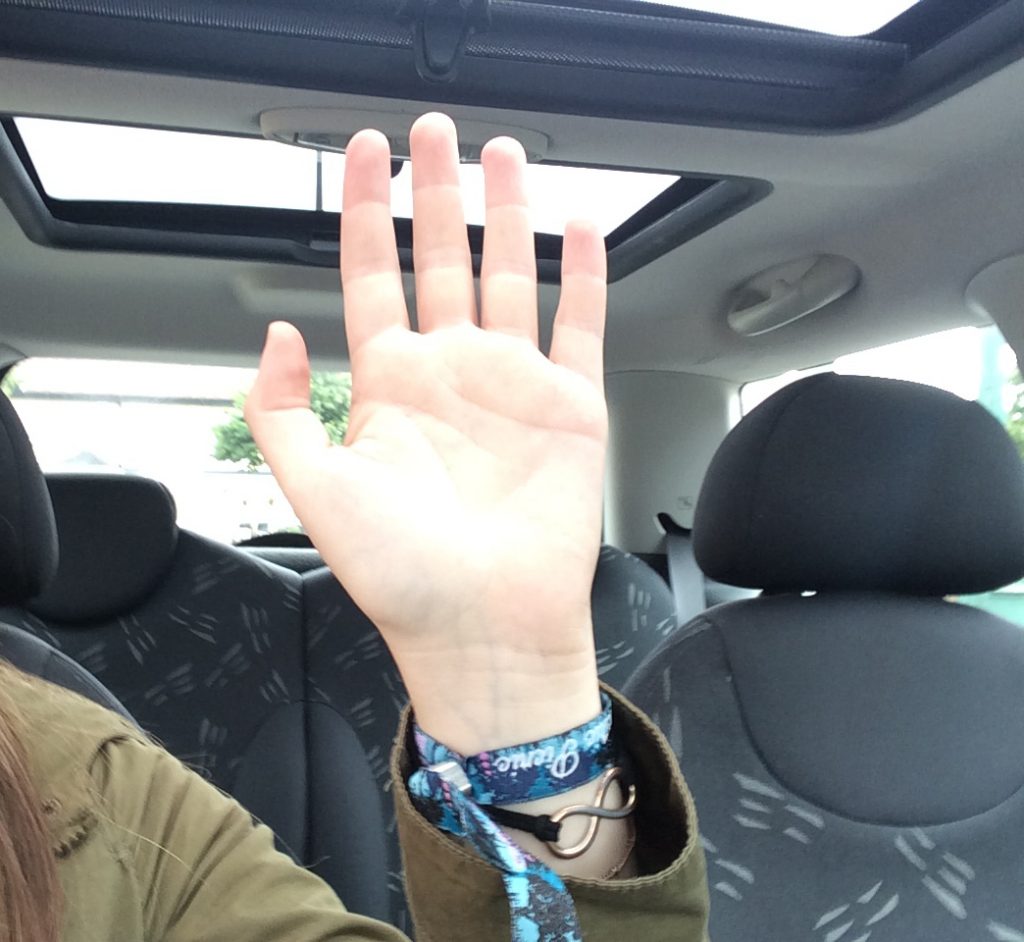 The driver behind has done something sound and you need to acknowledge that. Perhaps they allowed you out into traffic after seeing that you still have your Electric Picnic wristband on, you big legend. You perform a big dramatic hand raise, good and high into the middle so they can see it, then you glare into your rearview mirror waiting for them to flash their lights in acknowledgement of your acknowledgement. 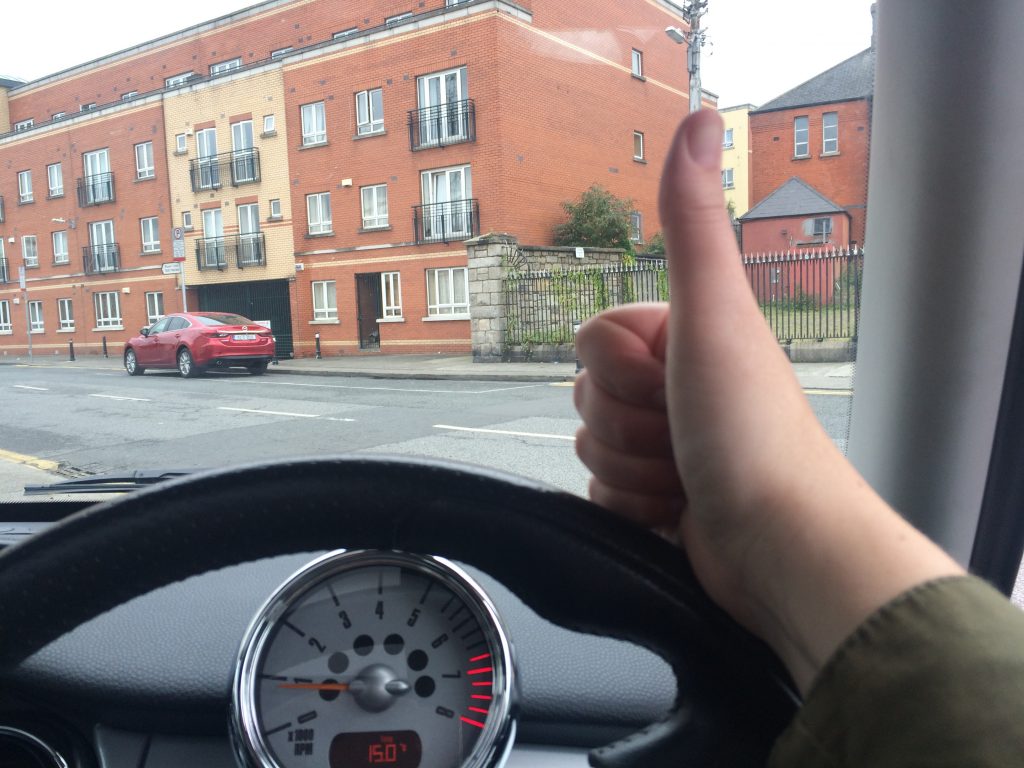 If you're on the receiving end of an 'OMG THANK YOU', chances are you'll struggle to figure out how to acknowledge your praise. Sure, you can flash your headlights, but it feels quite impersonal. That's where the thumbs up comes in handy. It allows the other driver to be aware that you've seen their thanks, accepted it and do not regret your decision to help them out. 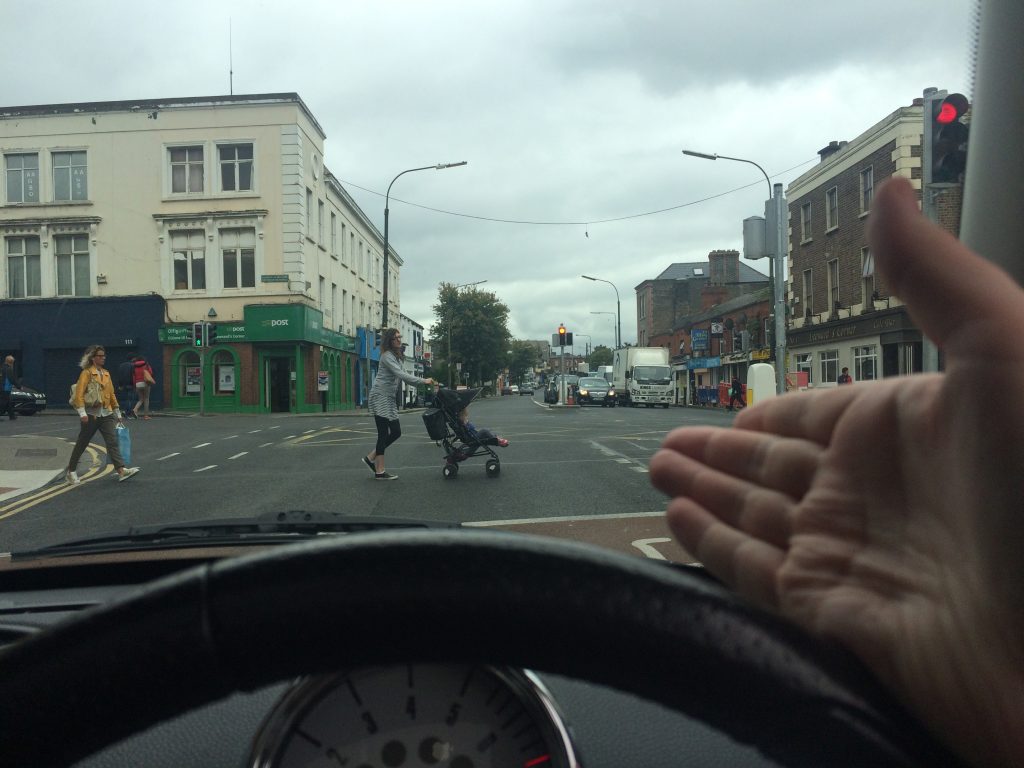 This is the most awkward of all the drivers' hand signals as you're unsure what way to position your hand over the steering wheel. Ultimately, it ends up looking very inelegant. Essentially, you're telling pedestrians that they can traverse the road safely at your beckon. They will likely give an 'OMG THANK YOU' wave back. 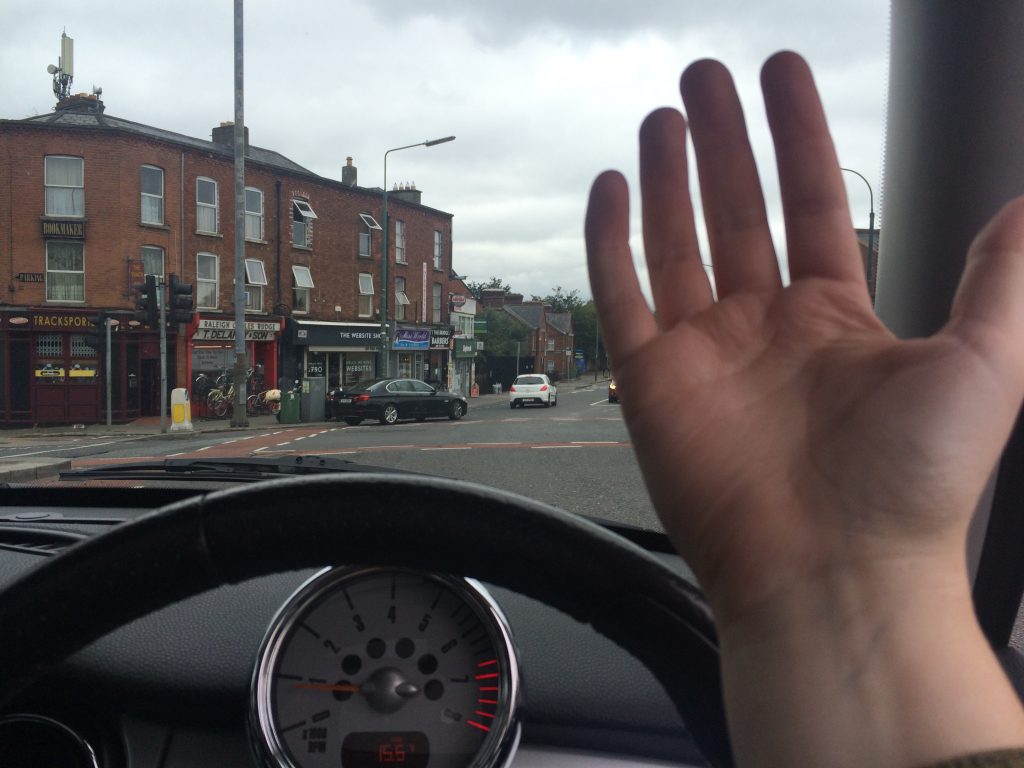 In this instance, it doesn't quite merit a honking of the horn, but you're livid and nearby motorists need to be aware of it. Some eejit has pulled out straight in front of you, potentially causing an accident. You're powerless to their stupidity, so you raise your hand in anguish. That'll show them. Moron. 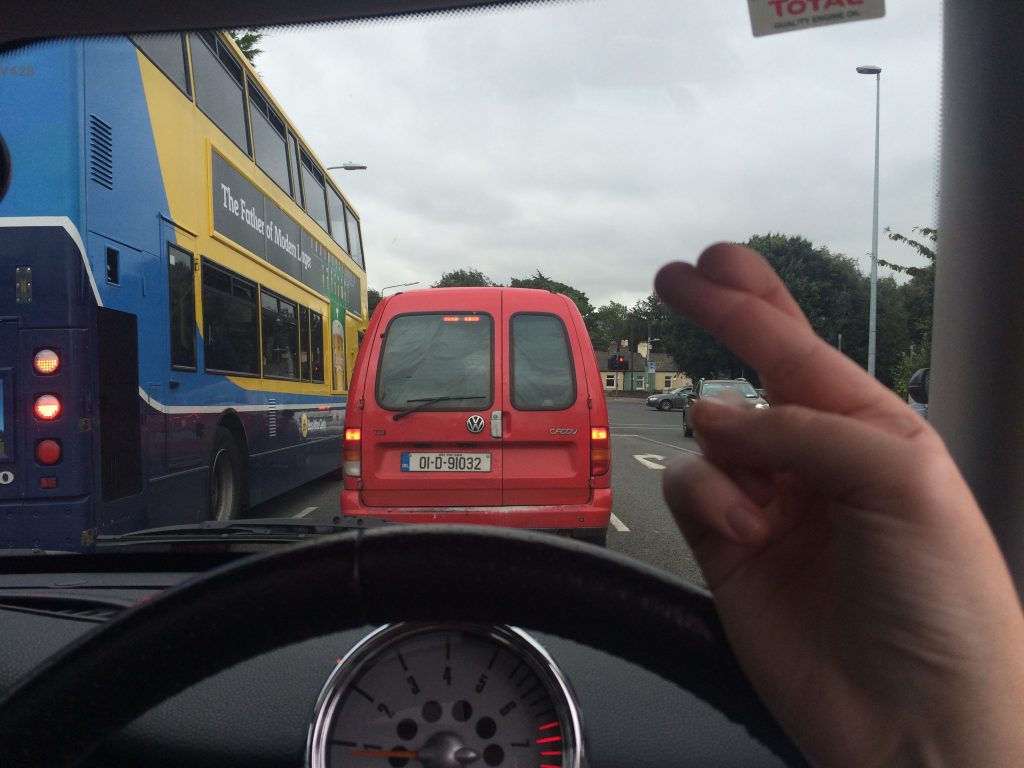 A number of reasons can lead to this gesture: You might want to make the lights up ahead, a speed van might've clocked you doing 55km in a 50km zone and you really don't want to be pulled over, or you might simply be running low on petrol. It's a cute way to summon the Gods to deliver you a very sound and pleasant future. 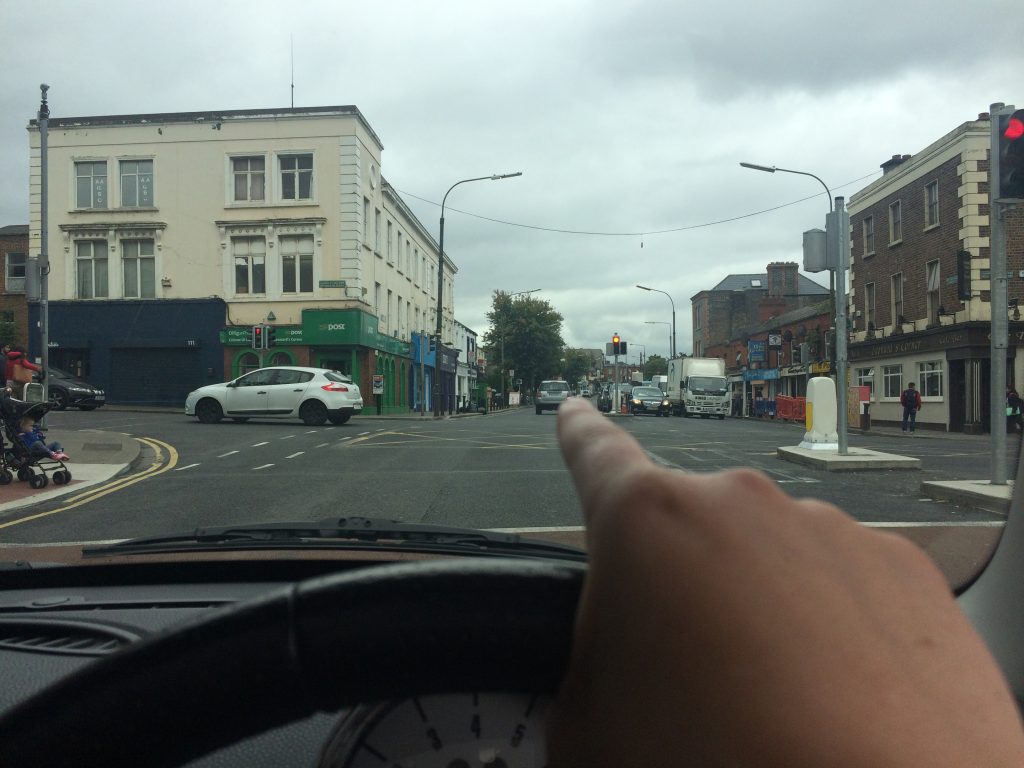 You've clocked an eejit up ahead doing something stupid and unsafe. They think they've gotten away with it, but they haven't. You boldly point at them, mostly for your own benefit, but also secretly hope they see you and wonder if you're an undercover Garda. They drive bright red Minis, don't they?! 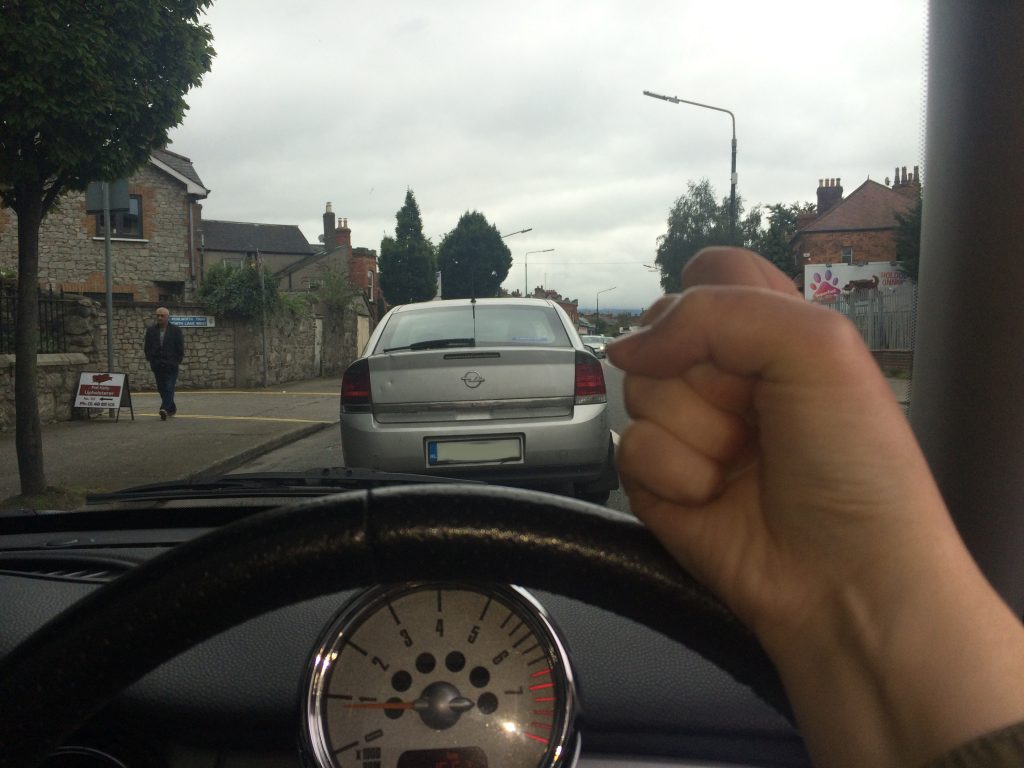 Frustration is at its peak when this hand signal is used. You're livid. Some idiot driver in front has taken their Jaysus time in moving along, so you've missed the lights AGAIN. A Sunday driver of a Tuesday, fantastic. You thump the steering wheel, but carefully so as not to set off the airbag. That'll show them! 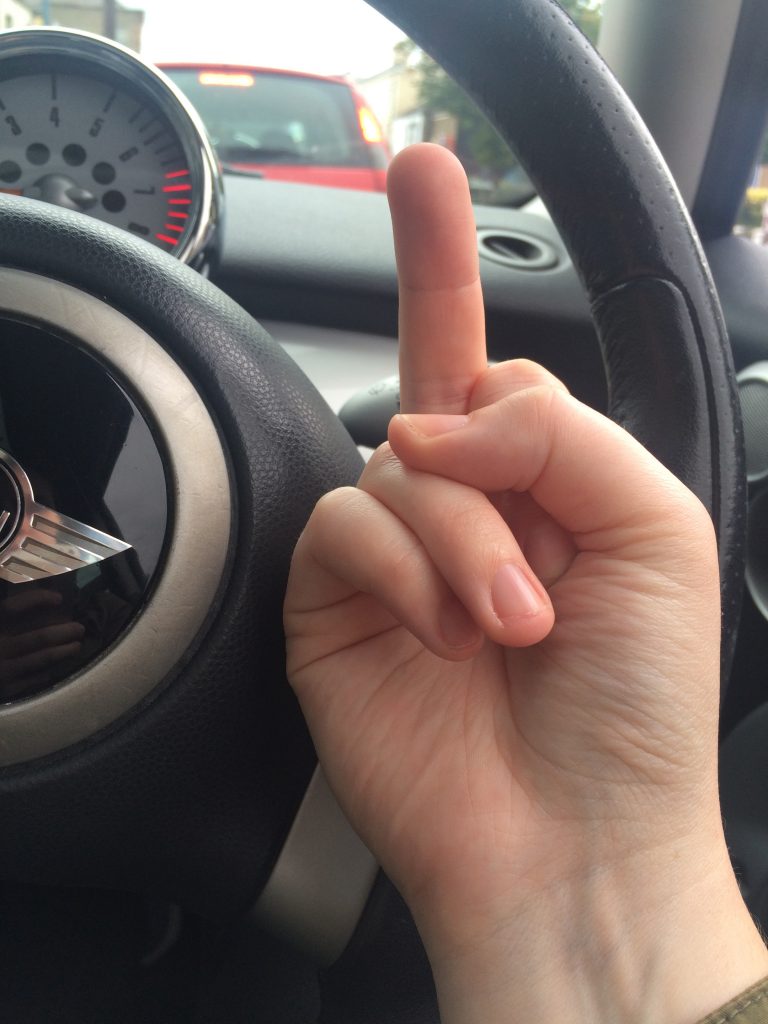 Should your 'WTF' hand movement not quite get your aggression out, you can implement the F.U. It must be hidden from the offending motorist so as to avoid any uncomfortable confrontation. It's merely a simple gesture to vent your frustrations, it means no harm and is never intended to be seen, so go easy with it.

popular
Vogue Williams slams man who refused to swap seats with her on plane
Are we getting a mini heatwave in September?
Green Party representative calls for a temporary ban of stag and hen parties in Ireland
Greg O'Shea actually left Love Island to go to his granny's funeral
Scarlett Moffatt slams 'disgusting' pap for sneaking into hotel to take photos of her
Ryanair, easyJet and BA issue warning to anyone boarding with smart bag
Katie Piper rushed to hospital for emergency eye surgery
You may also like
2 months ago
WATCH: People are losing it over clip of Kendall Jenner trying to climb stairs at Kourtney's wedding
3 months ago
Hilarious moment Irish Rail passenger spots "collapsed man" on platform
9 months ago
You's Penn Badgley and Cardi B are fangirling over each other on Twitter
10 months ago
Bride receives bouquet of chicken nuggets from best friend on wedding day
10 months ago
These newlyweds wore tracksuits to their reception
1 year ago
Tom Daley went viral for knitting at the Olympics - and it's all for charity
Next Page