Nights out are absolute gack.

The time has come. We all need to stop lying to ourselves and finally admit the truth: Going out is awful. It's a deeply unsettling event from start to finish. Our time would be much better spent sitting on our holes watching telly.

I'm not afraid to speak out and start a much-needed revolution. We need to put a stop to these deeply troubling occurrences. I am Usain Bolt and this is my 100m sprint Olympic final.

Here are 7 reasons points to prove that nights out are an enormous pain in the hoop.

1. The preparation is beyond any sane person's capabilities 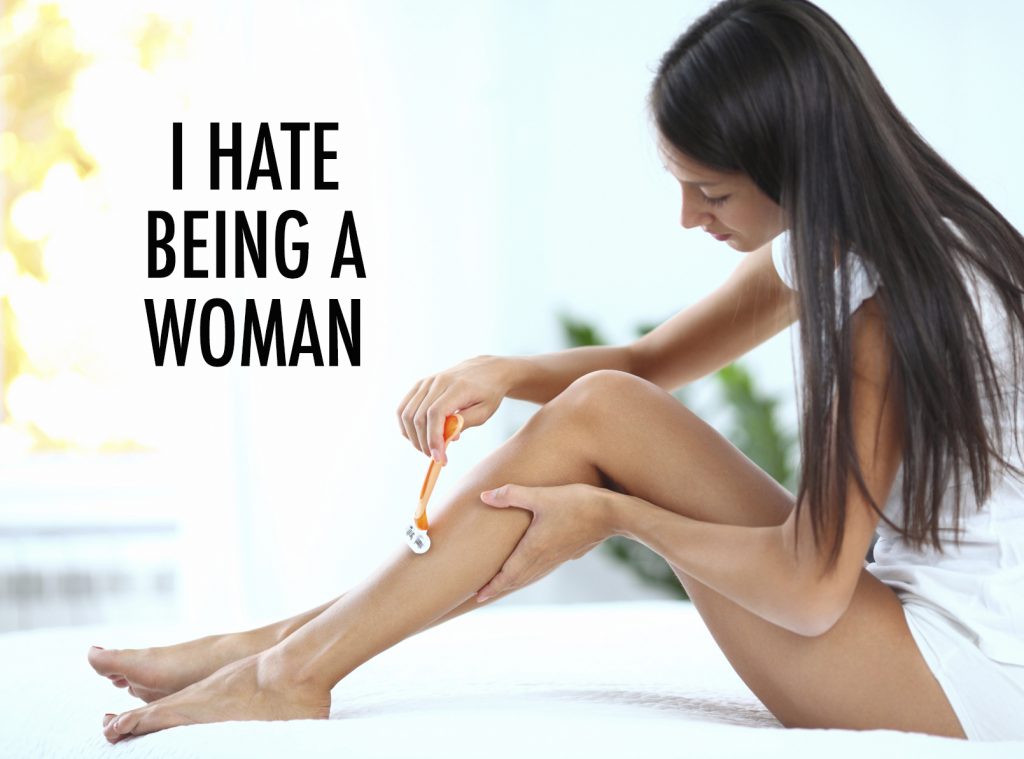 END_OF_DOCUMENT_TOKEN_TO_BE_REPLACED

Anything that requires showering and shaving your legs should be a very rare occurrence. Like Christmas. There's so much to do before a night out. Tanning, shaving, waxing, plucking, lasering (if you're a millionaire). It is a nonsense. Want to get a decent straighten on your hair? Better dry it then wait seven hours so it can 'settle' before you go anywhere near it with a tongs, you monster.

2. There are people everywhere 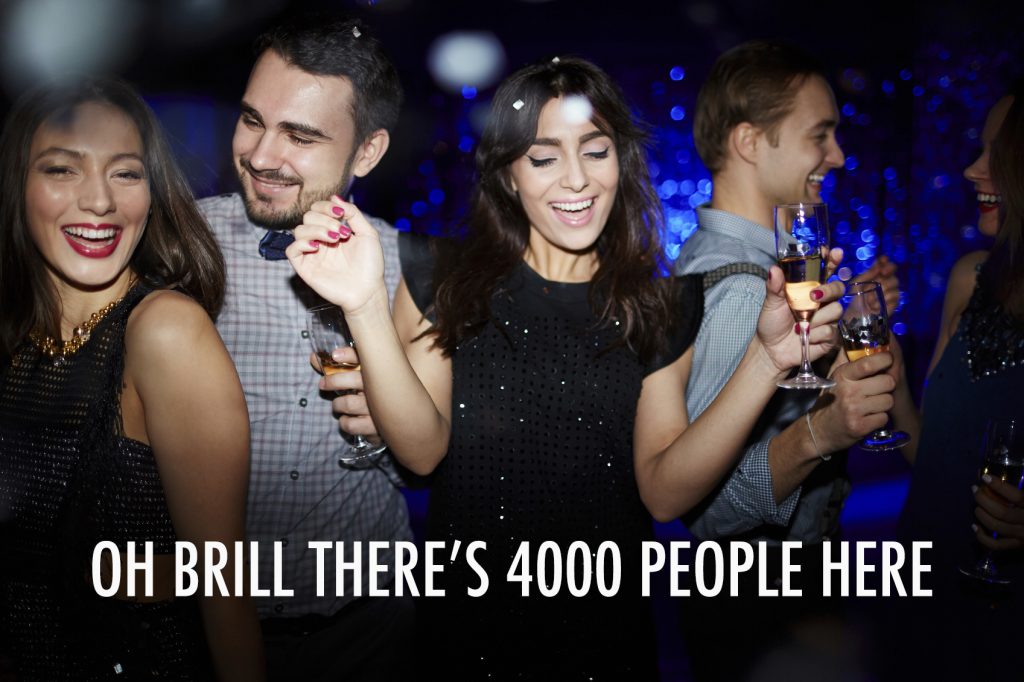 Nights out might be slightly tolerable if they didn't involve one minor thing: PEOPLE. I'm blue in the face saying it, people are the worst. They're everywhere. Standing on your toes, spilling drinks on you, trying to set you up with their pals. It is an epidemic and we need to look into controlling our population at this point. It's an absolute fact that the world would be a much better place if there was only a handful of people in it.

3. There's an awful lot of standing around involved 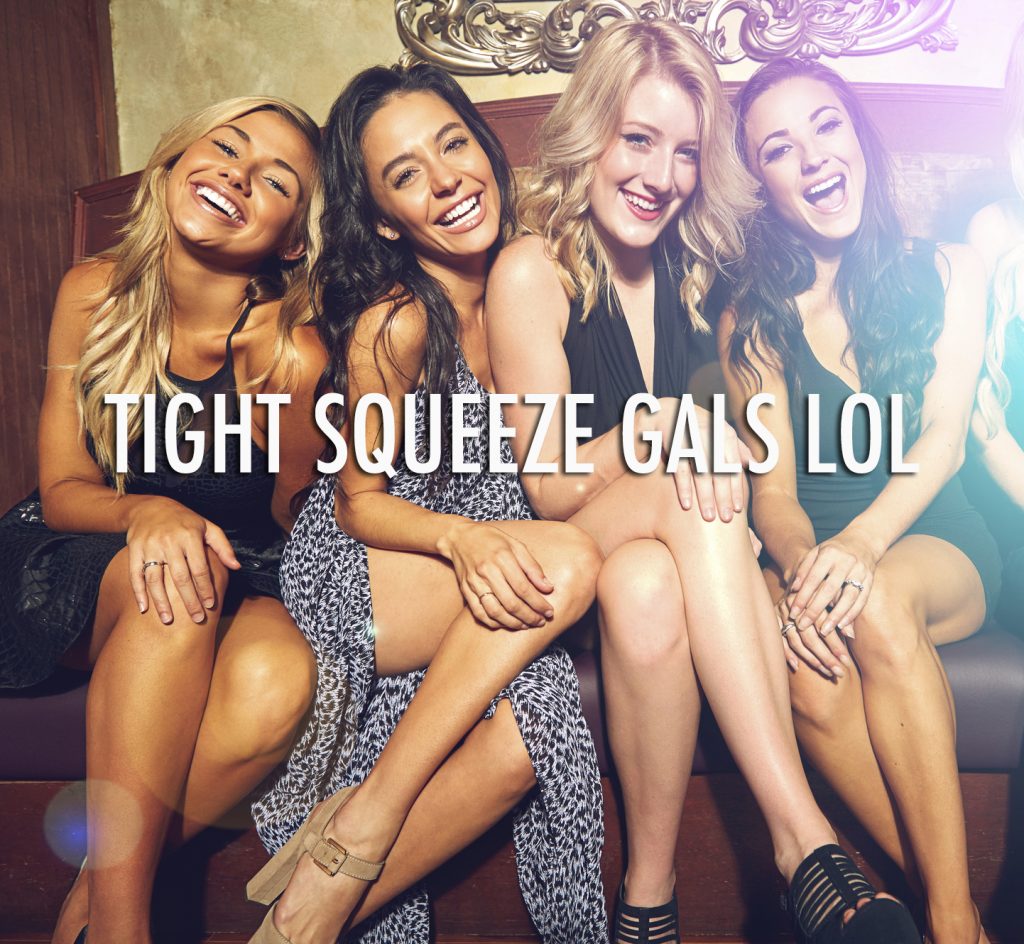 END_OF_DOCUMENT_TOKEN_TO_BE_REPLACED

God be with the days where a good sit down on a curb was all we needed to have a good time. We'd sit anywhere that the law permitted. Nights out rarely involve a good comfortable sit down. You'd be lucky to get a seat on a toilet in most clubs. If you're blessed enough to happen upon a seat, you better believe there won't be enough seats for you and all of your friends, so you're inevitably going to end up half-cheeking it on some greasy stool.

4. There's more Qs than the consonant pile on Countdown 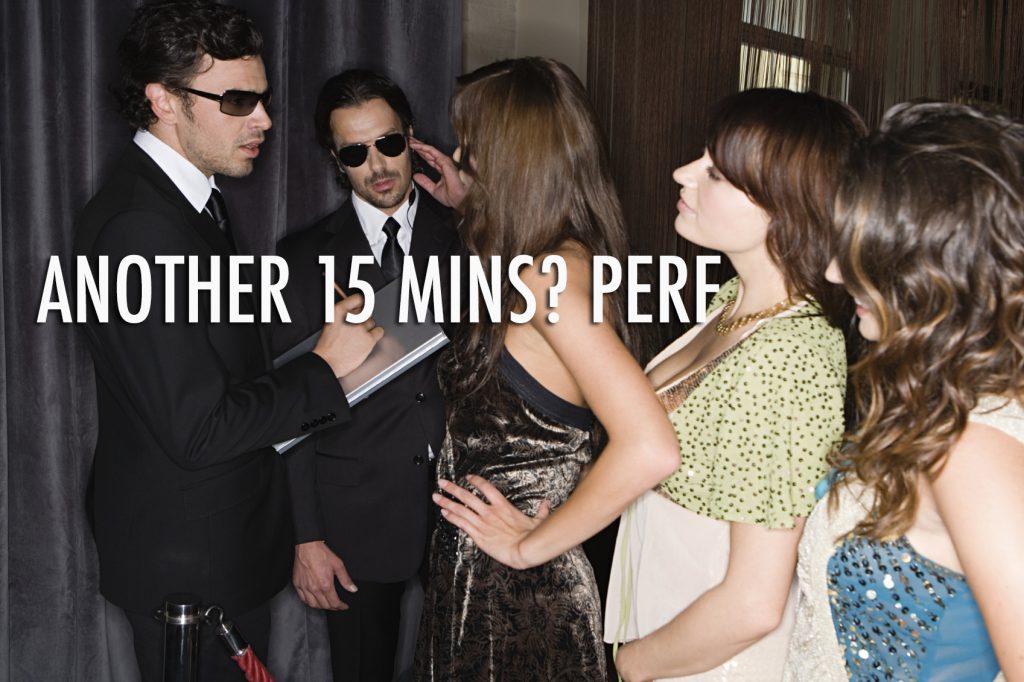 Nights out are essentially just heading out to queue up a few times, followed by heading home and sleeping your irritation away. You've to queue (usually in the pouring rain) to get inside the shitty club, then queue for the cloakroom which is a very reasonable €75 for them to lose your coat, followed by a nice twenty-minute queue for the disgusting toilets that someone has failed to treat with respect. Fancy a drink? Better join that queue for the bar sunshine, where you'd have more chance of flagging down a water salesman in the Sahara desert. 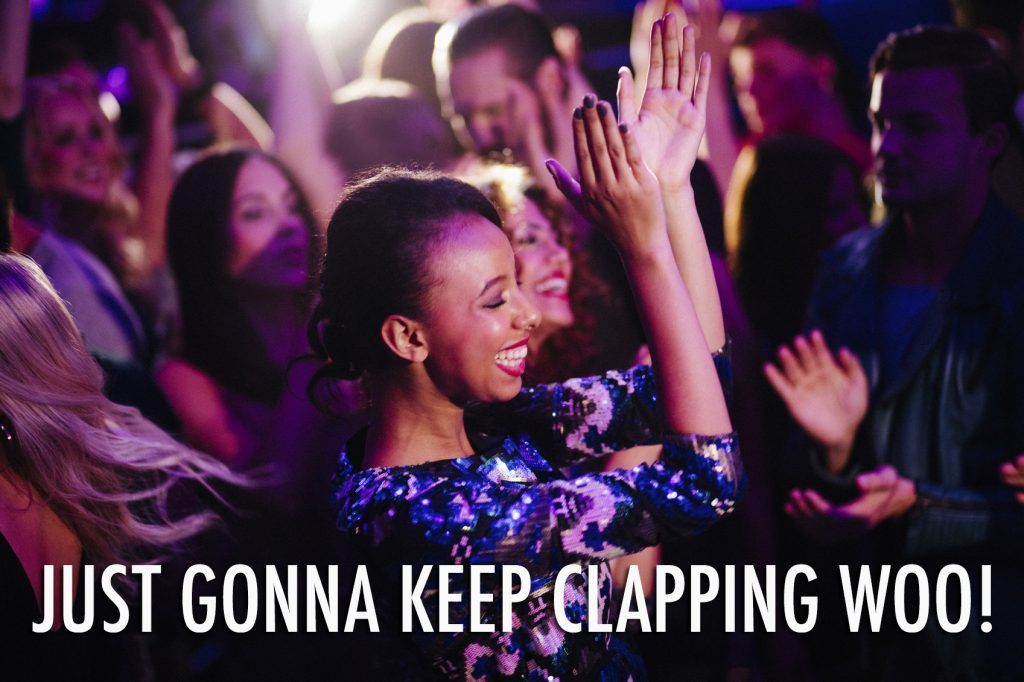 This one might just apply to me. One member of your assembly of mates always suggests that the group goes for a dance. Dancing is very awkward unless you've had 37 drinks, in which case you are Jean Butler on the hunt for your Michael Flatley. The music is usually really bad so it's not even easy to dance to, but everyone else seems to know what they're doing for some reason? They must've practiced. You are ferociously sober for this carry-on.

6. Home calls and you desperately want to answer 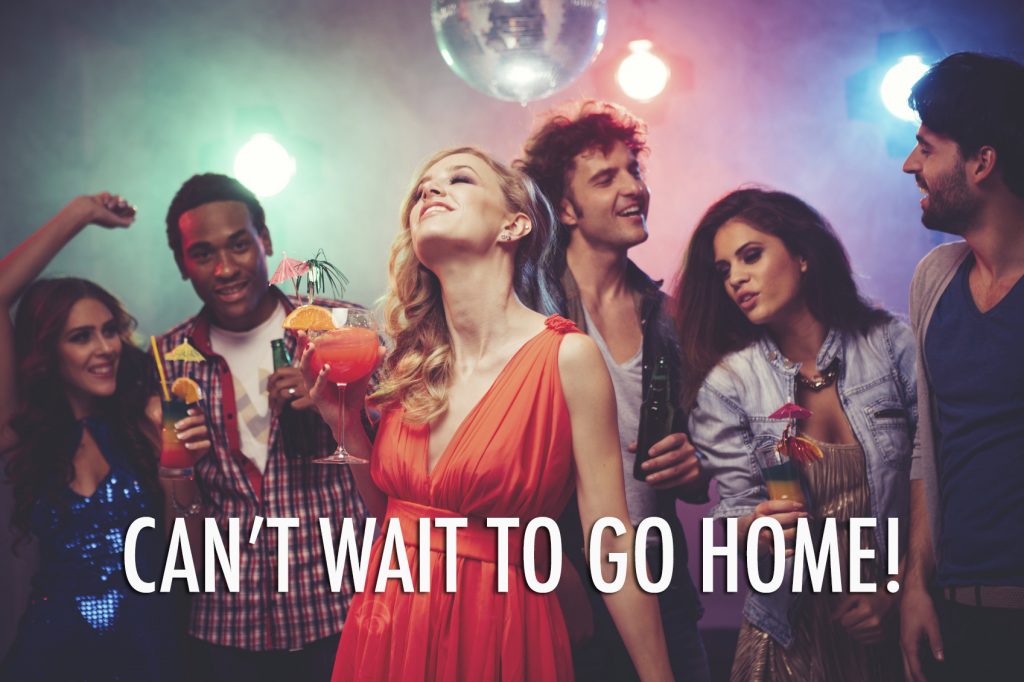 All I ever think about on a night out is getting home, or being at home. It's like home is your ex-boyfriend that you shouldn't text or think about on a night out, but you can't help it. It's warm and comfortable at home, there's Netflix and Club Milks there waiting for you. Next thing you know, one of the gals is yelling at you for yawning. Give it a break, Sinéad, some of us feel alive simply by doing a Sudoku.

7. The whole unnecessary ordeal is expensive 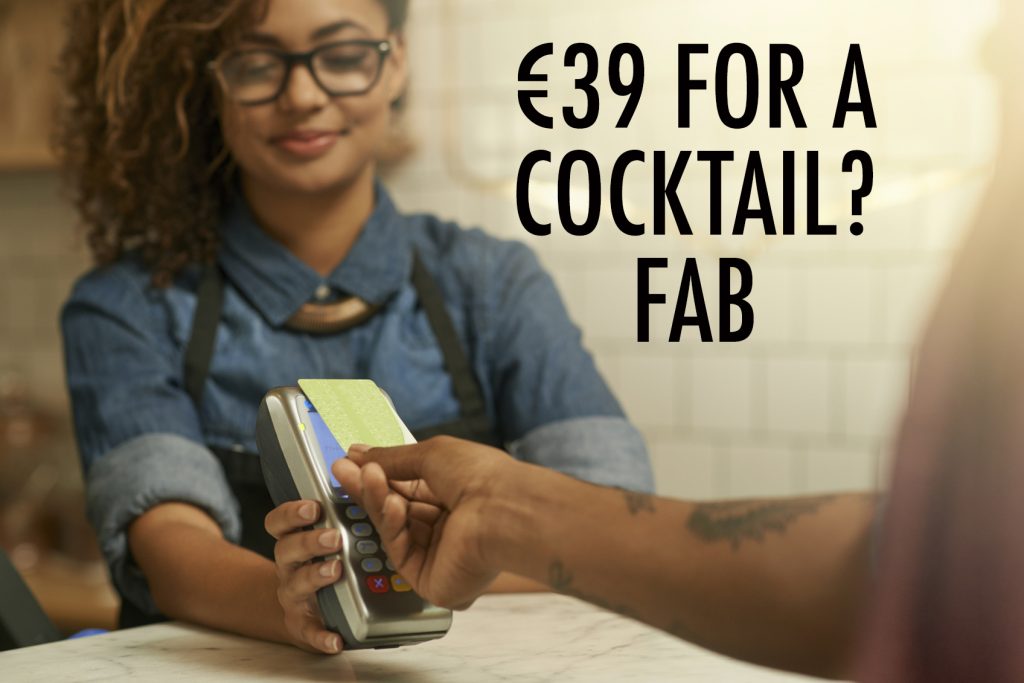 Quick reminder that everything costs money, but sometimes it's worth it. I'll spend €4.99 on a coffee but you can get a grip if you think I'm paying €2 for a spritz of perfume, thank you very much. The entire affair is a racket. Pre-drinks are extortionate, as is transport and drinks at the club. However when it comes to food after a night out, €17 for a slice of lukewarm pizza is very reasonable, thank you very much, I will take two, my good sir. No taxis available? I shall treat myself to a €40 Uber if it means I get out of this heck hole and return safely to my hermit hideout.

popular
People are being warned not to dress as Jeffrey Dahmer for Halloween
Davide Sanclimenti opens up on having kids with Ekin-Su Cülcüloğlu as he turns down Dancing On Ice
Anna Delvey is set to be released from prison
Why Are Men so Obsessed With Boobs? The Answer is Pretty Surprising...
Primark reintroduces female-only fitting rooms after two men walk in on woman
So, William and Harry have a step sister... and who knew?
Hilary Swank, 48, reveals she is pregnant, expecting twins
You may also like
4 months ago
WATCH: People are losing it over clip of Kendall Jenner trying to climb stairs at Kourtney's wedding
5 months ago
Hilarious moment Irish Rail passenger spots "collapsed man" on platform
11 months ago
You's Penn Badgley and Cardi B are fangirling over each other on Twitter
1 year ago
Bride receives bouquet of chicken nuggets from best friend on wedding day
1 year ago
These newlyweds wore tracksuits to their reception
1 year ago
Tom Daley went viral for knitting at the Olympics - and it's all for charity
Next Page