Aer Lingus and Ryanair forced to cancel flights to, from and over France due to strike action

Even if you aren't flying to or from France, your flight may still be cancelled. 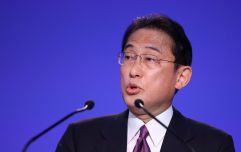 END_OF_DOCUMENT_TOKEN_TO_BE_REPLACED

Aer Lingus and Ryanair are just two of the flight carriers who have been forced to cancel flights to, from and over the country, and all passengers are asked to check the status of their flights.

The strike action is part of a nationwide walk-out in France following President Emmanuel Macron's announcement that there will be a reduction public spending, a trimming of public sector jobs, and  an overhaul of large parts of the vast French state.

As a show of solidarity, all unions representing civil servants have backed today's strike action, which will include walk-outs from all flights, rail services, schools, and some of France's energy infrastructure.

popular
14-year-old boy charged with murder of 12-year-old Ava White
The new restrictions likely to be introduced as NPHET meets with government
This year's Late Late Toy Show has broken Irish TV records
Toy Show's sign language interpreter Amanda Coogan hailed a "national treasure"
New Zealand politician cycles to the hospital one hour before giving birth
Strictly's Giovanni Pernice responds to dating rumours following split from Maura Higgins
Selling Sunset's Christine Quinn slams 'fake pregnancy' rumours
You may also like
5 days ago
New Zealand plans to reopen to tourists after 2 years
1 week ago
Her Christmas gift guide: gifts to treat your bestie to this Christmas
2 weeks ago
You can now visit a Shrek-themed Christmas grotto in London
3 weeks ago
US travel to resume for fully vaccinated
1 month ago
Weekend break? Here are the 3 best hotels in Northern Ireland right now
1 month ago
Thailand will re-open to some vaxxed tourists next month
Next Page