Warning: This content will be seen as triggering and upsetting to many.

Our thoughts are with Archie Battersbee's family.

They have been fighting so hard to keep their little boy alive, even looking to take their case to the European court of human rights (ECHR).

END_OF_DOCUMENT_TOKEN_TO_BE_REPLACED

However, according to the Daily Mail, the Battersbee family have now been told by letter how the little boy will have his life support treatment removed tomorrow, August 1st, in a procedure they today branded 'cruel and wrong'.

Barts Health NHS Trust said in the note to Archie's parents, Hollie and Paul, that 'all fluid infusions, medications, including vasopressin will be stopped' at 2pm on August 1."

The note also states that only immediate family will be allowed into the room to spend time with Archie as his treatment comes to a halt, and other family members will be banned.

The letter - which was given to MailOnline with permission of the Battersbee family - also reveals that a doctor will need to 'assess Archie regularly to confirm that the heart has stopped beating'. 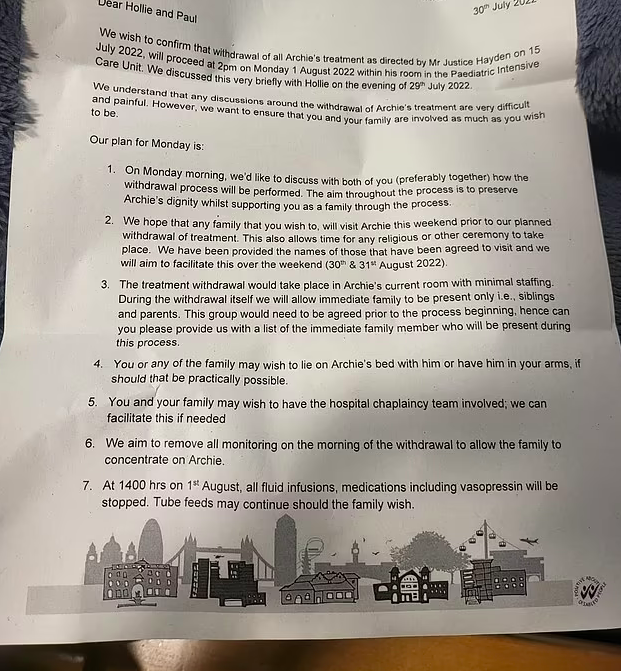 END_OF_DOCUMENT_TOKEN_TO_BE_REPLACED

The Daily Mail reveals that one of Archie's aunts had been booked on a flight to come over from Italy to see him – but will now no longer be able to under the Trust's rules.

This letter, which was sent to the Battersbee family despite the UN urging a pause on proceedings, was naturally met with devastation and anger, both from Archie's family and also many who has been following the family's fight to keep their son alive.

"The Trust has been dragging us as a family through the courts at a breakneck speed from April 27 till the final decision of the Supreme Court this Thursday evening," a statement from Hollie and Paul said: '

END_OF_DOCUMENT_TOKEN_TO_BE_REPLACED

'The Trust has never made any attempt to agree any sort of compromise with us on any matters great or small. For example this Friday, our lawyers received a letter from the Trust demanding that all videos of Archie and his medical equipment taken on the ward, which we believe is evidence of improvement in Archie’s condition (such as his attempts to breathe independently) are immediately deleted; and threatened legal proceedings for an alleged breach of data protection.

'We as a family are very disappointed that the Trust’s management has chosen to hide behind euphemisms and to mislead the public. It is hard to see any reason for that behaviour except knowing that what they are doing is cruel and wrong.'

The letter, which was sent over the weekend, also read: 'We understand that any discussions around the withdrawal of Archie's treatment are very difficult and painful.

'However, we want to ensure that you and your family are involved as much as you wish to be.'

According to the note, Archie's parents will be told on Monday morning how the withdrawal process is to be performed, with the aim to 'preserve Archie's dignity', the letter read.

It went on: 'You or any of the family may wish to lie on Archie's bed with him or have him in your arms, if that should be practically possible.'

popular
Vogue Williams slams man who refused to swap seats with her on plane
New Zealand family find two bodies in second hand suitcases
Crown Paints advert receives 200 complaints over 'misogyny' and 'everyday sexism'
Are we getting a mini heatwave in September?
Scarlett Moffatt slams 'disgusting' pap for sneaking into hotel to take photos of her
Adam Collard allegedly attacked on night out with Paige Thorne
This is why the world is obsessing over Adidas Gazelles
You may also like
1 week ago
Actress Anne Heche in coma following car crash
1 week ago
The cost-of-living crisis is having a disproportionate impact on women, charity warns
2 weeks ago
Government approves new standalone stalking offence Bill
2 weeks ago
Man involved in Lady Gaga dog-walker robbery jailed for 4 years
2 weeks ago
Shakira could face 8 years in prison over tax fraud
2 weeks ago
Parents sue Sesame Place after performers 'ignored' Black children
Next Page