It is a nation's motto and a fine one at that. The idea that the values of freedom, equality and brotherhood are at the core of a country's identity. And yet many around the world strongly feel that France is betraying its precious tenets by curbing liberty, and making someone feel very unequal indeed.

On Wednesday, photos emerged of armed French policemen surrounding a woman on a Nice beach and forcibly making her remove her swimwear. She wasn't harming anyone and she wasn't disturbing the peace. Her crime was lying on the sand with too much of her body covered up, according to the state.

END_OF_DOCUMENT_TOKEN_TO_BE_REPLACED

That's because authorities in several French towns including Nice have banned the 'burkini', a type of woman's swimwear which covers the body and head, as they perceive it to be an outward symbol of someone observing their faith. Presumably in the same way that a nun would wear a habit. 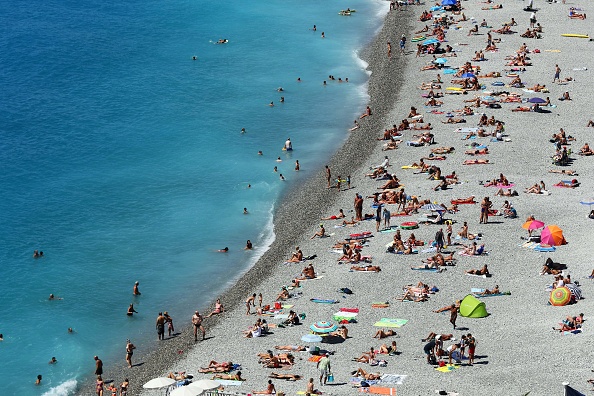 Nice's deputy mayor argues that "hiding the face or wearing a full-body costume to go to the beach is not in keeping with our ideal of social relations." The burkini does not hide the face. It covers about as much of the body as a person wearing jeans and hoodie.

Nice was of course subject to last month's horrific Bastille Day terror attack, in which a truck was used to murder 86 innocent people. It was seen as an attack on the western way of life and yet people came together from all around the world to show solidarity and support for France and its people.

END_OF_DOCUMENT_TOKEN_TO_BE_REPLACED

If the wicked perpetrators sought to chip away at the freedom of a country that prides itself on its liberty, if they were hell-bent on driving a wedge between Muslims and non-Muslims, then the seaside scenes on Wednesday will come a welcome boon. Whatever the reasons, many found it humiliating.

The woman in question is a 34-year-old mother of two. Her first name is Siam. As a witness to the scene, Mathilde Cousin, explained: "The saddest thing was that people were shouting ‘go home’, some were applauding the police...her daughter was crying."

Here are just a few of the responses to the unedifying scenes. The general sense is that it is not France's finest hour.

France has turned the laudable ideal of secularism into an institutionalised programme of intolerance. https://t.co/pdUrynATUw

You should be weeping, France. pic.twitter.com/Vn54GE4xlr

Ah nothing says freedom like forcibly removing a woman's burkini. Well done France! U have preserved secularism. Phew it was a close call!

popular
Vogue Williams slams man who refused to swap seats with her on plane
Mum charged with murder after allegedly leaving baby in hot car
This is the exact date the weather will get warm again
New Zealand family find two bodies in second hand suitcases
Are we getting a mini heatwave in September?
23 shows with four or more seasons to watch on Netflix
This is the easiest way to determine you may have VIKING heritage
You may also like
1 week ago
Actress Anne Heche in coma following car crash
1 week ago
The cost-of-living crisis is having a disproportionate impact on women, charity warns
2 weeks ago
Government approves new standalone stalking offence Bill
2 weeks ago
Man involved in Lady Gaga dog-walker robbery jailed for 4 years
2 weeks ago
Archie Battersbee's life support treatment to end at 2pm tomorrow
2 weeks ago
Shakira could face 8 years in prison over tax fraud
Next Page